This drought could easily be added to our long list of misfortunes to wallow in, having just survived a pandemic and record-setting wildfires, amongst many other setbacks. And it only takes a quick glance to determine the water level is down-WAY down—at Folsom Lake. What is usually a popular reprieve from the expected Sacramento Valley heatwave each summer, has now literally, and figuratively, turned into a hotbed for curiosity. Why is it so low? Who’s in charge here? When will it rain? And what are all these treasures that have suddenly reemerged from the waters?

It’s true, the idea of venturing out to a dried-up lake in the middle of sweltering heat has all the appeal of a root canal, no argument there. But in the spirit of staying local and staying active, we suggest planning a day hike at dawn or dusk (or both?) on one of our cooler days to engage in a little self-guided history lesson. Check the temperature, lather on the sunscreen, fill up your water bottles, and pack a snack—it’s time to adventure out.

There are bridges, walls, canals, trenches, old semi-paved roads, foundations, and even a hydropower plant left over from yesteryear waiting to tell you about their contribution in the name of progress—all still standing in a feat of impressive construction skill level.

There are also rock formations, petrified tree stumps, creeks, ravines, and herds of cattle that add to the sense of adventure. The discoveries are in abundance and last only as long as the next snowstorm season, when once again the water will pour in and these relics will be submerged until the next drought—which hopefully never happens.

Which ones have you discovered? How far have you trekked? 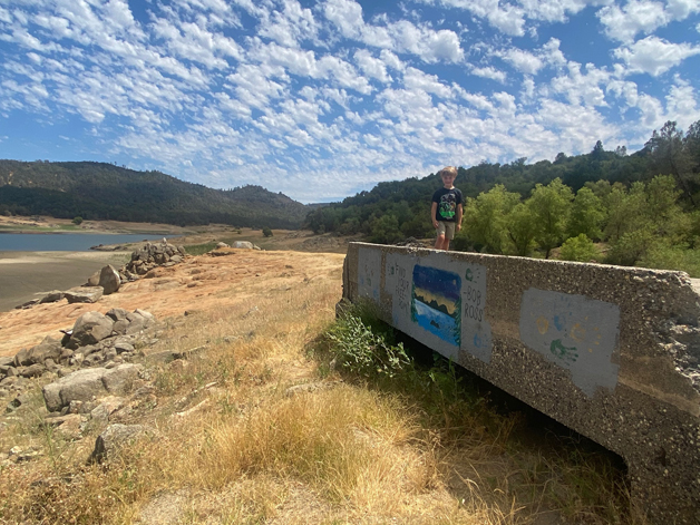 The Bob Ross art, along with the broken paved road leading to a half building with graffiti on it, is accessible from the Horseshoe Bar Road entrance in Loomis. When you walk into the entrance, you can walk straight out to the water and see both—one to the right and one to the left. 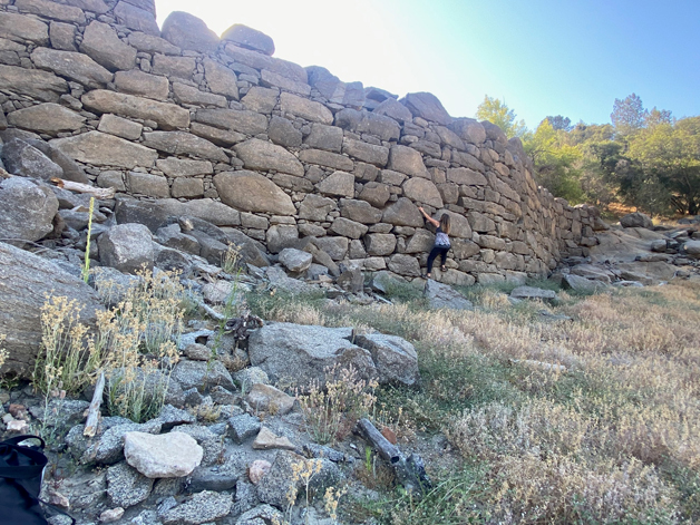 At the same Horseshoe Bar Road entrance, if you hike south toward Granite Bay, walk along the old canal until you reach the massive rock wall, about two miles. It looks like some sort of old dam, but it’s hard to say. The Hidden Bridge, aka Salmon Falls Bridge—which was built in 1925 and submerged after the construction of Folsom Dam—is fairly well marked on GPS, but around it you’ll see cairns at the top of the hill overlooking the bridge on the Peninsula Campground side. Also near Hidden Bridge are several foundations and stick teepees. Rainbow rocks and a historic landmark are both at Folsom Point.

The old, rusted metal machinery and chains can easily be noted on GPS as well.