THEN:
Reservoir Dogs: Original Movie Soundtrack
Okay, so it’s not technically a Halloween movie. But this is a track that took the Stealer’s Wheel AM radio hit “Stuck in the Middle with You” and forever tied it to a torture scene. You can happily groove to this soundtrack year-round, but throw it on at Halloween and you get a whole other vibe. It gets a little creepier. But in a good way...

NOW:
Halloween 2: Original Movie Soundtrack
It’s nice that there are people like Rob Zombie making gleefully scary movies that have equally cool soundtracks. The best thing about Rob Zombie is that he’s got a knack for picking nolstalgic tunes, songs that aren’t creepy at all...until they’re in his movies and then you’re creeped out for life. The Moody Blues’ “Nights in White Satin” will never be the same again.

THEN:
The Hollower by Mary Sangiovanni
Winner of last year’s Bram Stoker Award for “Best First Novel,” The Hollower is a new breed of monster story. A faceless figure that preys on people in moments of despair and self doubt, the Hollower manifests himself as their worst fear and torments people to the point of suicide. Fans of Stephen King and Clive Barker will appreciate Sangiovanni’s mastery of the “monster within.”

NOW:
Her Fearful Symmetry
by Audrey Niffenegger
Timed perfectly for Halloween, Audrey Niffenegger’s second novel is a ghost story set in and around London’s Highgate Cemetery. Author of the bestselling Time Traveler’s Wife, she brings a deftly gothic touch to this tale of family secrets, love, and the ghostly persistence of life, even after death. 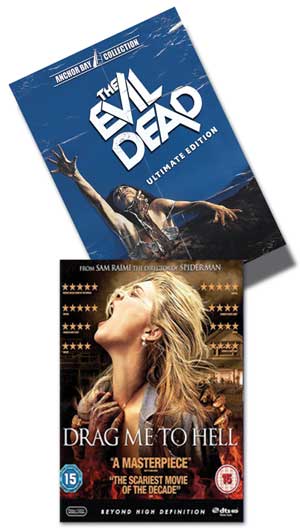 THEN:
The Evil Dead
Long before Scream, this groundbreaking horror classic from Sam Raimi (whom went on to direct the Spider-Man franchise), redefined the genre by mocking it mercilessly. Genuinely thrilling moments, outright ridiculousness, and a campy turn from B-list icon Bruce Campbell, make this flick can’t-miss cinema.

NOW:
Drag Me To Hell
Now one of Hollywood’s top directorial talents, the irrepressible Sam Raimi returns to spectacular camp-horror form with Drag Me to Hell. Simultaneously witty, unsettling to the stomach and downright scary, this film starring Alison Lohman and Justin Long is all about schlock value. Not for squeamish or young viewers.