The original hot hatch continues into its eighth generation. Is it still a deserving icon?

There are only a so many certainties in the world. Death, taxes, another obscure baseball record broken by Shohei Ohtani, Trump denying an election, and Volkswagen's Golf GTI. The German giant's extremely popular Golf hatchback, doused up in performance GTI trim, has amazingly been around now for nearly 50 years, debuting in 1975 at the Frankfurt Motor Show. It changed cars forever, proving that a practical and affordable, front-wheel drive hatchback could be great fun. Due to enormous successes, the GTI continues today, tested here as the new MK8 model. Is it still a winner? 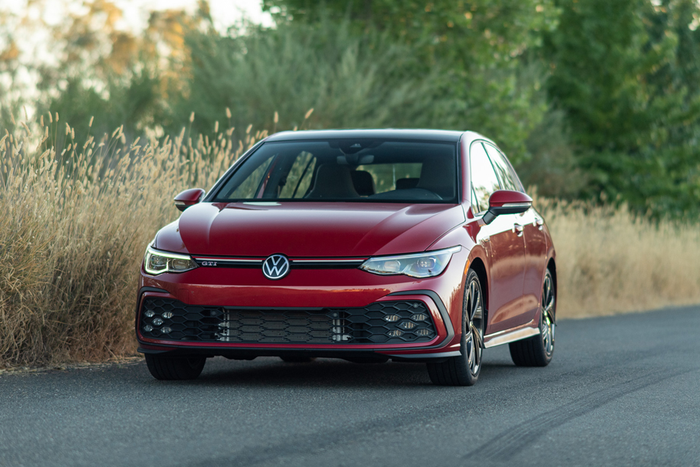 At first look, you might not be overly excited about a 241-horsepower hatchback, especially when base Mustangs and Camaros come with 300-horsepower engines these days. However, that 241 figure is a big fat lie. How do I know that? This GTI felt exactly as fast, if anything quicker, due to a strong turbocharged midrange surge, than my own 332 horsepower Nissan 370Z. Get your stopwatch out and the GTI, with the snappy DSG dual-clutch automatic, fires to 60 MPH from a rest in a rabid five seconds flat. Even after 60 MPH, the motor just keeps on pulling and pulling; it's insanely impressive and must be closer to real-world 300 horsepower. It's also miles quicker than a Jetta GLI, which has a similar power rating, and extremely well-matched to Hyundai's fundamentally brilliant Veloster N in terms of speed. Despite only sending power to the front wheels, there is some magic at play that makes it entirely usable no matter which direction you're heading. 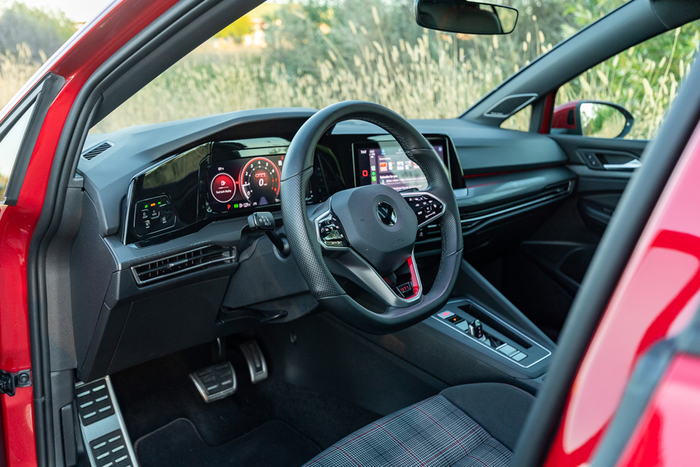 You might think that all that power comes at the cost of the front tires, being a front-wheel drive box at its core. However, Volkswagen is the world leader when it comes to front-drive refinement, with only a hint of torque steer when spooling the turbos below 10 MPH at its stonking 26 PSI peak boost pressures. After that, it's legitimately unnoticeable, and, thanks to some mechanical and electronic trickery, you can get on the power heavily mid corner and not face the dreaded unholy understeer that plagued past front-drive performance cars. Rather that pushing off over a cliff edge, the GTI can utilize its trick limited-slip differential to send power to the inside wheel and pulls you through a corner; it's mightily impressive. On a tight, twisty road, there isn't much that a GTI couldn't keep up with, as most roads don't allow a McLaren 720S to use all its power, and nor are most drivers able to extract even half of what a big Mac can do. You can definitely annoy supercar owners and influencers in your GTI and have a laugh about it later.

Which then brings us to the handling—it's good. While not as sharp or single-minded as a Veloster N, the GTI represents a deft blend of capability and everyday comfort while remaining quite fun and provocative when asked. You can turn off all the assists and relish in the playful balance easily and safely. And it does all this yet retains a reasonable ride quality, something a Veloster N can't do when you enter its “N” mode. The steering lacks outright feel, but once you're turned it weights up nicely and has a direct connection to the direction of your front wheels. At just 1.9 turns lock-to-lock, it's very alert, with a steering ratio that is more reserved for supercars. The rack is also variable, meaning the ratio quickens and slows the more or less you turn, but it comes across natural and confident. Sport mode in the GTI tightens up all responses and also brings a notable increase in exhaust volume that might not be to everyone's liking. Overall, from a performance perspective, the new GTI is an exhibition in outright aptitude, but also is entirely usable and livable.

For those concerned, gas mileage is excellent, with the GTI averaging an impressive 28 MPG during my time with it. As Borat would say, "Very nice!" 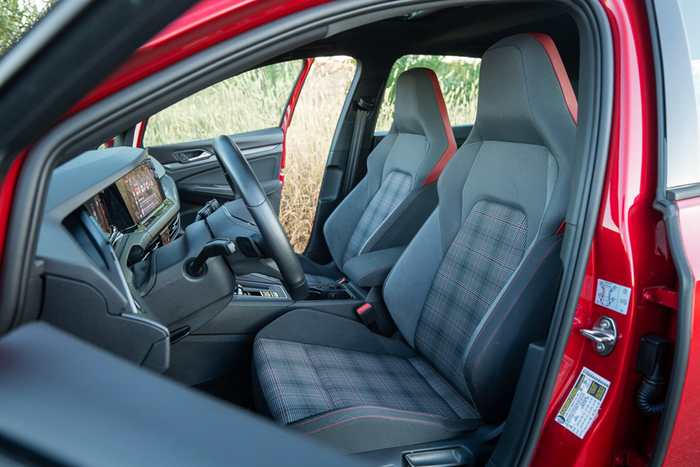 I was mostly happy with the quality of the interior

So, I mentioned that it basically drives excellent, but the GTI is not without fault—none of it has to do with how it drives, however. A big change for the new Golf is a redone infotainment module that removes almost all physical buttons, but that's not good. Not only is it clunky, but it's just too much work for basic tasks. Sometimes it responded slowly, too, and organization could certainly be improved. The screen that makes up the gauge cluster might be eye candy, but it's similarly difficult to navigate through. VW has gone all-in on this touchscreen interface, but I feel like they didn't do any testing with potential owners. Of course, the engineers behind it will know how to use it and think they hit the jackpot and praise their own intellectual prowess, but others, actual real people, will no doubt find it frustrating to use. And why the heck is climate labeled just “clima”? You couldn't add two more letters?

Somewhat related are the touch controls that are available in this GTI. You will not find a volume knob, rather, a bizarrely terrible touch sensitive +/- that you can either click or slide, located below the screen yet in-between some wonky secondary fan controls. It's hard to see at the angle it's positioned, doesn't respond accurately, and I also found myself accidentally adjusting the climate control next to it, since there are literally three +/- sliders all next to each other. Bad planning. 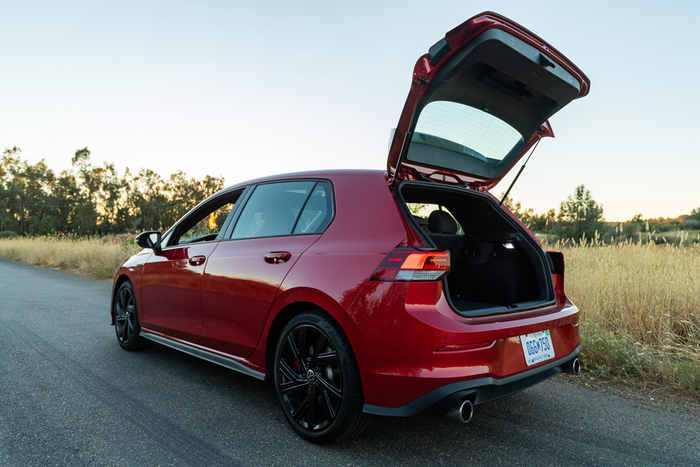 You could instead use the volume on the steering wheel, but like all the other too many steering-wheel controls present, it also doesn't respond well to neither clicks nor slides. Sliding barely ever worked when meant on purpose, and I found myself accidentally sliding against it and other controls at random when moving my hands on wheel at times causing screens or volumes to change. Steering wheels do not need slideable controls. Just no. Further, there are literally seven buttons for cruise control. Why? 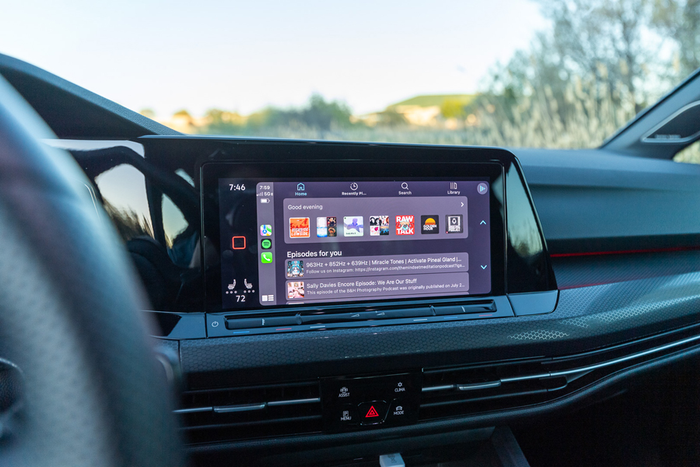 suffers from its wonky infotainment, touch controls, and the absurdly annoying safety bongs.

The user interfaces are not well-thought-out, but that's not the only knock on the interior. I was mostly happy with the quality of the interior, but there are some cheap bits that standout. Chief of which is the single worst center console cubby of any new car I've tested. Raising it brings out a nasty clicking sound from its plastic mechanism as you lift it up. Yuck. But also, you can only close it if you raise it all the way. If not at max height, there's a gear that freezes it in place. Not even holding the release handle defeats this—you actually have to lift it up to close it. So, it makes a terrible, cheap sound, and it's a struggle to close. Who signed off on this, VW? It's a freaking cubby cover—it's not that hard! 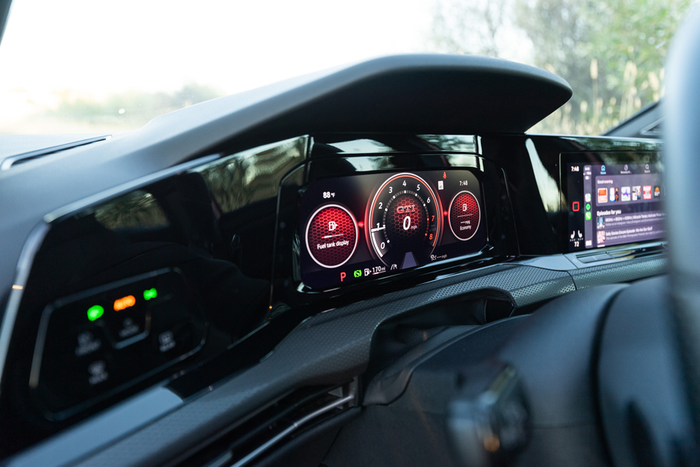 gas mileage is excellent, with the GTI averaging an impressive 28 MPG

Couple these issues with VW's trademark, industry-leading beeps and bongs. Did I say industry-leading? Yes, by that, I mean the worst. Maybe it's just for an American audience they don't think too kindly of, but the warnings beeps and bongs are horrendously loud. Don't even think about opening the door with the engine running while parked (or even with just the ignition on), because the loud blaring becomes unbearable. As I was taking photos and had the door open for interior shots, the bong was loud enough to completely outdo the radio. Curiously, it won't display this behavior when any door except the driver is opened. Passengers want to open doors at will? Have at it, I guess. Every modern VW displays this same annoying characteristic, and it must be because they think so little of the people that drive them. I would pay a decent chunk to someone with a computer to code out the sounds. 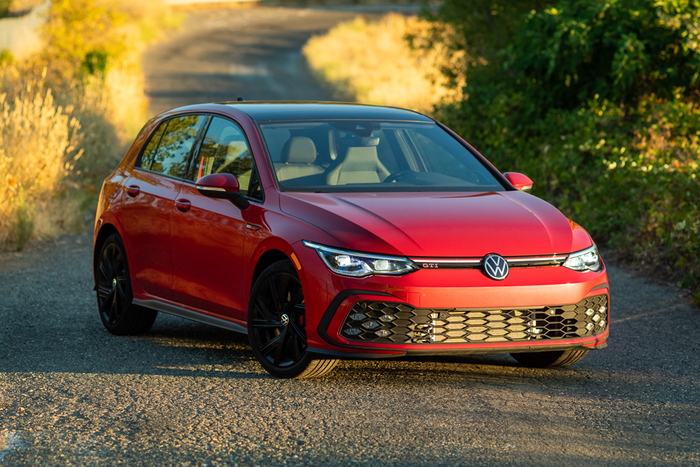 The MK8 Golf GTI is a terrific performance machine that can be enjoyed and used every single day, but as an everyday car, that's where it struggles. How does that make sense? Well, it's an amazing machine and crazy fast for the price, but its function as a car, your daily transport, suffers from its wonky infotainment, touch controls, and the absurdly annoying safety bongs. If you want a real dedicated sports car for the same price, the Hyundai Veloster N is the better choice still, however, you will sacrifice comfort and refinement. The GTI could be the easy default number one choice, as long as you can acclimate to the concerns on the inside: the invigorated, consummate performance icon blighted by bad tech. Eh, you'll probably still love it anyways.

Verdict: Affordable and practical with great performance and a serving of bad tech.