Acura’s venerable MDX SUV turned up a couple clicks after receiving the “Type S” treatment. Don’t overthink Type S, though, as it’s not the AMG equivalent for Acura (at least not yet, where’s the Type R, Acura?), yet this does bring a raft of hardware and tuning changes to make the most sporting Acura SUV ever. On paper, this new MDX Type S promises to be a more engaging and sporting SUV in their lineup to keep things interesting and hopefully fend off new and updated rivals in the luxury three-row SUV segment. 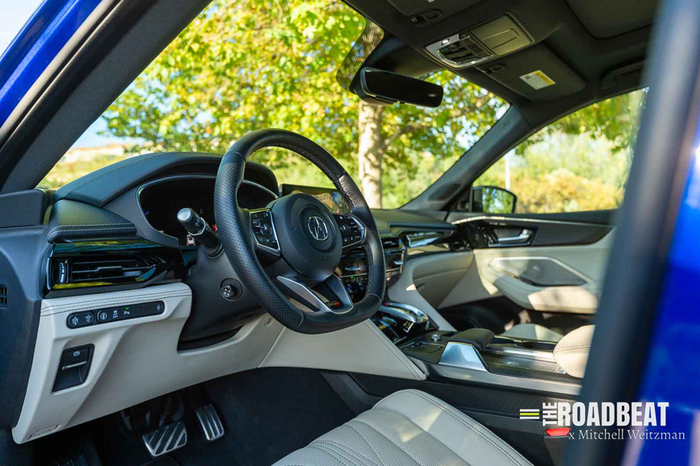 Like the standard MDX I tested last year, the MDX Type S does many things very well. It’s attractive for one, with the Type S wearing this gorgeous coat of deep blue paint. Other subtle tweaks to the fascias, different wheels, red brakes, and quad exhaust easily make this the best looking MDX ever. Can I mention how pretty the blue is again?

Inside is a luxurious and exquisitely crafted interior, with a fit and finish built to the same tight tolerances as the Hadron atom collider. The leather used is marvelously soft and the seats are rather excellent. The driving position itself is spot-on for an SUV with a great steering wheel feel, and this one even has seat massagers (they work decently well, too!). No occupants will complain of the luxury that’s on offer on the inside, though it’s not quite up to the level of the Genesis GV80 for theatre. And for those needing the extra space, this MDX also has a third row of seats.

Out goes the old naturally aspirated V6 in favor of a new, three-liter turbocharged V6 making 355 horsepower for an increase of 65 over other MDXs. Mated to a 10-speed automatic and Acura’s literal super-handling-all-wheel-drive, this MDX can scoot to 60 MPH from rest in 5.5 seconds when you get the blood boiling. At full tilt, that’s only about as quick as a base BMW X5 40i, but it is a huge increase over former MDX models, being nearly a full second quicker to 60. And also, it still has the same serene smooth V6 characteristics coupled with a nice sound when asked. 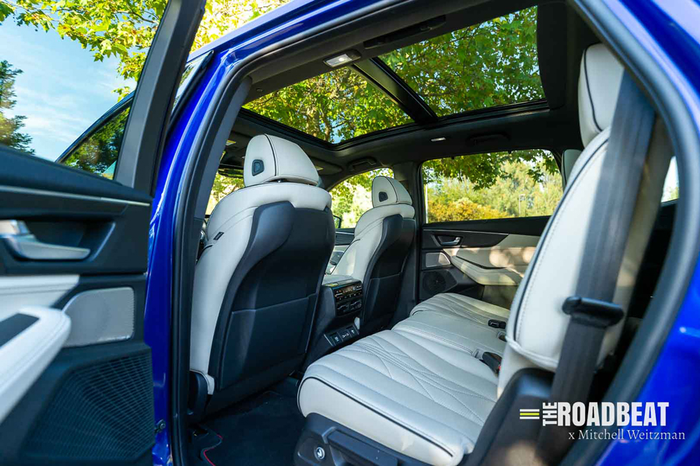 Inside is a luxurious and exquisitely crafted interior

When driving the MDX Type S in normal everyday errands, it doesn’t feel particularly special or engaging through the chassis, until you decide to push things a little, that is. Head to some favorite corners, build up some speed, and I was thoroughly impressed with the competence that this big SUV carries among its mass. I recently tested the smaller RDX and found a similar pattern of it coming alive when driven hard, and the Type S MDX is the same; the harder you drive it, the better it is. The steering is quick with feel to its assuredly weighted effort, and the tires dig in hard. That all-wheel drive works wonders to improve the driving experience, as it helps cancel out understeer and slingshots you out of corners. That same X5 can’t come close to the satisfaction that this chassis can produce. Even rapid transitions are done with grace and ease as the Type S changes direction. Well done here, Acura.

What can be better?

While the MDX Type S does lots of things well, as is the Acura norm for a being consistent, there are still things it can and should do better. 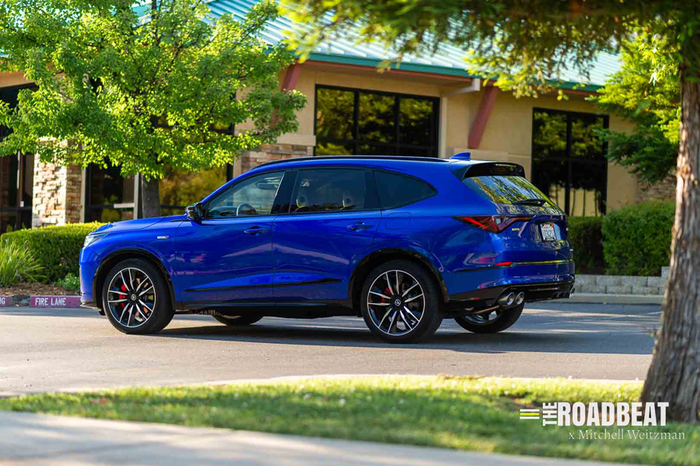 Gas mileage? Yeah, hope you’re not worried about that!

Gas mileage? Yeah, hope you’re not worried about that! Reason being is that I saw a paltry 18 MPG overall when driven quite easily. Don’t be thinking the smaller turbocharged engine gets improved mileage because it doesn’t. Let’s bring up the X5 again, a car that is as fast in a straight, but it can achieve a real world 23 MPG.

There’s more that’s wrong with the engine: explicit turbo lag. Turbo lag can be cool in some high-powered sports cars, but not in an SUV that’s meant for everyday, family driving. It’s expounded by an absolutely trash throttle response in its normal drive mode. When leaving from a stop, for example, I found a delay when adding throttle as nothing happens initially. I ended up applying too much throttle to get it moving at times, which then results in bad lurches as the engine suddenly builds boost and power, being especially noticeable on hill starts. Turn the drive mode to sport and it helps, but that also changes the programming for the transmission, too, and will hurt your mileage even more. There’s no excuse for poor throttle response in any car’s standard drive mode these days. Maybe they can fix it in a software flash. Normally slow turbocharged cars show this characteristic most prevalently because of their weak little motors that solely rely on boost, but this is a big V6 and it’s not acceptable. 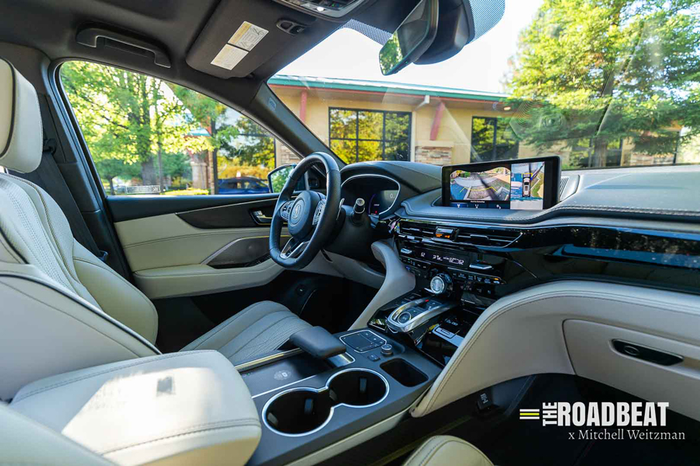 It’s a beautiful car inside and out

The 10-speed automatic transmission could be improved in sporting driving. In normal, boring cruising and errand-running, it's fine and does the job needed. But, when upping the pace, the transmission is missing charisma and finesse of the ZF eight-speed auto that is so commonplace these days. Full throttle redline upshifts are satisfying enough, but how often are you going to be doing those? It's the other places that will be far more commonly used where it falls behind the best. What doesn't help are paddle shifters that feel like they must've been pulled out of the Civic parts bin; they have no place in a $70,000+ car. While clicking the 'D' button again for a sports transmission mode increases the overall snappiness of the system; it's just not quite enough to be truly convincing.

The transmission also behaves weirdly when changing down gears. Pull the left paddle to drop down a gear, like if you're wanting to produce engine braking on an aggressive corner entry, and the shift not only takes too long, but there’s a pronounced moment in-between gears that resembles neutral, causing freewheeling. If you’re downshifting to help slow the car down, that lapse makes it feel more like the car is accelerating, not slowing down, and it’s quite unnerving. 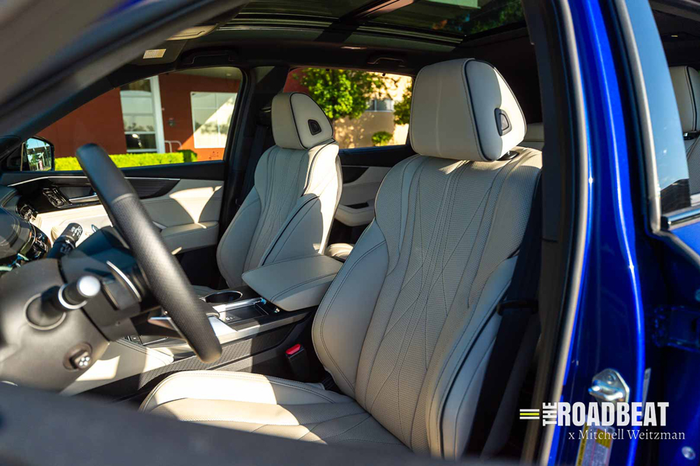 Like the last MDX and recent RDX I drove, this also has Acura’s new touchpad-controlled infotainment that is awkward to use (that's being kind, mind you). It’s uncomfortable not being able to lift your finger (or else it re-centers the cursor) and when you get near the edge of it. Perhaps the theory is there, but the execution isn’t. It also behaves differently when using Apple CarPlay where you (yay!) can lift your finger without re-centering. I also don’t like that I can’t turn off the splitscreen when using Acura’s own native navigation, meaning you can’t have the map on full screen; you’re stuck always having something on the side when I’d prefer a full view of the map to see better.

It’s a beautiful car inside and out, quite spacious, and the new turbo V6 adds some real thrust. As good as the steering and chassis is, there is no way around how thirsty and unresponsive the new powertrain can be, an average transmission, and a price tag that, at $74,000 (as-tested), is sweat-inducing and not the typical value you find from Acura. Yes, it’s far less than an SQ7 Audi or X5 M BMW, but those also are on whole other magnitudes of performance. In fact, the pepped-up MDX only really matches the speed of standard offerings from the German brands. The hardest part is justifying the $10,000 increase over still quite good MDX A-Spec fully loaded. It frankly needs more power or some missing fizz to really separate it from the pack. 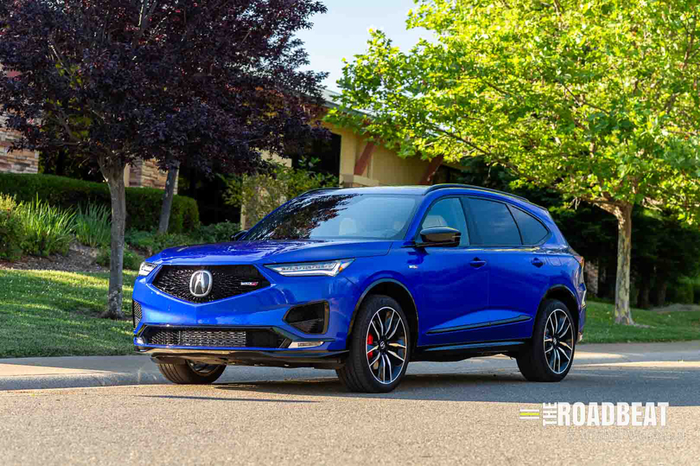 This MDX can scoot to 60 MPH from rest in 5.5 seconds when you get the blood boiling

Cons: Genesis GV80 interior is nicer; thirsty; not that fast.

Verdict: It's a better MDX, but it comes at a cost.