Game On: Trying Our Hand at Pickleball I’ve played tennis for a large portion of my adult life and I absolutely love the game. So, the first time I heard the term pickleball (PB) I giggled a bit and said incredulously “pickleball—really?”

Now, the time had come to actually play a little and see what all the hoopla was about. Because, if you haven’t noticed, it’s taking over every park and tennis club in the region and beyond. We were fortunate enough to play for the first time at Spare Time Sports Clubs’ Johnson Ranch Sports Club in Roseville, where you can now play on 24 brand new beautiful PB courts. 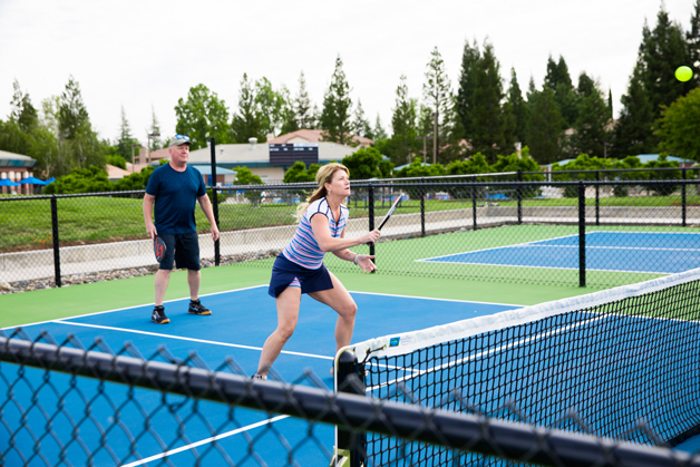 I’ve heard a number of descriptions of PB over the past couple of years, but you will see many describe it as a combination of ping pong, tennis, and badminton. You play with a paddle much like in ping pong; it’s light and essentially becomes an extension of your arm—like most racquet sports. The pickleball itself is hard plastic and is essentially a wiffle ball. For you tennis players, this takes a little bit of play to get used to as the ball moves and bounces differently. The game can be played both singles and doubles formats, and standard games are played to 11 points and must be won by a 2-point margin. (Tournament play can be 15 or 21-point games.)

You serve with an underhand swing to an area of your opponent’s side of the court. At that point, play begins much like any game. However, like ping pong, the ball must bounce in the opponent’s court before you can return. No volleys are allowed. The server, if they win the point, will then serve from the other side. This will go back and forth until that side loses the point and the serve moves to the other player or team. Then, play is on until one side hits out, misses, or nets the ball, and the serve changes sides. Like ping pong, you only score a point when serving. 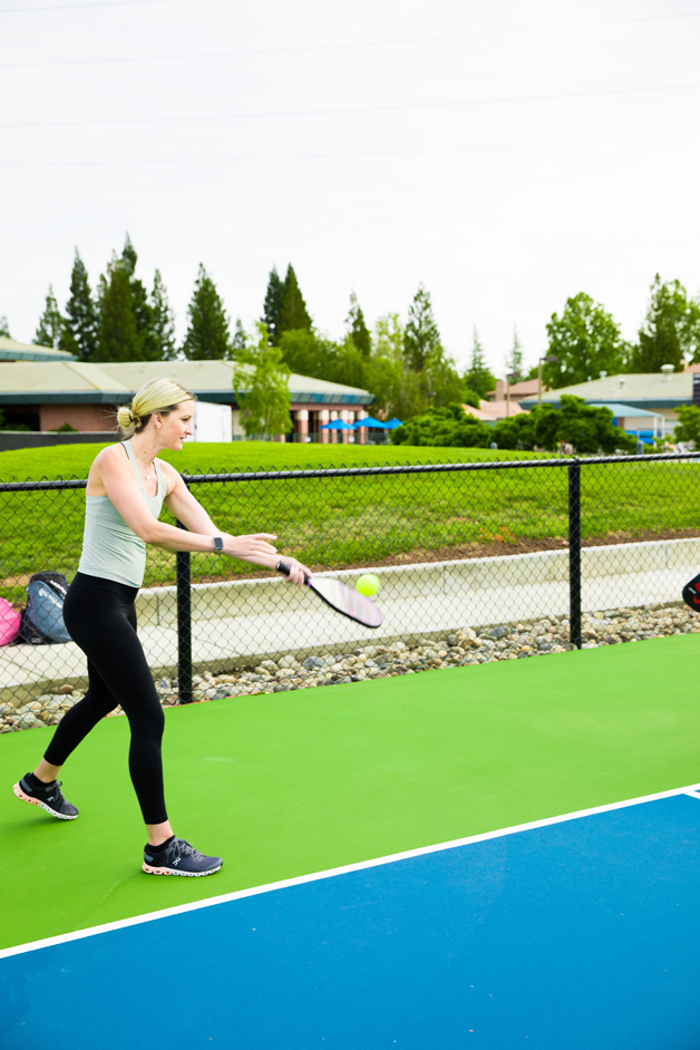 With the basics out of the way, we started to play a little and I quickly understood why everyone is playing this game—IT’S JUST FUN! You and your opponents are concentrating on play but there’s an intimate and fun feel about the whole game that comes across quickly. And, unlike tennis, the skillset to play is a little less complicated, yet, the mental side of the game and the strategy can be very intense.

I’m in the 55+ age bracket (my wife’s giggling in the background saying “add another +”). You might have heard that that’s the perfect age for this game—and you would be right, except, the statistics show that PB is being played by everyone from young children to those with even more ‘+’ signs than me! I would recommend that you get out there and give it a shot. Chances are you’ll get hooked, get a nice little work out, get those competitive juices flowing, and just have great fun with old friends and new. 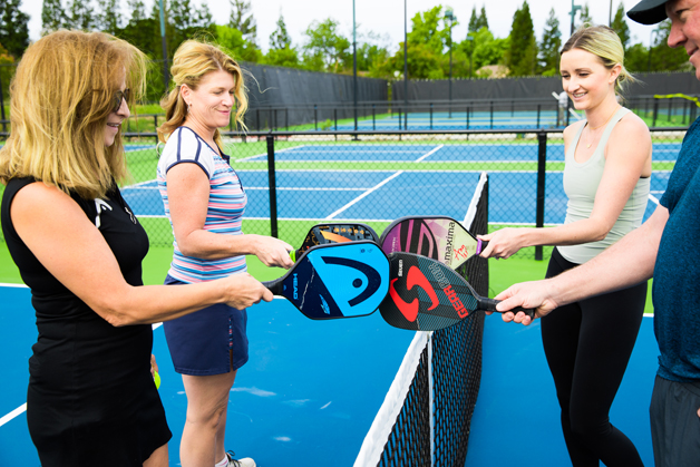 When you’re ready to hit the courts, you are going to find quite a few places to play. In fact, every community in the region offers places to learn and play this terrific sport, both indoors and outdoors. One great resource is the USA Pickleball Places2Play app. It will map out many of the best places to play the sport in your area.

You can always do a quick online search as well, and find that all our local communities offer courts in their parks, as well as instruction, tournaments, and more. Pickleball is a big deal and continues to grow at an incredible pace.

One standout is Spare Time Sports Clubs with locations that include Broadstone Sports Club in Folsom that has 8 courts, Gold River Sports Club that has 10 courts, and the brand-new expansion at their Johnson Ranch Sports Club in Roseville that boasts 24 new courts—making it the largest pickleball complex in Northern California. All of these clubs are perfect for both kids and adults, as well as all levels of instruction.