Off the Wall: 4 Must-see Murals Art is everywhere if we know where to look. Whether on a brick wall, inside restaurants, or in the heart of a community, local artists have given us the gift of art that embodies nature, culture, and history. The very buildings that have been a part of the hustle and bustle of our lives have become a canvas—an opportunity to remind us of our past, the beauty of the present, and the possibilities of the future.

Rubicon Trail by Oran Miller
Celebrating history and innovation in our community, local artist Oran Miller recently finished a mural inside the Thompson Jeep Automall in Placerville. After roughly 100 hours of work, Miller’s piece depicts the significance of the Rubicon Trail’s history. “It goes back to just after World War II,” Miller explains. “When the soldiers came home—they had a need for adventure, and the Rubicon provided that.” The mural consists of a roadmap, starting at the dealership (to commemorate the mural’s location), to Walker Hill, Loon Lake, Lake Tahoe, and other spots along the trail. Throughout the route are four different styles of Jeeps, the last one a depiction of “early Jeepers in their C.J. (Civilian Jeep) models, cruising around the corner and enjoying freedom and [family].” Ultimately, Miller’s mural allows us to take a step back in time while remaining rooted in the present.
@oran_miller.com 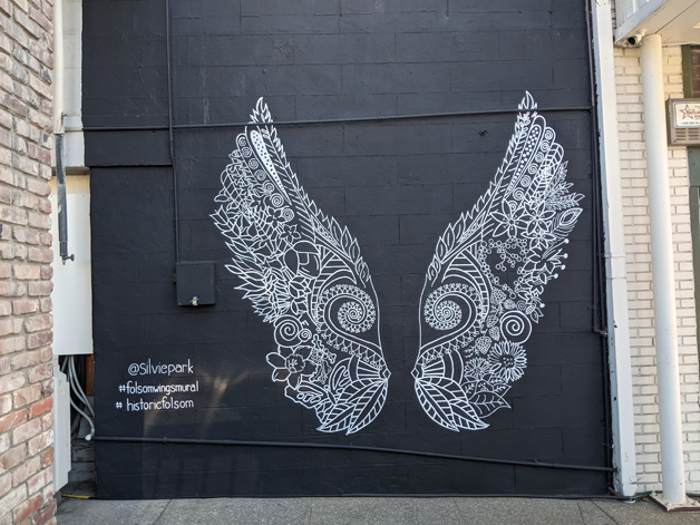 Folsom Wing Mural by Silvie Park
Since childhood, local artist Silvie Park has dabbled with many mediums: drawing, painting, ceramics, and murals. After coming across a photo of a pair of wings located in Nashville, TN, Park was instantly reminded of Folsom’s Historic District and the culture so heavily engrained in the downtown area. From there, the artist’s creativity gave flight to her first mural: a pair of angel wings that she donated as a voluntary community service project. The city’s motto, “Distinctive by Nature,” influenced her decision to make the mural nature-themed, which gave way to her research put into the project. Combining Folsom’s outdoorsy, culturally rich heritage—including features like the Rainbow Bridge, Johnny Cash’s hat, a bike wheel, and Winnie the Sutter Street Pig—the mural, sited on the corner of Sutter Street and Wool Street (on the side of Dorothea’s Shoppe) was created. @silviepark 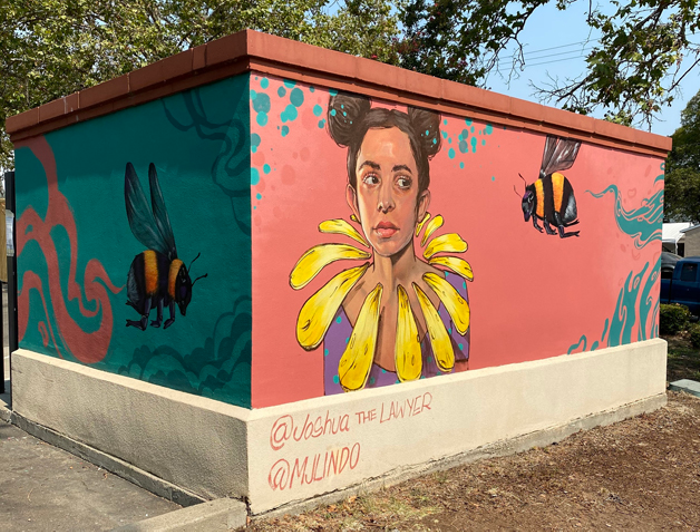 Drawn to Each Other by Joshua Lawyer & M.J. Lindo-Lawyer

Drawn to Each Other by Joshua Lawyer & M.J. Lindo-Lawyer
Located at Acton Academy Placer in Roseville, local artists Joshua Lawyer and M.J. Lindo-Lawyer collaborated on a mural titled Drawn to Each Other. M.J. kickstarted the process by choosing a reference they had photographed. Afterward, she created an outline of the main figure, and in turn, her husband Joshua was able to build upon it fashioning a story out of the art. Together they produced a narrative of what Joshua explains as “the natural attraction of a bee and a flower.” Then, there is a trail the bees are following, which Joshua says is “kind of a fragrance [the female] puts out.” When discussing the motivation for the piece, Joshua explains that they wanted “the narrative [to] be pretty playful and work in a school setting.” The difficulty, however, was in maintaining the simplicity of the mural’s narrative, which stretches across three walls of a cube-shaped building—a challenge the two overcame together. The final piece offers us a story of the natural attraction found in nature and between individuals, whether it be friends or more, and serves as an excellent piece for an educational setting. @joshuathelawyer
@mjlindo 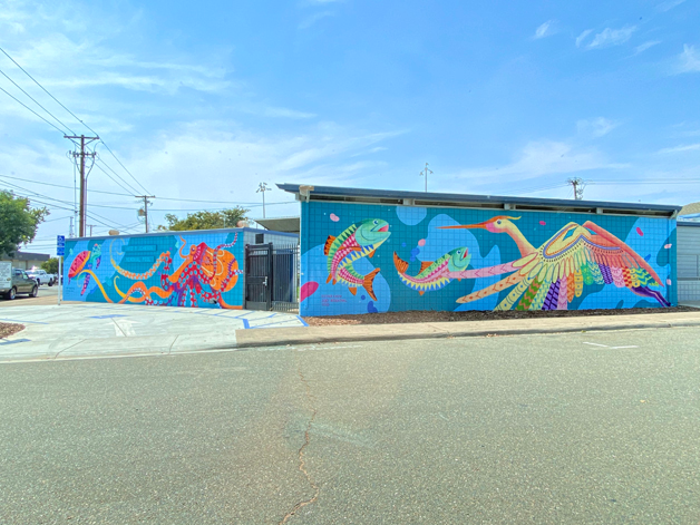 Land and Sea by Esther Chow

Land and Sea by Esther Chow
Inviting us to dive into Roseville’s David R. Johnson Memorial Pool is Esther Chow’s mural, Land and Sea, comprised of mesmerizing designs and the use of vibrant colors. The piece took about 12 days, says Chow, having collaborated with fellow artist Zoey Rosenthal. “We wanted something bright, fresh, and fun—something that would appeal to the community, especially the children and teens who frequent the pool.” As Chow contributed patterns and colors to the piece, her partner presented a bold composition and her love of animals, like the giant octopus. “The design was done in two phases” Chow further explains. After gaining approval for their first draft done on gouache, they created a mock-up on Photoshop to project the image onto the wall and then traced the outline with graphite. “Since the projection only works at night, we were on the streets till 3 a.m. the first day to get the design onto the wall,” explains Chow. Despite the grueling heat, Chow and her partner finished the mural, which celebrates the playful nature of the environment and our community while encouraging us to partake in our own fun, too.
@estherchow_art
by Bella Nolen
Photos courtesy of each respective artist.

11:00am · Modesto Centre Plaza
View All Add Your Event