Do you remember how, in the mid-2000s, everyone had a relative who owned a gold-beige Lexus? This is not that same Lexus. Lexus isn’t even Lexus anymore, it seems—not when they’re making the magnificence that is the LC 500h. Yes, the Lexus LC 500h is magnificent. Go ahead, stop reading now if you want and just drool at the pictures of this Flare Yellow example. I know I did when I was going through the photos for the first time.

This is the kind of car that when you park, you look over your shoulder in admiration, and more than just one glance. LC stands for Luxury Coupe, and is heavily reminiscent of the heralded LFA supercar, so much so that several bystanders mistook it for one. I could describe how the LC looks, but I’m afraid I won’t do it proper justice, so let’s just say it’s exceedingly beautiful in all the ways beauty exists. It might cost an eye-watering $104,540 as equipped, but it looks more special than cars costing over a quarter-million.

It’s a 2+2 grand touring sports coupe, made for crossing continents in the most absolute comfort and style possible. However, those rear seats are for those who regrettably picked the smallest straw, or for tiny children. A grand touring car should also have space to pack several bags as you head to your Santa Barbara getaway. Trouble is, the trunk isn’t what you’d call large. I usually overpack for no reason, so maybe the LC will finally teach me to plan outfits better. 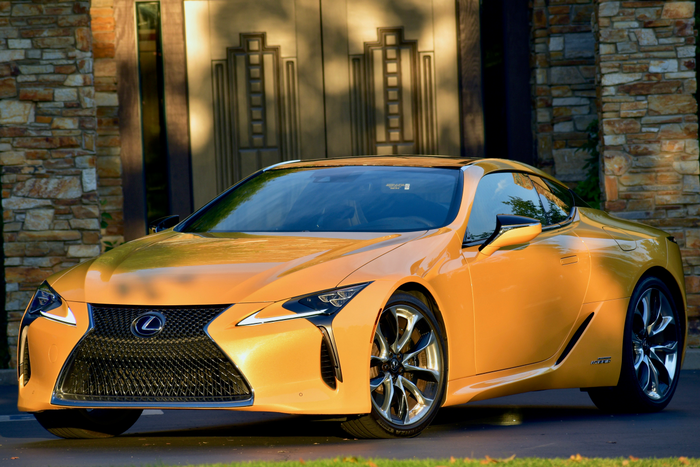 Yes, the Lexus LC 500h is magnificent. Go ahead, stop reading now if you want and just drool at the pictures of this Flare Yellow example.

How about that interior?

Ah yes, the cabin of the LC. Lexus must have the same leather supplier that Tom Ford uses, being sensual to the touch. The seat inserts and areas of the doors and dash are swathed in luscious alcantara so soft you find yourself petting the door panel for no reason. It’s tied together in extravagant shapes that envelopes you in an almost surreal way, as if you’re in the cockpit of a fighter plane. Raise your hands and grab the steering wheel and you’d swear this is the thesis of how a car should feel. The seats are the best I’ve ever sat in, with huge support from the bolstering, but comfortable enough to log hundreds of miles and still feel fresh out of the shower. In regards to the asking price, it’s together with the precision and exquisite attention to detail befitting not just a Lexus, but a Bentley or Aston Martin.

The only part indoors that doesn’t work is the nasty Lexus infotainment system that’s controlled by a little mousepad. Rotary knobs like in a BMW are far and away smarter and better. You do get somewhat used to it, but forget about operation while on the move. What is important, though, is just how special the Lexus is behind the wheel, and how special it makes you feel. 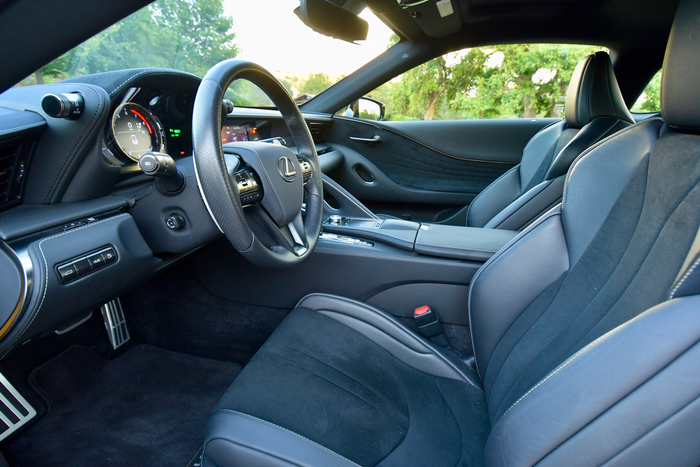 Raise your hands and grab the steering wheel and you’d swear this is the thesis of how a car should feel.

How does it drive?

This is where all the prior ingredients come to fruition to produce that aforementioned magnificence. The LC 500h is a superlative driving machine and easily one of the best vehicles I’ve ever driven. The steering seems to be telepathic and ideally weighted, striking a wonderful balance between lightness and heft. The ratio is quick, too, as the LC changes direction with a sincere immediacy, but it’s never abrupt. It’s strange how quick it reacts to steering inputs while still being so smooth to react. Yes, the steering is numb, but somehow the LC still appears as if you’re plugged into it like The Matrix.

The ride quality is excellent as well, shrugging off even the worst pavements while still retaining such excellent body control. It’s also whisper-quiet, even above 70 MPH.

The overall balance is quite neutral and only shows understeer when purposely overdriven. If you want to switch off traction control and be a hooligan, it’ll do that too. For a car over two tons and with such comfort, it’s remarkable just how capable, willing, and downright engaging the LC500 is. 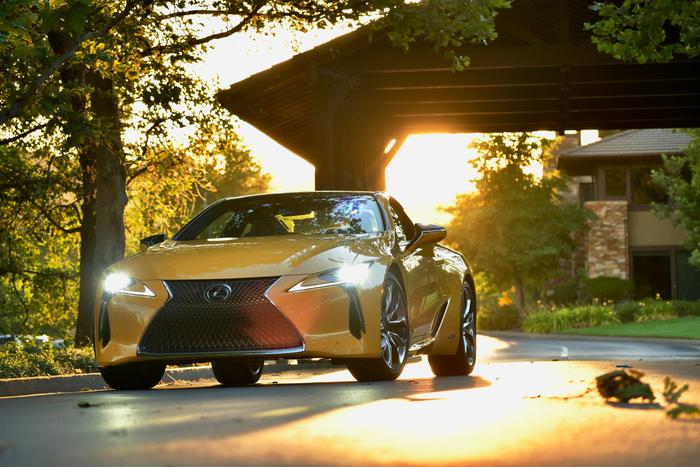 The ride quality is excellent as well, shrugging off even the worst pavements while still retaining such excellent body control. It’s also whisper-quiet, even above 70 MPH.

Yes, the “h” in the name stands for hybrid. So, what’s under the hood is a 3.5 liter V6 paired with two electric motors to give a combined 354 horsepower and 369 pounds of torque. Transferring that push to the rear wheels is a Continuously Variable Transmission that doesn’t feel like a CVT really at all. I’m not a fan of CVTs, but this is the best one in existence. There are large, metal, and positive paddle shifters to take control using the preset “virtual” ratios.

354 horsepower does seem low when compared to rivals in this decade. It’s enough, but the weakest part of the LC 500h is that the rest of the car is so willing, that it does seem nearly underpowered. 0-60 is still done in just 4.7 seconds, but you can’t help but think it should have over 400 horsepower. The fact that much more common GT rivals like a Porsche 911 or BMW M850i will blow its doors off doesn’t help, but the LC is for more than just speed. Do you think Monet rushed through his paintings?

The engine is very responsive, being naturally aspirated and aided by the electric motor’s immediate assistance, but it lacks that midrange shove that turbocharged engines provide. This is an engine that needs revs to get the most out of and is happy to do so.

Oh, and this is not a typo, but on a level 70 MPH freeway run, the LC averaged 39 MPG. 39! If only the Prius looked this good. Curiously, overall MPG was a much lower 24, though it is hard to resist stamping your foot down to the floor when the mood strikes you. And because it’s a hybrid, it will also engage full-electric mode at times, which can be rather nice when not wanting to wake the neighbors or sneaking into work a few minutes past your start time. 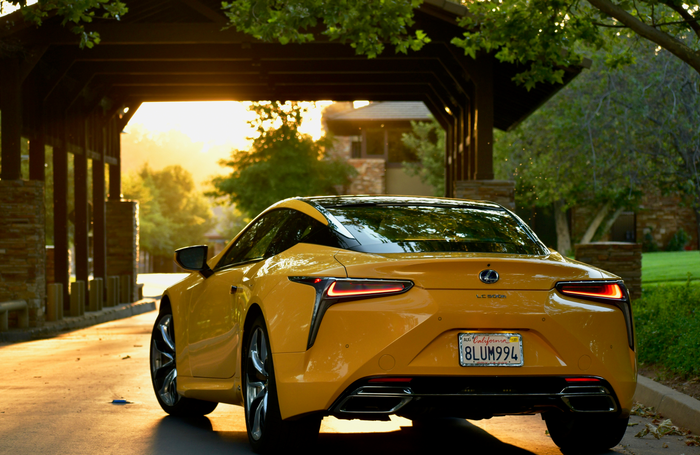 The Lexus LC 500h is a brilliant and beautiful machine.

The Lexus LC 500h is a brilliant and beautiful machine. Exclusive, too, much more so than German rivals, but nobody does luxurious grand touring the way this Lexus can. It combines mic-dropping, runway looks inside and out, and an entertainingly sweet chassis that pushes past grand touring into sports car territory. You know what the biggest problem with the LC 500h is? The LC 500. Yes, there are two LC 500s: one with a V8, and this hybrid ‘h.’ The V8 is several thousand dollars less, and has 471 horsepower, way more than this hybrid variant. Oh and it also conducts a proper V8 Ride of the Valkyries symphony when prodded. There’s also an even more excellent conventional 10-speed automatic with it. Sure, you won’t get the same mileage, but you’ll save initial money up front due to the lower MSRP. So, there you have it: The LC 500h is magnificent, but the “regular” LC 500 is even more.

Pros: Just look at it, that interior, the way it drives

Cons: I can’t afford one; the V8 is even better

Verdict: A sultry and beyond-luxury super-cruiser from an unlikely source

Mitchell Weitzman is a resident of El Dorado County and graduate of UC Santa Barbara. He’s been around cars his whole life and loves racing, such as Le Mans and Formula 1. Mitchell is also a seasoned driver with experience at Laguna Seca and Circuit of the Americas. He loves being able to tell a story through his words and pictures. Follow his adventures @road_beat.