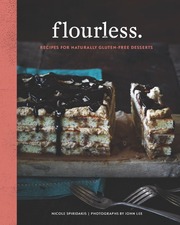 Because these brownies lack flour, they are more gooey than a traditional brownie, but I like them for that. It’s best to let the brownies rest for a few hours after baking—even overnight—as the longer they sit, the firmer they become. The finished product is “fudgy” and smooth from the melted chocolate. Cut the brownies into small portions, as they are very rich.


Heat the oven to 350 degrees. Line an 8-by-8-inch square pan with aluminum foil, and then lightly grease the foil with vegetable oil.
In a heatproof bowl set over simmering water, melt the chocolate and butter, stirring until smooth. Remove from the heat and transfer to a large bowl; add the brown sugar, eggs, cocoa powder, salt and vanilla. Stir well to combine. Spread the batter in the pan; smooth with a rubber spatula. Bake until the brownies are dry on top and almost firm to the touch, about 40 minutes. Remove from the oven and cool in the pan for one hour.
Gently lift the foil out from the pan after cooling to remove the brownies. Place on a cutting board and refrigerate for up to one hour to fully set the brownies. Remove from the fridge and, using a serrated knife, cut into 16 brownies. Serve at room temperature.
Store in an airtight container at room temperature for up to one week.

Ninkasi Brewing Company is a budding new brewery out of Eugene, Oregon, that’s beginning to gain popularity in the craft beer community. Started in 2006 and named after the Sumerian goddess of beer, Ninkasi is known for its full-flavored and hop-centric brews that tantalize the palate and stretch the boundaries of different beer styles. One great example of this is their Vanilla Oatis Oatmeal Stout, which takes the traditional flavors of quintessential oatmeal stout—roasted malt, chocolate and smooth oats—and infuses fresh vanilla bean to create a delicious and velvety, 7.2 percent alcohol-by-volume brew. Pairing the Vanilla Oatis with this month’s Double Chocolate Brownies is a no-brainer—they’re both decadent and sweet, with just a touch of the chocolate for bitterness.
—Heather Zamarripa, Executive Chef, 36 Handles Pub & Eatery