"Ask no questions and you'll be told no lies,” said Dickens in Great Expectations. It's not easy to disrupt establishment, especially one so programmed into their lease-cycles of the latest BMW or Mercedes 7 and S-classes. However, ask questions, and you might be surprised at what you find in the direction of Genesis, a brand that has quickly come to be known for their own great expectations. 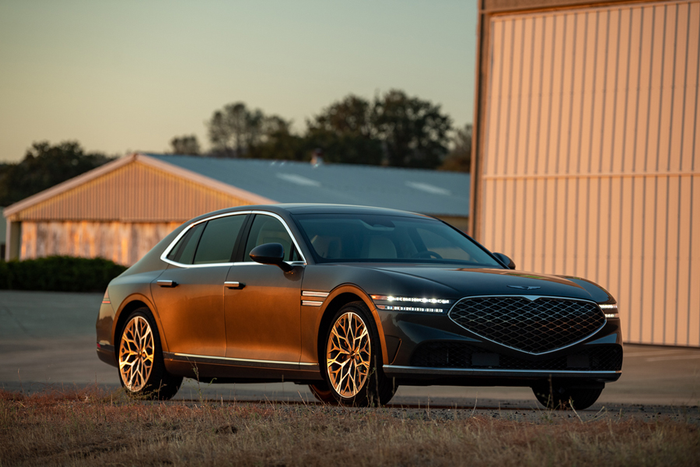 Their G90 sedan is no exception, being a total belter right out of the gate for a laundry list of reasons.

Meet the redesigned Genesis G90, the flagship sedan from the South Korean luxury brand, itself a subdivision of Kia/Hyundai. Don't be fooled into thinking this is just a fancy Sonata, though, as the G90 is a luxurious yacht ready for the A-list leagues. With German luxury flagship prices steadily creeping up year after year to a new tax bracket, Genesis undercuts them all while compromising next to nothing with its exceptional quality and genuine air of charisma. You'd have to be silly (and in need of a CT scan) to consider spending more on BMW's gross new 7-series…

Genesis, in case you and millions of others might have missed it, is on an absolute tear right now, producing banger after banger; The current automotive equivalents to Jack Antonoff or Mark Ronson. Their G90 sedan is no exception, being a total belter right out of the gate for a laundry list of reasons. 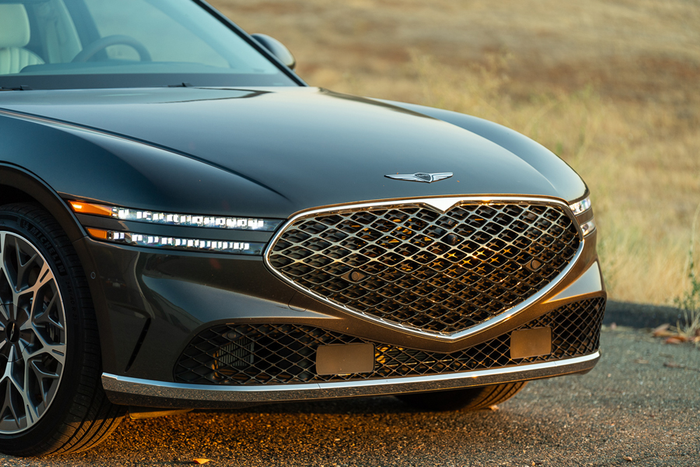 The unique and cohesive front and rear lights add to the appeal.

It's got plenty of it, being reminiscent of a luxury yacht. Not just any boat, though, as I'm thinking of Leonardo DiCaprio-in-the-Mediterranean-partying-with-young-models kind of yacht. Or, basically a scene from Wolf of Wall Street. Anyways, it's damn impressive, with a menacing presence courtesy of that gaping grille that somehow isn't too stupidly large in person. I dug the tapered creases and flat surfacing that help give an almost-vintage appearance, capturing some of the majestic legacy that defined older Rolls-Royce and Bentley models even. The unique and cohesive front and rear lights add to the appeal. Look, pull up to an event, whether you're driving or being driven, in one of these and people will be looking for the right reasons. 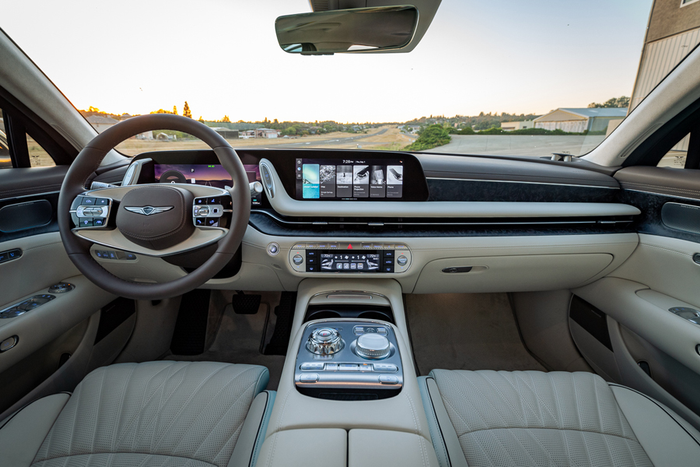 Leather, wood, and metal are bountiful in every direction and the feel to the touch encapsulates the essence of excellent

A fancy and decadent interior highlights each drive and experience in the G90. Leather, wood, and metal are bountiful in every direction and the feel to the touch encapsulates the essence of excellent—I'm attempting to sound even remotely sophisticated as the G90 is, such is the sheer joy of being inside one. I spent time playing around in a new Rolls-Royce Cullinan just a week prior, and while okay, sure, the G90 isn't quite to the level of the behemoth from Goodwood, it's not nearly as far off as you'd think. And it's not like the G90 is short on theater, either, with plenty of show-stopping points inside to catch and hold your attention. 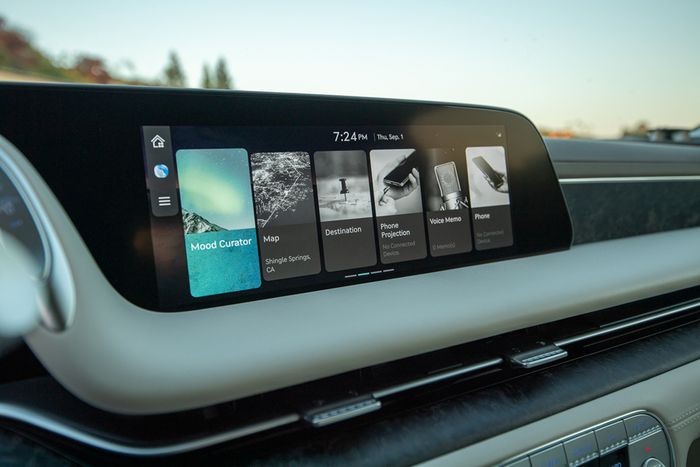 Items like the gorgeous and huge center display screen (and very well integrated into the dash), metal switchgear, massaging seats in the front and rear (and they work well), and just the insanely dreamy levels of comforts from the chairs themselves are all awesome. Oh, and you can press a button to close the doors for you, front or rear - That's one worth showing off. Space is gigantic in any and all seats, with room for LeBron in the back even. Really, you could just actually fit the starting five for basically any NBA team in here with total comfort. For some added rear seat entertainment (and annoyance depending on your friends and kids), passengers in the back can control virtually (and literally) almost all aspects of the vehicle’s entertainment and climate via their own controls.

But, objectively, nothing the G90 does here is unique. However, what makes the G90 so special is the fact it does all this at a price way below what you'd pay elsewhere for the same features and/or refinement. The one other big luxury sedan that also offers a value play is the Lexus LS, but the Lexus is left for dead by the Genesis.

If the G90 drove like a motorized outhouse, I guess it wouldn't be all that bad considering you could have someone else merely drive you instead, but thankfully the G90 impresses here, too. Behind the wheel, things are slightly isolated, but isolation is a trait of grandeur, so it would make sense that G90 isn't a daring driver's car after all. Competence is the key here, with suspension that prioritizes comfort yet retains composure for when you're late to that morning merger meeting. There is lots of mass here, 208" and nearly 5,000 pounds of it, but the G90 handles quite well altogether, never embarrassing itself when you decide to be rude behind the wheel. It may wallow, but neither is it deflating. 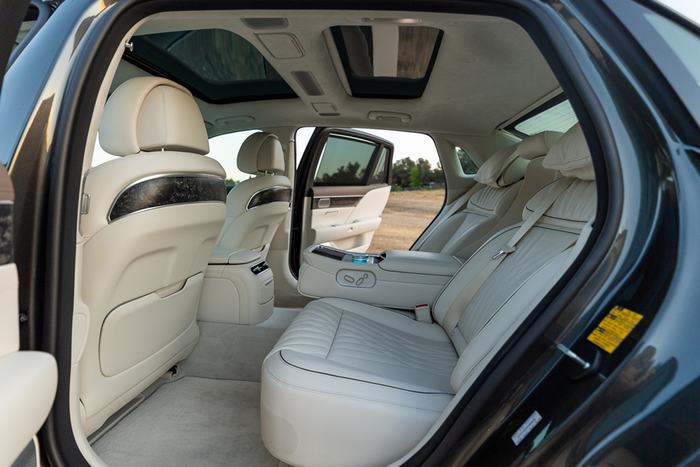 The best environment is when you're on the highway, cruise control set, and the G90 is superbly quiet and refracts almost all environmental intrusions. As a passenger, it's probably one of the easiest new cars to fall asleep in. For the driver, the steering tracks scientifically straight with no wandering, and there's also an impressive semi-autonomous steering mode, which I guess would be useful for when Mike calls and tells you the merger is in trouble.

Performance doesn't disappoint, but neither is entirely impressive, though I also don't think it's of high importance really in a vehicle like this. Nevertheless, the 409-horsepower made by the new twin-turbocharged and supercharged V6 is only merely adequate, with 0-60 MPH taking 5 seconds. Throttle response is great, helped by the immediacy that comes with supercharging to fill the spooling gaps left by the turbochargers, and the power is enough to get you anywhere faster than necessary. However, it does fall behind what Mercedes and BMW offer for those that care about that aspect.

Also of note was the flatly average fuel economy from this new powerplant, seeing just 22 over the course of our week together. For vast machine, that's okay, but other six-cylinder models from both big Germans both have greater speed while also drinking less gasoline. 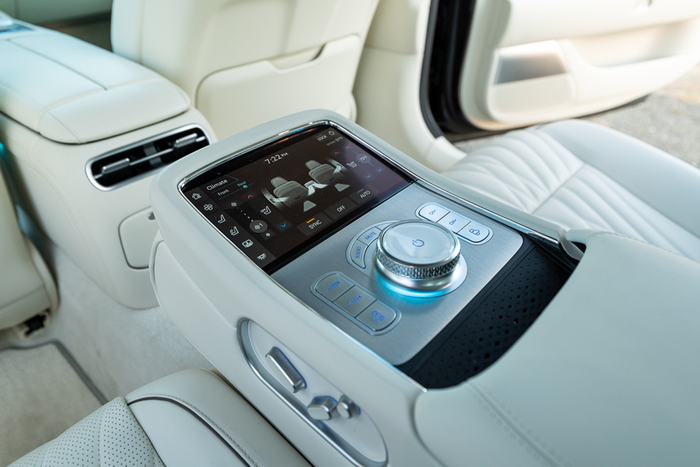 Passengers in the back can control virtually (and literally) almost all aspects of the vehicle’s entertainment.

The doors are a cool item to show off, with the driver's door closing automatically upon depressing the brake pedal (as if to start it), but I actually grew to dislike the doors, finding them overcomplicated and fussy. To open the doors from the inside, you press a button, and it releases it electrically, but it doesn't pop open it very far. And then when pushing it open, you are sometimes met with resistance from the electric motor inside it so it's just never really that smooth nor consistent in effort. This behavior is further exaggerated when parking on even a slight uphill slope, where, without any mechanical detents to hold the door in a spot, the door fell and closed on me. I like the idea and all - it's a cool party trick - but in the real world I just didn't like the doors all that much.

Pricing is markedly less than similarly equipped rivals of German descent, but the savings are not as great as they once were. Two years ago, I tested a G90 Ultimate that stickered for less than $80,000. This new model, in range-topping flavor, does breach the $100,000 mark, if barely. While it's still less than a comparable 7 or S-class, the price is now closer than it was before. And Genesis really must ask itself, "How many people will plop down 100 large on a car they haven't heard of before?" Because when it comes to luxury, brand recognition can be as important as anything else, and the Genesis branding does indeed lack the household prestige of Big German.

Despite a couple of flaws, the G90 is a potently theatrical device that will satisfy anyone's appetite for the finer things in life. The fact that it does so at an attractive price sweetens the deal while rarely compromising on attention to detail and the fit and finish on hand. Whereas the S-class is subdued and almost boring appearing, and the new 7 is just plain hideous, I think Genesis has the best-looking flagship sedan now in the segment, too. Looks always help. Like most all Genesis products now, they are more than worthy of your gaze and consideration. 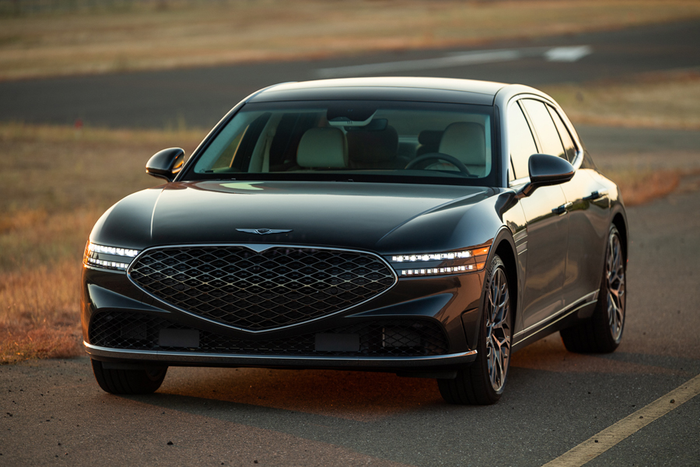 Pros: Great style inside and out; astounding luxury and value.

9:30am · Bright Beginnings Preschool
View All Add Your Event