Nachos are one of the most crowd-pleasing cuisines. Perfect for sharing, and as an appetizer or a complete meal, they pair best with football, friends, and a cold beer. From the classics done right (fried chips and melty cheese) to more creative preparations (smoked brisket and charro beans! ahi and avocado!), they’re fun to eat and hard to hate. If you don’t feel like making them at home, level up with this local roundup of the most popular plates found ’round town. 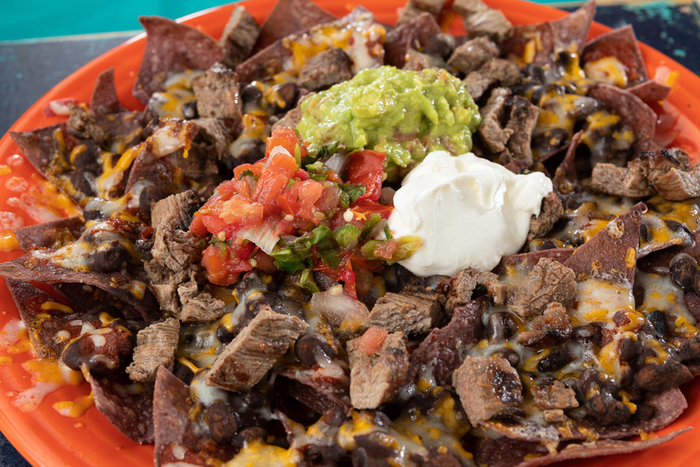 On Dos Coyotes' opening day in January of 1991, their Santa Fe Nachos were on the menu. They’ve stood the test of time and are considered one of the café’s most popular items. Everything on them is made in-house, including the red chipotle sauce that’s got both notes of honey and spice. A hearty helping of jack and cheddar cheese top blue corn tortilla chips, while whole black beans, sour cream, and guacamole complete the masterpiece. If you want to pump up the protein, pulled pork, chicken, or steak can be added as well.
13385 Folsom Boulevard, Suite 100, Folsom, 916-351-9750; 2030 Douglas Boulevard, Suite 4, Roseville, 916-772-0775; 1200 Athens Avenue, Lincoln, 916-408-7777, doscoyotes.com 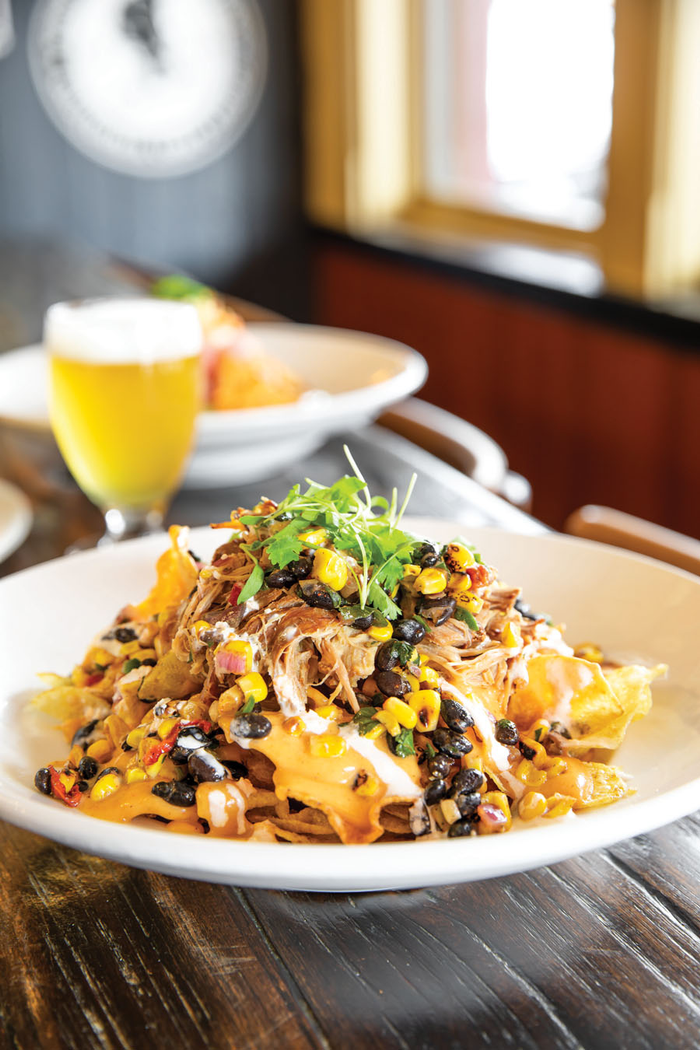 If you can’t decide between potato chips or nachos—or if you simply adore potatoes with cheese—head to Placerville Public House for their Pub Nachos. A plethora of the toppings are made in-house, including the fresh beer cheese sauce that's crafted daily. Green onions and a black bean corn salsa add some freshness while shredded carnitas bring a hearty balance. Topped with spicy habanero sour cream, you get a hot yet refreshing blast of flavor with each bite.
305 Main Street, Placerville, 530-303-3792, placervillepublichouse.com Barbecue-meets-nachos with a decadent order of the Brisket Nachos at J. Wild’s Livery & Feed. The star of the show is the namesake brisket, which is from Creekstone Farms and slow-smoked to perfection. The smoky meat is cubed and blends nicely with cheese sauce, which is house-made daily. Charro beans (a barbecue bean with Hispanic origins) brings a little kick and spice. You’ll also find delicious bites of onions, jalapeños, bacon, crema, and guacamole.
614 Sutter Street, Folsom, 916-353-0140, jwilds.com The Spicy Poke Nachos from Goose Port Public House are the perfect shareable while watching the big game on one of their flat screens or listening to live music. Diners can expect sashimi-grade tuna atop crispy wonton chips with some tasty toppings to boot (spicy serrano peppers, sweet chunks of pineapple, and green onions). The grand finale? Creamy sriracha aioli and sesame teriyaki sauce. And if you love tuna, it’ll only cost you a few bucks more for an extra helping.
316 Vernon Street, Roseville, 916-886-5080, gooseport.com Crunchy tortilla chips truly get loaded on the aptly named Loaded Nachos from Bar 101. Fans of classic nachos will be pleased with this offering that features a blend of jack and cheddar cheese alongside familiar players like jalapeños, refried beans, black olives, pico de gallo, sour cream, green onions, and house-made guacamole. Customize your order by choosing between a generous portion of carnitas, ground beef, or shredded chicken.
101 Main Street, Roseville, 916-774-0505, bar101roseville.com If you’re a sushi fan, then the Ahi Tuna Nachos from Sienna were made for you. Traditional tortilla chips are replaced with crispy wonton chips (so you’re still getting a good crunch) and topped with sushi-grade ahi tuna, red tomatoes, chunks of avocado, and a sprinkling of cilantro. In lieu of cheese, the dish is topped with sriracha mayo for some creamy heat, accompanied by a soy ginger glaze for a dash of sweetness.
3909 Park Drive, El Dorado Hills, 916-941-9694; 1408 Eureka Road, Roseville, 916-771-4700; siennarestaurants.com