Acura's Integra, a new compact sedan that revives the name of some of Honda's and Acura's best driver's cars ever from the 1990s and early 2000s. Some people say the new model isn't worthy of the Integra name, which is bizarre given the Integra was always just a cheap economy car. They made a couple Type Rs and suddenly it's sacrilegious to call anything the same unless it's the second coming of Jesus himself. The Integra cult, it's real, man. This new model is essentially a rebodied and remodeled Honda Civic. The Civic is an amazing vehicle, so I have high hopes. Oh, and this example has a delightful six-speed manual transmission. This new model is essentially a rebodied and remodeled Honda Civic.

Starting out with the Honda Civic Si as a donor car, the Integra A-Spec here is basically just a better, more luxurious, Civic. By no means is that an insult, as I genuinely love the new Civic. While lots were quick to criticize the Integra when it was first unveiled in photos, I can confidently say it looks far better in person. It's not particularly exciting looking, no wings or anything to see here (at least not yet), but it is a handsome car. But the best is when you open the door, greeted by swaths of gorgeous and sumptuous red faux leather in the cabin (some of the best synthetic “pleather” in the business). Furthermore, there are lots of soft touch points and luckily all the controls and switches don't feel cheaply flimsy. Seriously, this is a decently luxury interior that meets the expectation of the Acura badge (Acura, after all, is the luxury division of Honda). As a better-appointed Civic, the Integra succeeds here. But the best is when you open the door, greeted by swaths of gorgeous and sumptuous red faux leather in the cabin

With the Tech package equipped (an obligation if you want the stick shift), there's loads of equipment and features, even though that's to be expected now at this price point. For a car costing $37,395, it has nearly everything you could ever wish for, like the head-up display, safety features, and an impressive stereo.

Honda has always had a knack for slick shifters, and the unit on this Integra is no different, with pleasing and precise throws and engagement. It's easy to drive, too, with light effort and feel through both pedals and stick. I personally prefer a little extra weighting to both foot and hand controls, but it's a proper pleasure to use and row gears. The gearing is short, too, which lends a hand to perky-feeling acceleration and also allows the user to shift more often, which is a good thing given how fun it is to do so. And it's also quite frugal, burning a gallon of gas every 30 miles in my time with the Integra. It has nearly everything you could ever wish for, like the head-up display, safety features, and an impressive stereo.

Handling is basically perfect for an everyday, front-wheel drive car. Are there more focused cars with higher limits? Sure, like the Veloster N, or the forthcoming Civic Type R, but both of those are compromised elsewhere with an MO of track performance. The Integra won't be as happy on track, but on the road, where it's been designed for, it's a hoot. Steering is wonderful, if lacking some feel, but it's quick and oh-so direct. Chuck the wheel one way and the car responds intuitively to your liking. The front bites long enough until the tires gives out, but the balance really is damn impressive in how fluid and neutral it is. There's even some body roll to help with confidence and allows you to lean on the outside corner when pushing things, and pushing it safely at non-outrageous speeds. TL/DR: this is a fun car! Eh, that engine. No, it's fine, it really is, but being significantly more expensive than a Civic Si, you would hope for extra power. Yeah, no. The Integra A Spec is only working with 200 horsepower here from its 1.5L turbocharged inline-four, and while the short gearing gives the impression of some quickness, it just isn't fast enough. 0-60 MPH, for example, takes 7 seconds. For contrast, an everyday Golf GTI MURDERS this car in a straight line. Sure, it's a bare-bones outside in terms of interior refinement and quality by comparison, but it goes to show how much speed is available in this price range now. I noticed there aren't even air vents for the back seats

Why would this not have the same spec 272 horsepower 2.0L four-cylinder that the Acura TLX has? Or at least something in the middle. At least I can say that the engine is smooth and avoids sounding like a garbage disposal that other four-bangers can do remarkable impressions of. Also of note is the quiet exhaust on the Integra. Remember, this is trying to be a civilized luxury car. And then there's the price, coming in at $37,395 as equipped with the desirable Tech package. It's not just a couple grand more than the Civic Si on which it's based, but some $7,000 more? Yikes. I noticed there aren't even air vents for the back seats, relying too much on the economy skeleton that is the Civic underneath. And similarly, the seats might be impressive, but there are too many other details that are plainly a Civic and doesn't do enough to distinguish itself in terms of quality. That said, the new Civic is a huge step forwards from the old one by fit and finish. While it makes for a nice starting point, it'd be nice to have more of its own design.

The Integra A Spec is easily the best Honda Civic currently on sale. Think of it as just a Civic with the luxury turned up and, if anything, one that's even better to drive. However, to get the well-equipped A-Spec model with a manual like tested here, you gotta pay for it, and it's frankly too much. It's the better Honda Civic, but one that's been priced basically out of contention once you consider the performance you can get from rivals. One drive in a Veloster N and I'd be like "Yeah, I'll trade some leather for this." To make the Integra make sense, it needs more to identify itself as a unique offering. I'll be here waiting for a Type S, Acura. 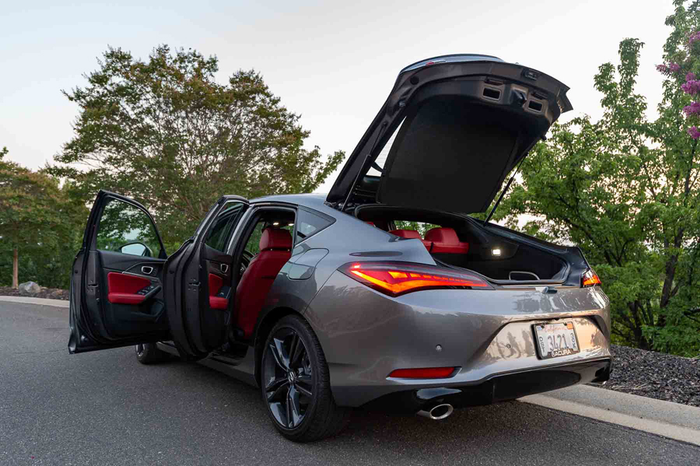 I can confidently say it looks far better in person

Cons: It costs how much? Too slow.

Verdict: The better Honda Civic, but it's too expensive.