This is an old-school hot rod. Only the Orwellian electronic nannies hold it back from stardom

This is not an IS F. Yes, it's not a replacement for the preceding V8-powered sports sedan from nearly 10 years ago. No, for this is an F Sport model, gaining the “IS 500 F Sport Performance” moniker to sit atop the IS range. Want a proper F-car? There's the RC F coupe still available. To F or not, the IS 500 is an absolute riot of a car, and one of particularly excellent value. For your dough, you get a wonderful, snarling five-liter V8 with 472 horsepower that forgoes turbocharging to instead swallow our atmosphere all on its own—much like an Olympic runner. There are shortcomings that separate this from a full-stop F-car, though, but it's a showering of attitude and fun all on its own. 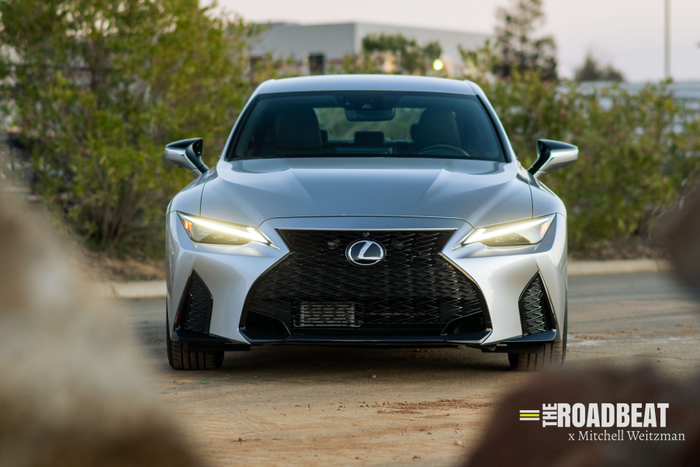 To start with, despite the girthy and grunty motor and the barbaric sounds it emits, this isn't actually that fast of a car.

Many aspects: from the dinosaur heart under the hood, the luxurious and quality cabin, sexy sharp looks, and a capably natural rear-drive chassis underneath. To start with, despite the girthy and grunty motor and the barbaric sounds it emits, this isn't actually that fast of a car. Blame the circa 4,000 pounds it has to deal with moving at all times, but even with 472 horsepower, it's quick, just not that quick; A BMW M340i feels faster everywhere due to its walloping turbocharged punch. However, with a 0-60 MPH time of under 4.5 seconds, it still rips, and the sounds emitted from the inhaling intake are an aural treasure that will one day be remembered in natural history museums. It's a powerplant that needs revs to really work, sacrificing flexibility for a top-end rush that is all too fun and bad for license points because of how it encourages you to do so. It's not the fastest thing on the block, but it does so in such a memorable way and requires work and involvement from the driver to get the best out of it. In other words, it's the engine of a driver's car. 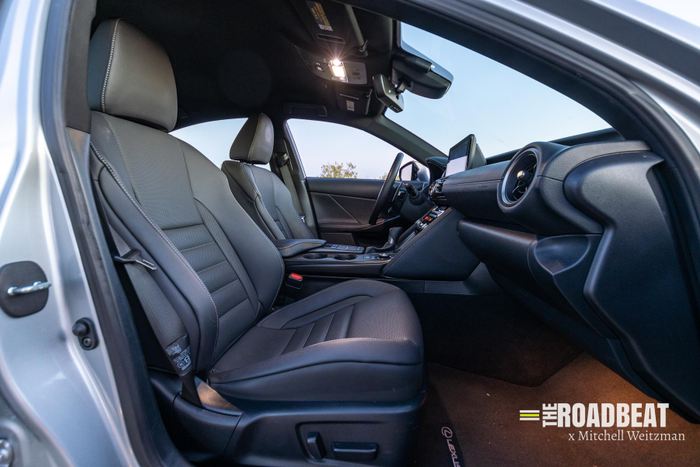 The interior is a typical Lexus masterclass of quality and craftsmanship.

The interior is a typical Lexus masterclass of quality and craftsmanship, being built to seemingly withstand a tsunami. The leather is beautiful and lush to the touch, the steering wheel feels excellent in the hands, and the seats do their part, too. It's quiet on the freeway, as a luxury car should be, and it's comfortable to boot. I enjoyed the softer-tuned suspension here because of how livable it is over a variety of surfaces, shrugging off bumps instead of bouncing occupants from their seats. And when you up the pace, it makes the IS 500 enjoyable in the sense that you can really lean on the chassis and get a sense of what the car is doing beneath and around you. The balance is good, too, lending itself to this state of trust from its natural progressions and movements. It's less capable and slower from A-B than other machines, but it's arguably more fun as a result by being able to extract more from it and gets you closer to that edge of reason and adhesion. It's also quite fun when you swing the behind around in a galloping fury of noise. 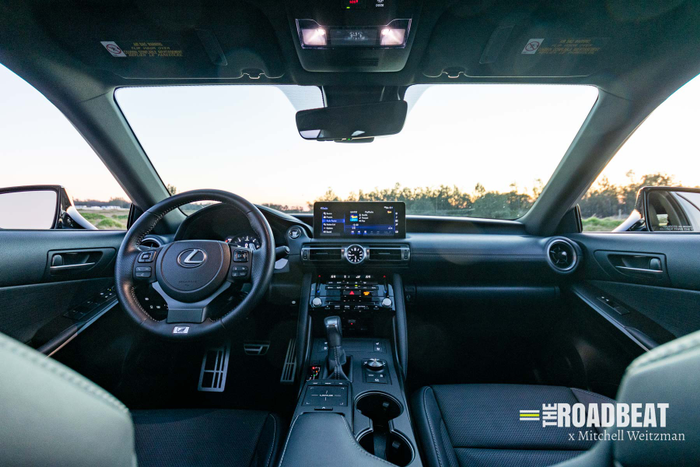 The leather is beautiful and lush to the touch, the steering wheel feels excellent in the hands, and the seats do their part, too.

While it is a great joy behind the wheel, those looking for the last word in absolute pace and ability might be better suited elsewhere, like one of those BMW M340is. However, do you really want a boring BMW? The Genesis G70 Sport has a more entertaining and better-balanced chassis, but the turbo V6 there lacks emotion. You could plop more and just go for a BMW M3 or the sublime Alfa Romeo Giulia Quadrifoglio, but the IS 500 represents huge value for what you get with an as-tested price estimated to be only $62,575 (plus figure $1,000 for destination), only marginally more pricey than a IS 350 F Sport.

Like other current Lexus models, there is that travesty of an infotainment system festered in the dash with a virus-infected touchpad interface. At least it's now a touchscreen to make it somewhat more tolerable, but it is greatly due for a complete redesign. It's 2022, ya'll, technology is supposed to make things easier.

Lexus is also in need of an update to its long-serving eight-speed automatic transmission. Controlling via paddles reveals lag between your inputs and the trans actually changing gear, and it can be clunky at low speeds or not respond at all. It works best when at full boil, but it lacks the precision of dual-clutches or even BMW's ZF eight-speed auto, let alone Lexus' own and fantastic 10-speed auto that is mated to the back of the LC 500's engine. That's the gearbox this car wants. 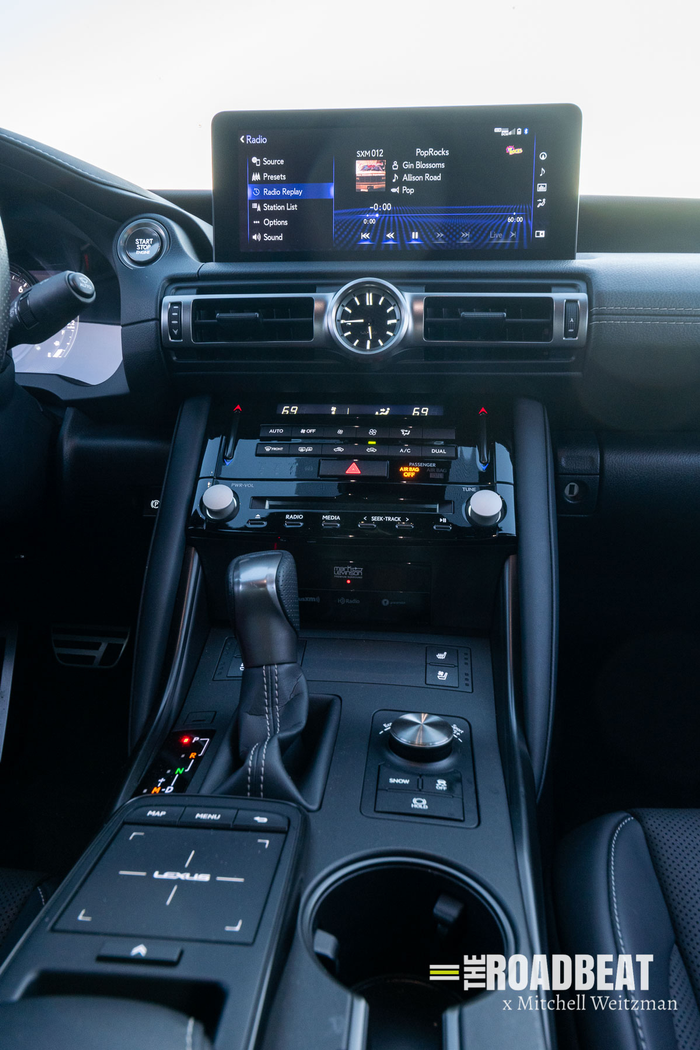 There is that travesty of an infotainment system festered in the dash with a virus-infected touchpad interface.

Now, remember, this is only an F Sport car, so that does mean certain items were skimped on to keep costs down. The brakes for example, are not the beefy clampers you'd find on an RC F, and as such, they're less suited for track duty (14.9" calipers on an RC F verse 14" on the IS 500). On the road they're fine, but other publications who have pushed the IS 500 on tracks have complained about the brakes turning to mush rather quickly. The rear axle is not quite as sophisticated either, lacking the fancy torque vectoring differential of an RC F and instead relies solely on a Torsen Limited Slip, but I didn't notice any real discernible differences when it came to traction. However, even though the IS 500 and its suspension tuning is brilliant on the road, it would come across as too soft on the race track.

But, my biggest issue with the IS 500 comes from censorship. That is, censoring your use of the traction control systems. This is a car with a sporting mission, right? Then why the actual heck can I not disable the electronic nannies at any speed other than literally zero? Yes, if you want to turn off traction and stability control, you have to be at naught-dead-stopped. You can, however, click the same button at speeds below 30 MPH, but—and this is a huge but—it only partially loosens the reins, and once you exceed 30, all the safety nets just turn back on automatically. I thought this was supposed to be a fun car! And mind you, I tried multiple times, holding the switch down below and above 30 MPH and there was no change or overcoming this oppression; You have to be completely stationary to have any fun. 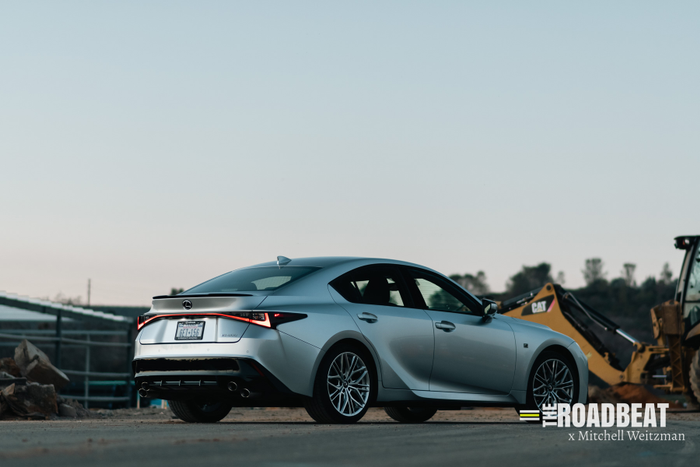 Yes, if you want to turn off traction and stability control, you have to be at naught-dead-stopped.

This decision is so maddening that either it's complete oversight (like the design team simply forgot), or they actually don't care for the driver. Imagine taking the IS 500 to a track day and forgetting to turn off the traction control. You'd have to come back into the pits and stop, most embarrassingly, and then rejoin. And trust me, you'd want them off, as left their to own devices, Big Brother is harsh in his restrictions, cutting the throttle abruptly and using the brakes to 'keep you in check' from my own experiences when trying to get frisky. In one scenario, it pulled power and grabbed the inside brake so aggressively to prevent a slide that it actually made it far more dangerous than if it did nothing at all. Keen drivers will surely be annoyed by these decisions.

This is a wonderful car blighted by oversight and surveillance. The engine is a love-letter to V8 hot rods of yesteryear, and one that will likely be replaced by a V6 twin-turbo sooner than you think. It offers real character and a classy, gentlemanly cabin to pair with the charming motor. Oh, did I mention it looks fantastic? But what I really want is a genuine IS F still, not as a replacement for this, but as an additional model—something a little harder and aggressive, and with electronics that work for you and not against you. Though, the latter should be applied to this and every other Lexus anyhow. If you want to make a driver's car, give the driver a choice—their choice to do drifts or pitch it into a ditch: Free will, man. Besides that, I could learn to remember to disable the authoritarian detainment and revel in the IS 500's greatness instead.

Verdict: Here's your chance to have a V8 hot rod before they go away forever Yes, if you want to turn off traction and stability control, you have to be at naught-dead-stopped. The interior is a typical Lexus masterclass of quality and craftsmanship. The leather is beautiful and lush to the touch, the steering wheel feels excellent in the hands, and the seats do their part, too. To start with, despite the girthy and grunty motor and the barbaric sounds it emits, this isn't actually that fast of a car. There is that travesty of an infotainment system festered in the dash with a virus-infected touchpad interface. 2:00pm · The Field at Lakeside Commons
View All Add Your Event