Spring Forth: 4 Seasonal Sports To Try Spring is nature’s way of telling us to get outside. So, why not head outdoors and try a new sport this season? No matter the activity, sports have a variety of health benefits—from better sleep, improving cardiovascular health, and burning calories to building endurance, improving balance and coordination, reducing stress, and improving mental health—according to Sandra T. Montgomery, CPRE, Recreation Superintendent at El Dorado Hills Community Services District.

Read on to get the play-by-play of where to enjoy a game of pickleball, softball, and more!

One of the fastest growing court sports in America, pickleball is a cross between tennis, badminton, and table tennis. The game helps to improve reflexes and balance, and is played on a court that’s 44 feet long and 20 feet wide. With rules similar to tennis, it’s also easy to learn for players of all ages and levels of play.
Over in El Dorado Hills, the Community Services District (eldoradohillscsd.org) offers a variety of pickleball opportunities in the form of indoor lessons and drop-ins at the CSD Gymnasium, says Montgomery. 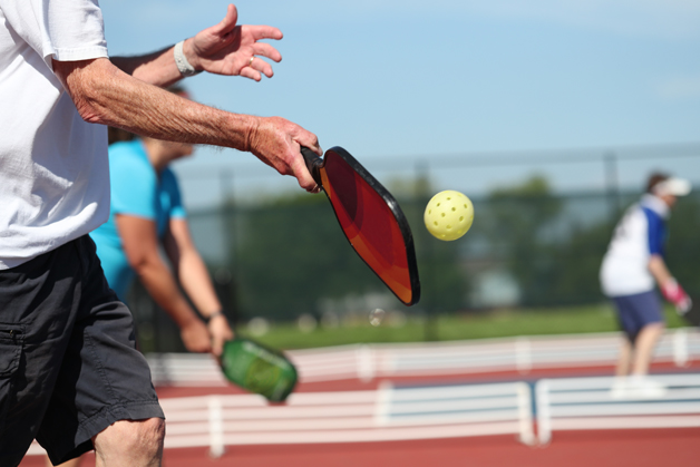 To meet the growing demand and interest in the sport, Spare Time Sports Clubs (sparetimesportsclubs.com) recently expanded its pickleball facilities and programming in the Sacramento region.
The centerpiece of this expansion has been the construction of a 24-court pickleball facility at Johnson Ranch Sports Club in Roseville, according to Mark Tappan, Spare Time’s Corporate Director of Operations. Johnson Ranch converted seven tennis courts to 24 lighted pickleball courts. The construction started earlier this year and is open to the public for play this spring.
The size and scope of the new facility will allow for major regional and national tournaments to host competitions in Roseville. Tappan said they also plan to develop a youth pickleball program to go along with the adult program as well as interclub leagues to promote level-specific competitive play. In addition, Spare Time will expand the pickleball program to 6-10 courts at a number of its other local clubs in Sacramento, Elk Grove, and Folsom.

Many things have been said about the game of golf. Shawn Kelly, a golf professional at The Ridge Golf Course & Events Center in Auburn (ridgegc.com), says it’s the best sport to play for a lifetime. “You [get to be] outdoors in some of the most beautiful places on earth,” he says. “You can share rounds with family and friends or make new friends. Golf is available to everyone, from the most athletic to those who are physically challenged. The sport can be the most frustrating or exhilarating—a variety of emotions all in the same day.”
Ken Morton, Jr. is the vice president of retail and marketing at Morton Golf Management, LLC, which oversees Haggin Oaks Golf Complex, Bing Maloney Golf Course, Bartley Cavanaugh Golf Course, and William Land Golf Course. He says the Greater Sacramento region has some of the very best public courses available anywhere in the country. “There’s great diversity in layouts, great values in pricing, and a large number of courses nearby,” he says. The Ridge offers golf lessons for everyone including beginners to the most experienced players. Haggin Oaks’ Northern California Institute of Golf (hagginoaks.com) has dozens of different lesson programs for all-level golfers. “We host PGA and First Tee junior golf programming, have women’s golf ambassadors running women-centric leagues, and do more adult class lesson programming than any other facility in the United States,” says Morton.
As an outdoor sport, you’ll get to enjoy the weather and get exercise as you move about the green. “Most golfers can walk miles during a round,” says Kelly. “The motion of golf uses many muscles in the body, including your mind while strategizing and focusing on the course and swing.” Morton says walking 18 holes is the equivalent of walking four to six miles and it is the ultimate socially distanced sport. “Golf is great for mental health. It gets you Vitamin D from the sun, reduces anxiety, can be great for blood pressure, gets you to exercise, builds friendships, enhances brain stimulation, and improves balance,” he says.

If you’re looking for a team sport, check out adult softball in El Dorado Hills. The CSD offers adult softball leagues in spring, summer, and fall, and each team will have a roster of 15-16 players.
Montgomery says men’s games are played on Tuesday or Thursday evenings, and co-ed games are played on Wednesday evenings at Promontory Community Park. You can register as a team and championship T-shirts are provided by the CSD for the winning team. Bocce, also known as Italian lawn bowling, is one of the most widely played games in the world and is one of the oldest lawn or yard games. 8:30am · Fountains at Roseville
View All Add Your Event