The leaves are changing colors, the air is turning crisp, and it’s time to pull out the scarves and boots. But sweater weather aside, it’s also the most flavorful time of year! Pumpkin, apple, ginger, and chai, oh my! We’ve been patiently waiting for the season’s signature eats and drinks to return, counting down the days until we could hold a warm cup of pumpkin-something in our shivering hands. It’s finally go-time! Open those hard ciders, pull up your lederhosen, and check out these local restaurants for a taste of fall.
Experience a unique and interactive night out with a fall-inspired, reasonably priced ($49 per person) prix fixe meal at Fourk Kitchen.
TRY THIS:  This month’s Seasonal Four-Course Dinner includes roasted yellow and red beet salad with red pepper purée and balsamic reduction, roasted butternut squash soup with toasted pepitas and sage oil, pappardelle short rib ragu, and spiced rum cake with toffee ice cream. Drooling yet? 825 Twelve Bridges Drive, Suite 65, Lincoln, 916-409-2101, fourkkitchen.com 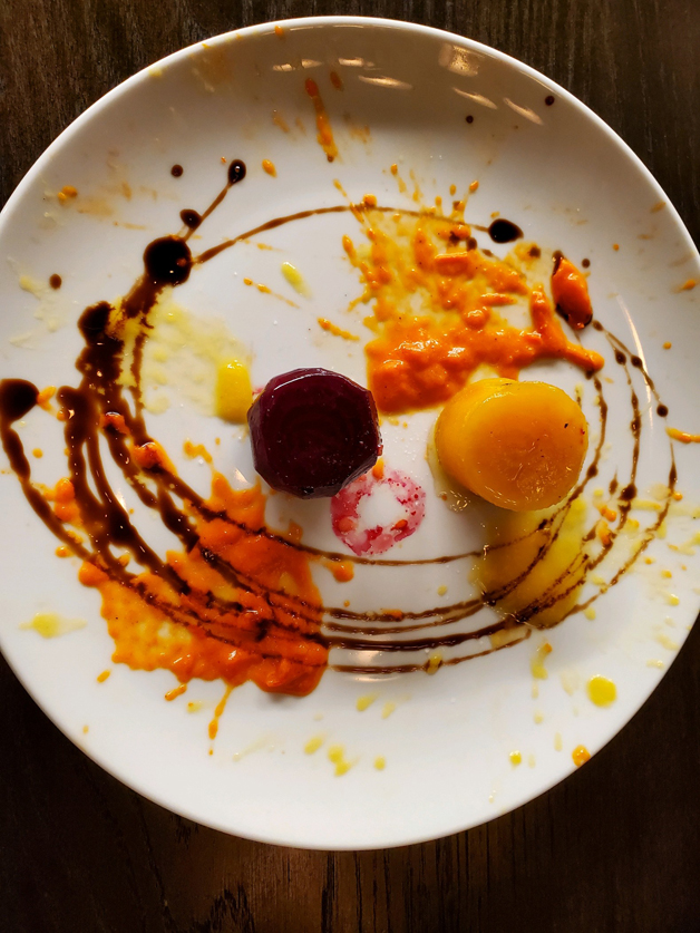 Modern-rustic environs set the scene at The Independent Restaurant and Bar—a beloved dining destination in Downtown Placerville. Patrons flock from near and far for a taste of the American fusion fare and lovingly made libations.
TRY THIS:  For an autumnal twist on a classic old fashioned, order the Bourbon & Spice. Pumpkin purée, black walnut bitters, and brown sugar-cinnamon syrup mingle with sweet bourbon and a dash of pumpkin spice to create the crowd-pleasing cocktail. 629 Main Street, Suite 102, Placerville, 530-344-7645, independentplacerville.com 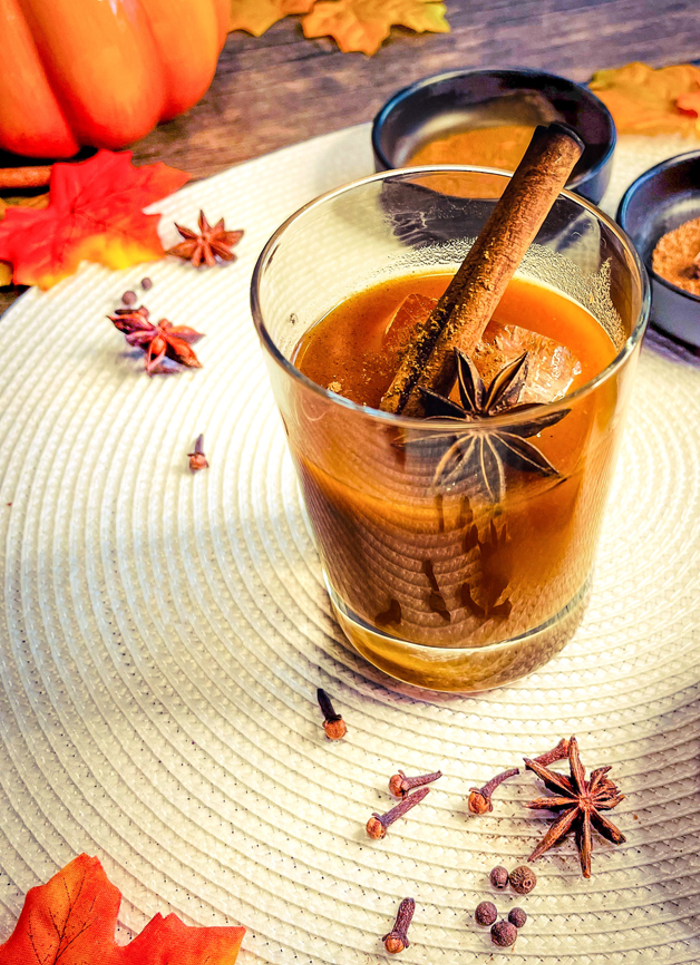 The Independent Restaurant and Bar

Known for their craft beers and extensive menu, Auburn Alehouse is sited in one of Old Town Auburn’s most historically significant structures.
TRY THIS:  You’ll feel like you’re in Germany sipping on the amber-hued Oktoberfest Märzen that has matured for over 30 days. The lager has a delicate malt and hop flavor and pairs perfectly with their soft pretzel and beer cheese. Prost! 289 Washington Street, Auburn, 530-885-2537, auburnalehouse.com 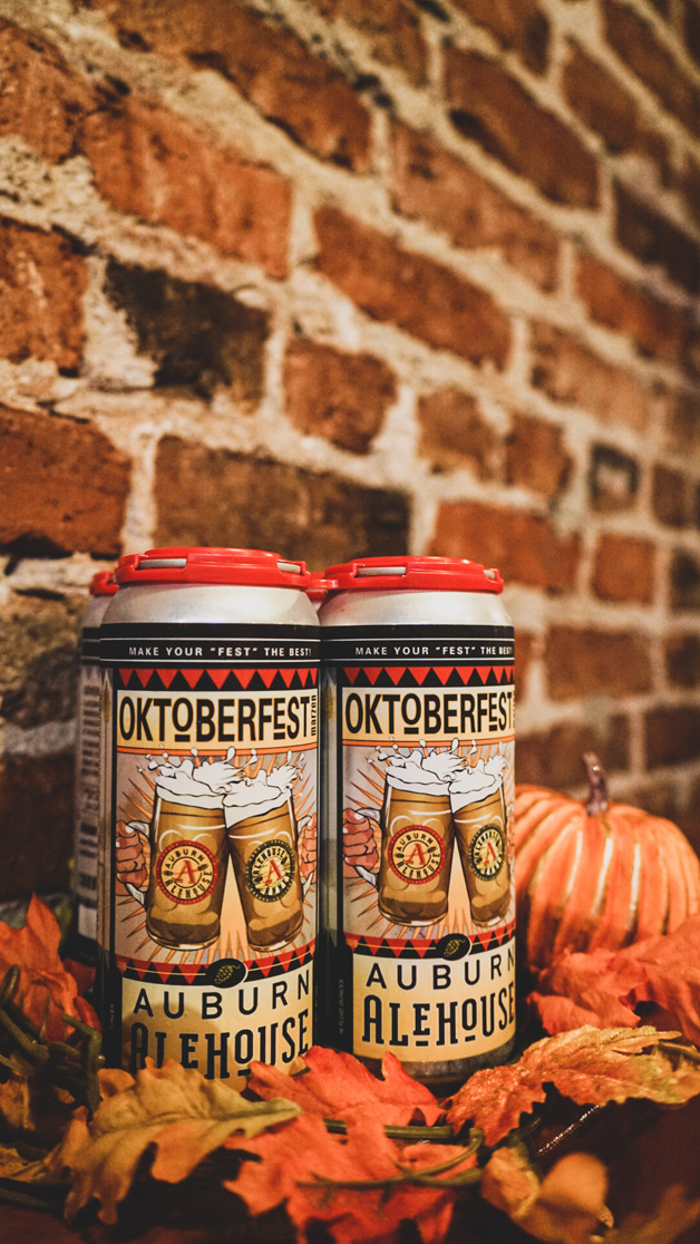 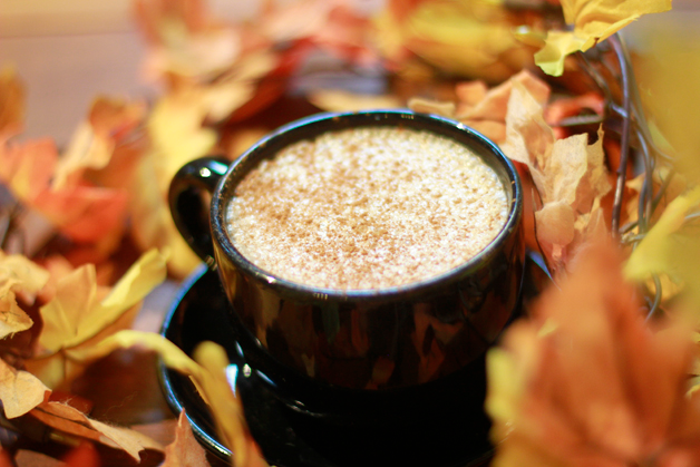 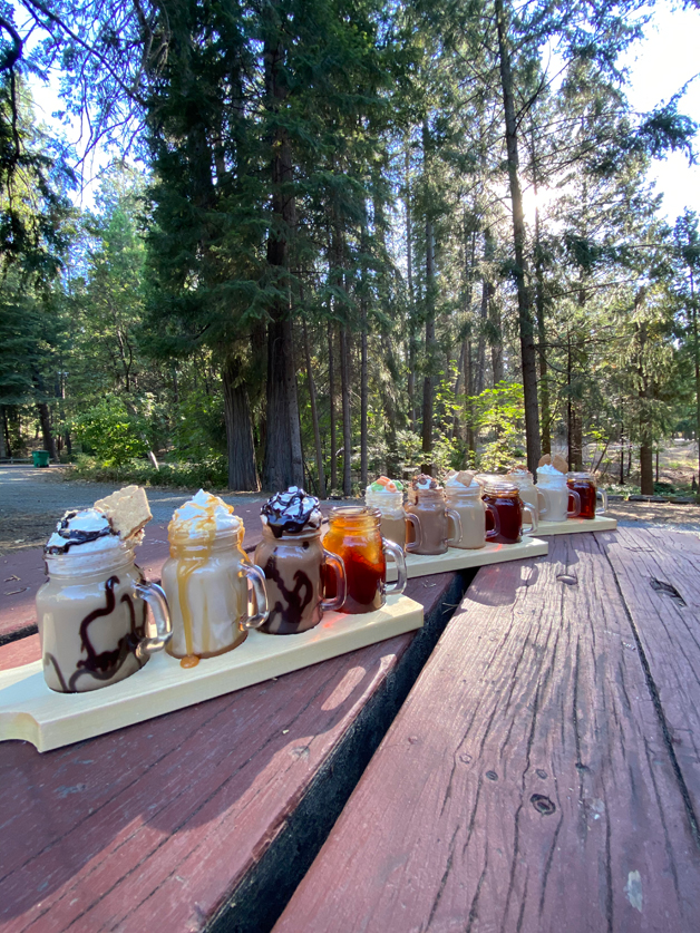 Totem Coffee Co. is in the heart of Downtown Placerville and boasts brews of all sorts: ethically sourced coffee and local craft beers to be exact. Add to that a seasonal menu with plenty of vegan and gluten-free baked goods, and you’ll see why this is a Main Street mainstay.
TRY THIS:  Their popular Pumpkin Latte starts with house-made pumpkin syrup that’s only available during the fall. Made with locally grown organic pumpkins that are roasted with spices like cinnamon and nutmeg, it’s then puréed and cooked down. The result? A syrup you’ll want to add to anything and everything. 312 Main Street, Suite 104, Placerville, 530-903-3280, totemcoffeeroasters.com 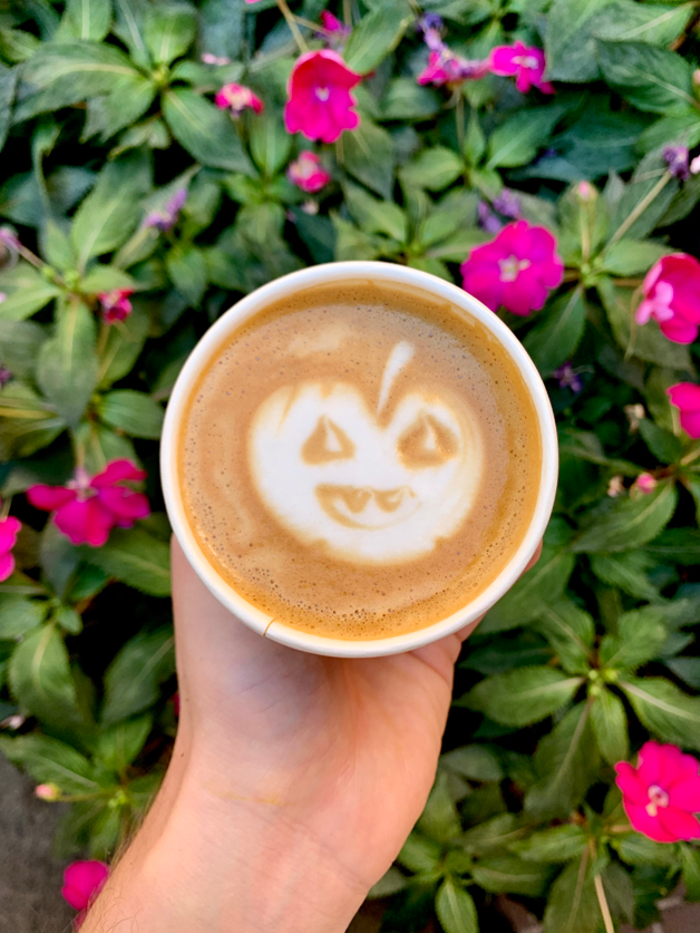 Bagel & Bean serves fun bagel flavors like Hot Cheetos, Fruity Pebbles, Oreo, and French Toast Crunch. If you’re more of a plain Jane when it comes to the chewy, carb-loaded delights, fret not: All the classics are available, too, and they’re all baked fresh daily.
TRY THIS:  Pumpkin Bagels and/or Halloween Swirl Bagels! Spread some of their homemade cream cheese on top and toast to crisp autumn mornings in the best, most delicious, way possible. 845 Twelve Bridges Drive, Suite 140, Lincoln, 916-209-3995, bagelandbean.com 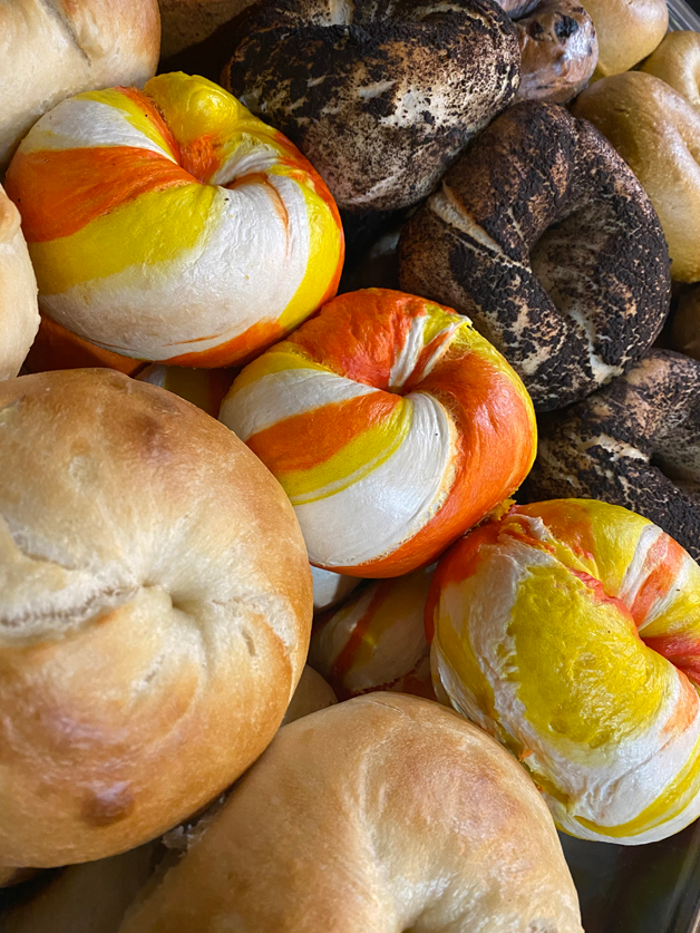 Why did Bricks Eats & Drinks name their restaurant “Bricks”? Because their building is constructed mostly of… bricks. But beautiful building aside, they serve some of the most mouthwatering meals in town.
TRY THIS:  If you’re craving something seasonal but semi-healthy, try the Apple Chicken Salad that’s bursting with chicken, apples, cranberries, red onions, feta, candied walnuts (yum!), and an orange vinaigrette. Pair it with a Zombie Killer Apple Cherry Cider for the perfect fall meal. 482 Main Street, Placerville, 530-303-3480, bricksonmainstreet.com 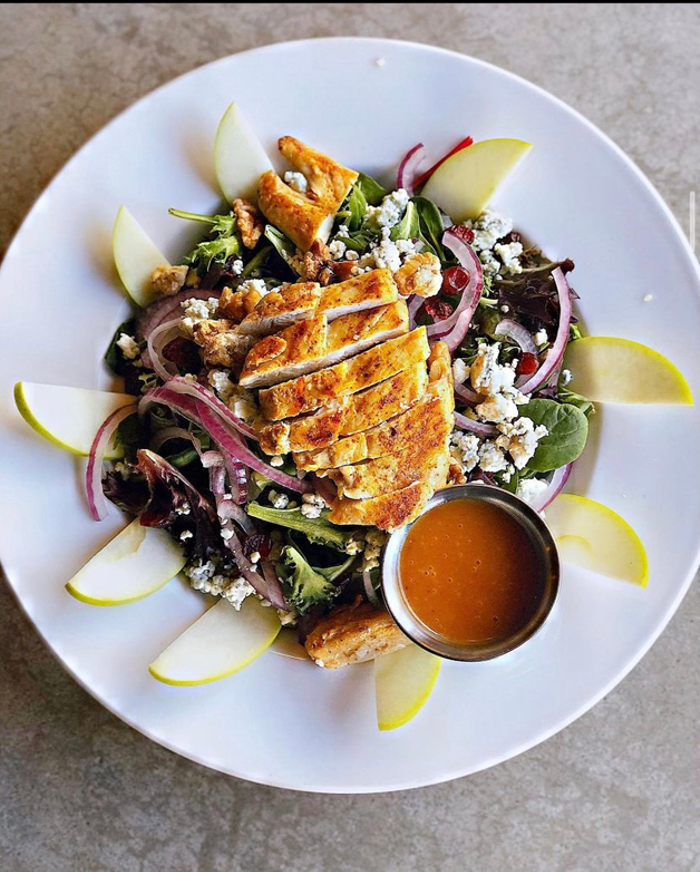 The owner of Kathrin’s Biergarten (not surprisingly named Kathrin) is from Germany, so you know anything you order will be authentic. Their entire menu screams Oktoberfest, which is particularly perfect this time of year. For anyone who loves schnitzel, bratwurst, fresh-baked Bavarian “bretzels” (pretzels), sausages, and German-style brews, it’s a dream come true.
TRY THIS:  The Apfelstrudel, served warm with ice cream or whipped cream, is full of diced red apples and cinnamon layered in a thin, flaky crust sprinkled with powdered sugar. Not too sweet and a little tart, this traditional German dessert is akin to apple pie but umpteen times better. 4810 Granite Drive, Suite 1A, Rocklin, 916-251-7502, kathrinsbiergarten.com 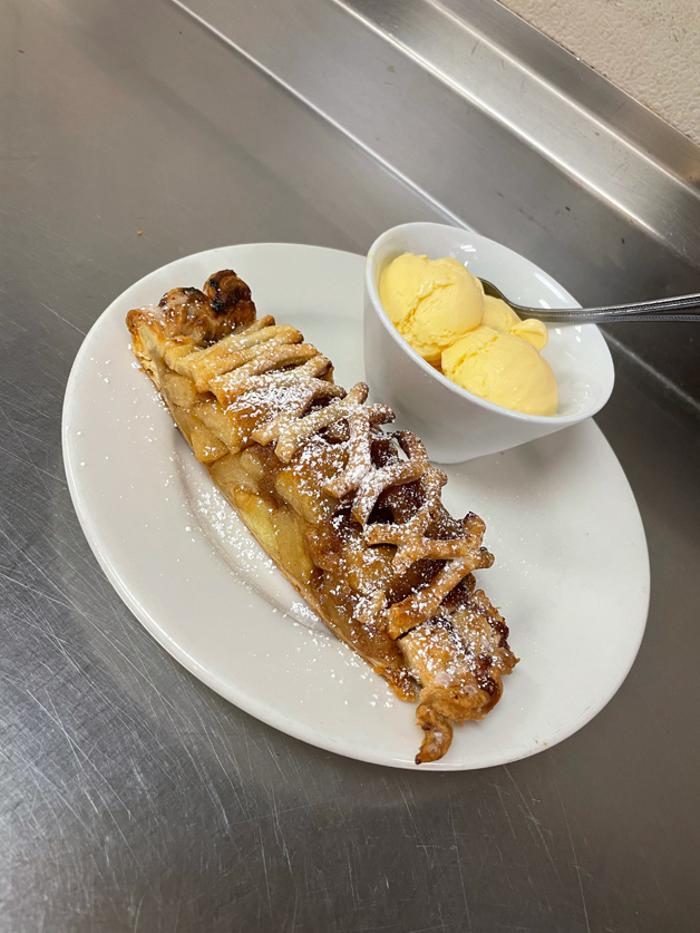 After years of dreaming about it, Julian of Folsom’s beloved Julian’s Pâtisserie and Café moved back home and opened his own pastry shop. Stop in and savor the endless amounts of pastries, crêpes, and other sweet (or savory) treats.
TRY THIS:  Fresh green apples, brown sugar, cinnamon, caramel sauce, and whipped cream make up the perfect Caramel Apple Crêpe. Talk about a breakfast of champions! 6610 Folsom-Auburn Road, Suite 7, Folsom, 916-936-4735, julianscafe.com 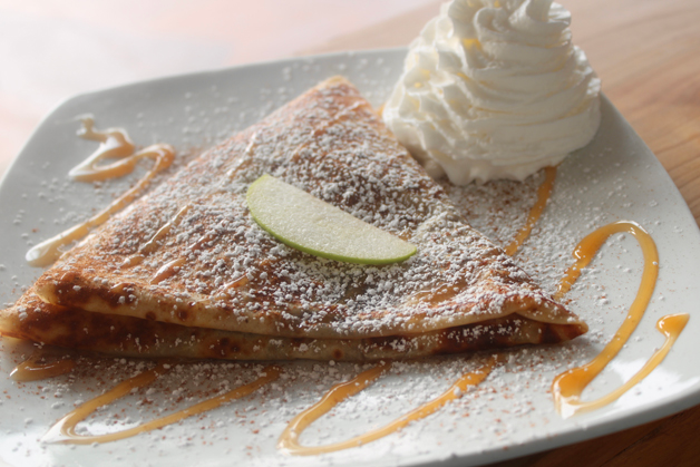 Selland’s Market-Café has several restaurants in the Sacramento area, and they’ve been serving tasty farm-to-fork meals for over 25 years.
TRY THIS:  Their seasonal Pumpkin & Ginger Soup with toasted pepitas is bursting with fall flavors and makes a perfect midday meal or light dinner. Don’t forget to end on a sweet note with one of their amazing house-made desserts. Good luck choosing just one! 4370 Town Center Boulevard, Suite 120, El Dorado Hills, 916-932-5025; 5340 H Street, Sacramento, 916-736-3333; 915 Broadway, Sacramento, 916-732-3390, sellands.com Family owned and operated, Wise Villa Winery offers award-winning vino and a Tuscan-style bistro with unforgettable food and beautiful views to boot.
TRY THIS:  What happens when fall and comfort food collide? Wise Villa’s Roasted Butternut Squash Ravioli in sage brown butter sauce. This is a seasonal dish, so get it while it’s hot! 4200 Wise Road, Lincoln, 916-543-0323, wisevillawinery.com 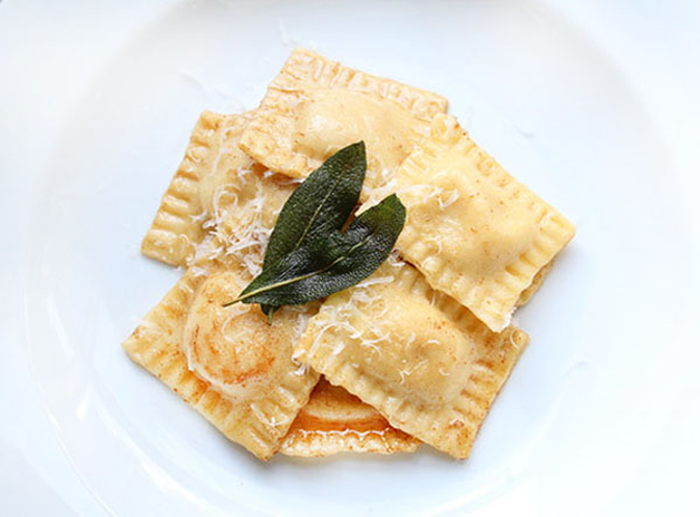