Next month, from November 12-14, you’re invited to support and celebrate local creatives at the 28th annual Placer Artists Studios Tour—an annual event that this year will showcase 112 artists in over 60 locations, with eight galleries in Placer County split into eight regions.

From 10 a.m.-5 p.m. each day, you’ll be warmly welcomed into participating artists’ studios for a peek at their creative process. There will also be a preview show, Taste of the Tour, from October 29-November 14, along with a Taste of the Tour Reception on October 30 from 5-8 p.m. Both events are hosted at Roseville’s Blue Line Arts and are free to the public. 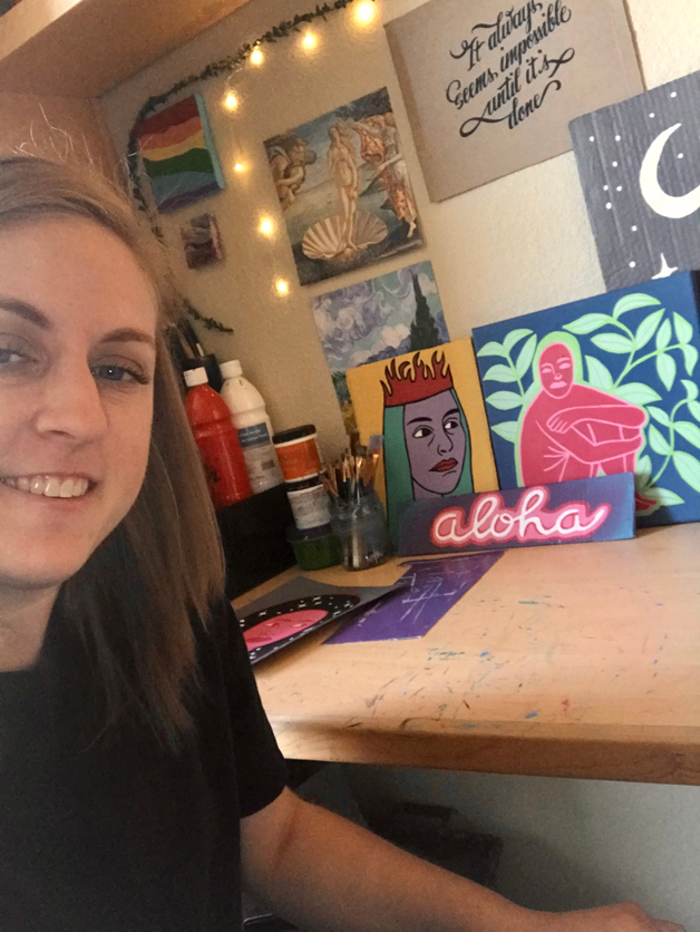 New this year is artist Rachel Christofferson (rachelchristofferson.com), who will be showing her paintings at Art League of Lincoln. Her attraction to painting began at a young age, which developed further as she took art classes in high school. She went on to study studio art and obtained her bachelor’s degree in art history. Christofferson’s process usually depends on her mood and says painting has always been therapeutic, granting her the space to be creative and imaginative. Despite dabbling with different kinds of paint, she often finds herself returning to acrylic. “I like how quickly the paint dries, which helps me work on many different pieces at once...[plus there is] less hassle for me to quickly setup, cleanup, and paint,” says Christofferson. Her inspiration comes from myriad sources—movies, books, history, real life, and animation. When asked what her most notable achievement to date is, she says her participation in this tour. “As someone who struggles with social anxiety, being a part of an event like this is both a personal victory and a notable accomplishment in my art journey.” 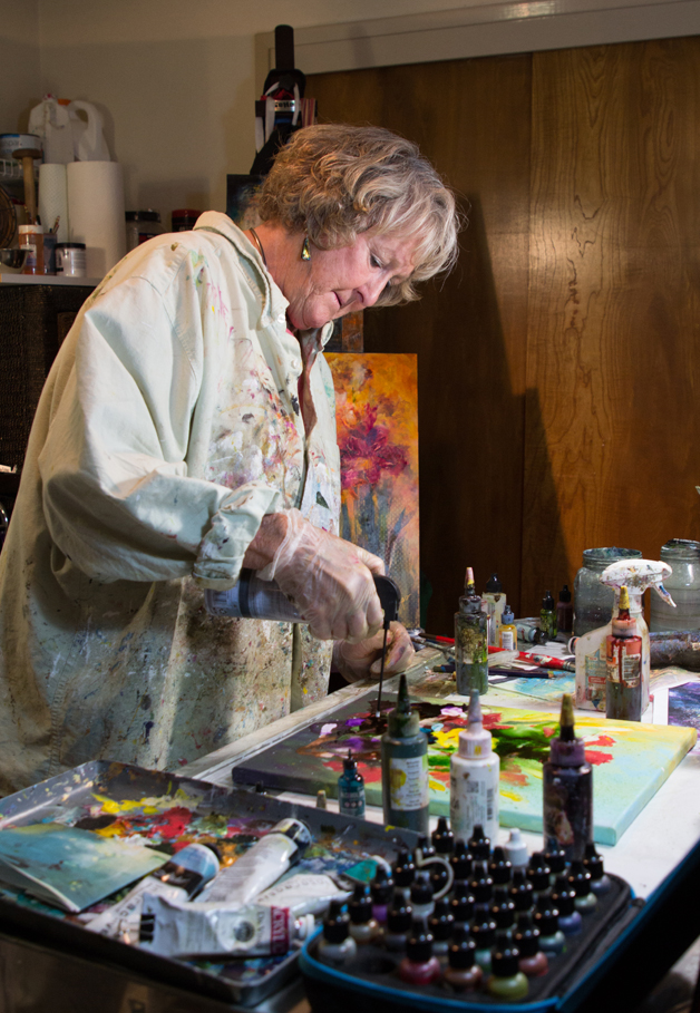 Next on tour is Gini Crepps (ginicreppsart.com), whose abstract piece, Moonlit Dreams, was chosen to be the front image of this year’s tour. Crepps has been painting for 15 years, developing her skills over time through mentors, workshops, and classes. She enjoys mixed media because the colors and textures give her the freedom to play and experiment, whether it be acrylic, alcohol ink, or gels. She begins with a tidy studio, which irrevocably ends up looking as though “a tornado went through it” shortly into the process. For Crepps, every painting differs yet combines varying media. “I never really know the final direction a particular painting will take,” she says, “but that’s what I love about the media—I’m never ‘stuck’ because it is always changeable.” Crepps likes to look at photos for inspiration, seeing what subjects make for interesting compositions using light and color. However, the true challenge is knowing what sells, versus what she wants to paint and knowing when to balance the two. Alongside many accomplishments, she says that her most notable achievement is when people see her work and “connect and love what they see...and respond on an emotional level.” 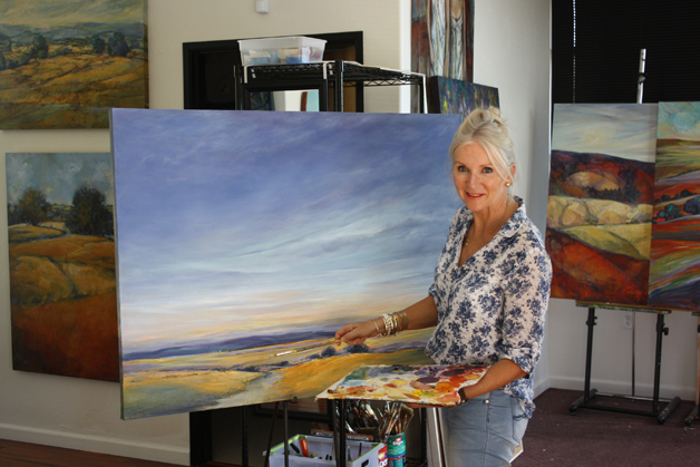 Also participating is Mya Louw (myalouw.com), classically trained in oil painting with a degree in fine arts from Rhodes University in South Africa. Louw’s process depends on her choice of medium; for oil paintings, she starts with sketching, then layering the canvas with thin oil paints, building from lights to darks, and continuing with thicker paint near the end. As for acrylic paint, she says, “you can do anything and everything, as there are no strict rules.” Many of Louw’s commissions and larger works are usually acrylic because it’s easier to clean up and complete in a shorter amount of time. Much of Louw’s inspiration comes from Northern California—particularly the rolling hills and vast spaces. As a challenge to herself, Louw depicts what she sees by pushing for happy and vibrant colors like yellows, oranges, and bright blues—and creates while listening to uplifting music. Her most notable achievement thus far would be the absolute privilege of being able to get up every day, paint, and continue to master her craft. 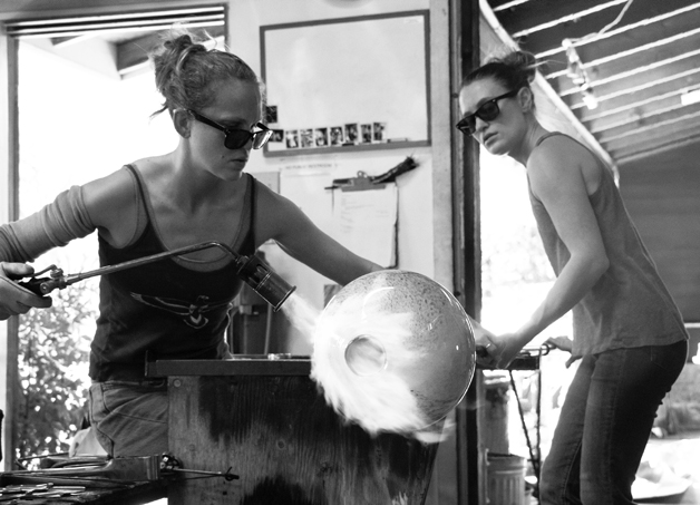 Part of this year’s “Passing it Forward” story is father-daughter duo Paul and Alana van Altena (nicholsonvanaltenaglass.com). Alana will be showcasing her blown glass, while her father will display his wood slab art in the same Auburn studio. Alana developed her skills by working nearly five years for her partner’s parents, the Nicholsons, while her father used his previous experience as a contractor to build on his skills. Alana’s process usually begins with clear molten glass on one end of a pipe, adding layers of color in between layers of clear. If creating a blown glass piece, Alana and her partner, Hannah Nicholson, gather the mass onto a six-foot pipe and begin to slowly inflate it, whereas a sculptural piece requires hand tools to manipulate the glass. “[It’s cool] working with a medium in a state that most people don’t get to see,” Alana says when asked what attracts her to glass blowing. Meanwhile, Paul starts with a log or rough-cut slab that needs to be surfaced, straightened, and sanded. For Paul, the process isn’t linear, and he often finds that the results aren’t what was expected, which is what makes the medium enjoyable. He’s inspired by nature, much like his daughter, and is always on the lookout for cool pieces of wood. Now retired, he’s able to spend more time on his craft and is excited to explore more of his creative side.
FOR MORE INFO ON THE TOUR AND AN INTERACTIVE, DOWNLOADABLE MAP, VISIT PLACERARTISTSTOUR.ORG.
by Bella Nolen
In-Print, Arts ARTS AND ENTERTAINMENT October 2021