Dads. They’re slayers of dragons, fixers of things, teachers of lessons, and tellers of really bad jokes. As we celebrate Father’s Day this month (June 20), we’re grateful for the wit, wisdom, and wonder they bring to our lives. 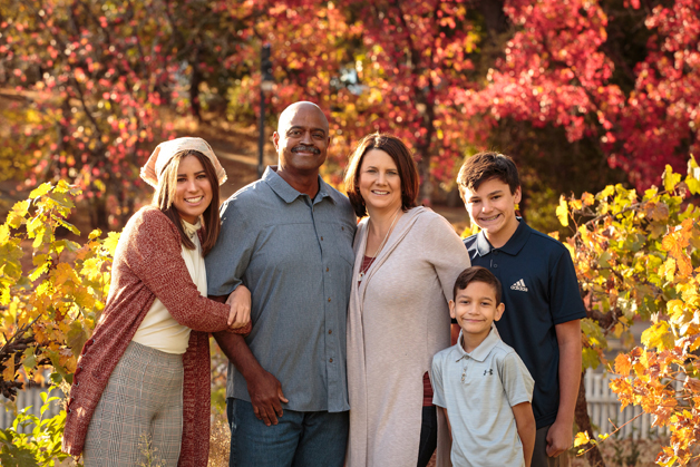 Rick has shined in his 40-year career in the fire service. “Being in a position to help others never gets old,” he says. Although this genteel man is the current fire chief of Roseville, to his six kids, he’s simply “dad.”
His son Kevin (39) is also a fire captain who shares many traits with his dad; Sarah (34) is patient, soft-spoken, and works for a water distribution company; and Kristin (32) is introverted, expressive, and works in retail.
Rick and his wife, Jennifer, became certified foster parents in 2005, welcoming siblings Milo and Tatianna whom they later adopted. A few years after, a fellow firefighter looking for foster care for a relative, brought Boston into their lives. He was adopted thereafter and the three are now thriving. Tatiana (17) is independent and loves the arts; Milo (14) is outgoing and responsible; and Boston (10) is spirited and the most competitive of the six!
Describe your foray into fatherhood.
With all the children, I cherish the times when they were little. However, the times we went before a judge and were awarded the adoption of the three younger children are especially great memories. The years we spent fostering them while supporting the birth parents were grueling emotionally, mentally, and physically—yet rewarding.
What’s your parenting style?
My father was ex-military, which led him to parent in a very authoritarian manner. I, on the other hand, try hard to connect with my children so I can guide them, praise them, and meet their needs. Being firm but warm, I hold high expectations but reward equally.
How has fatherhood changed you?
I quickly learned I’m not perfect. It has helped me to continuously take stock of what I’m doing, change what I can, and accept what I can’t control.
What life lessons do you hope to impart to your children?
There will always be peaks and valleys in life—like a roller coaster! Cherish the good times and learn from your mistakes. 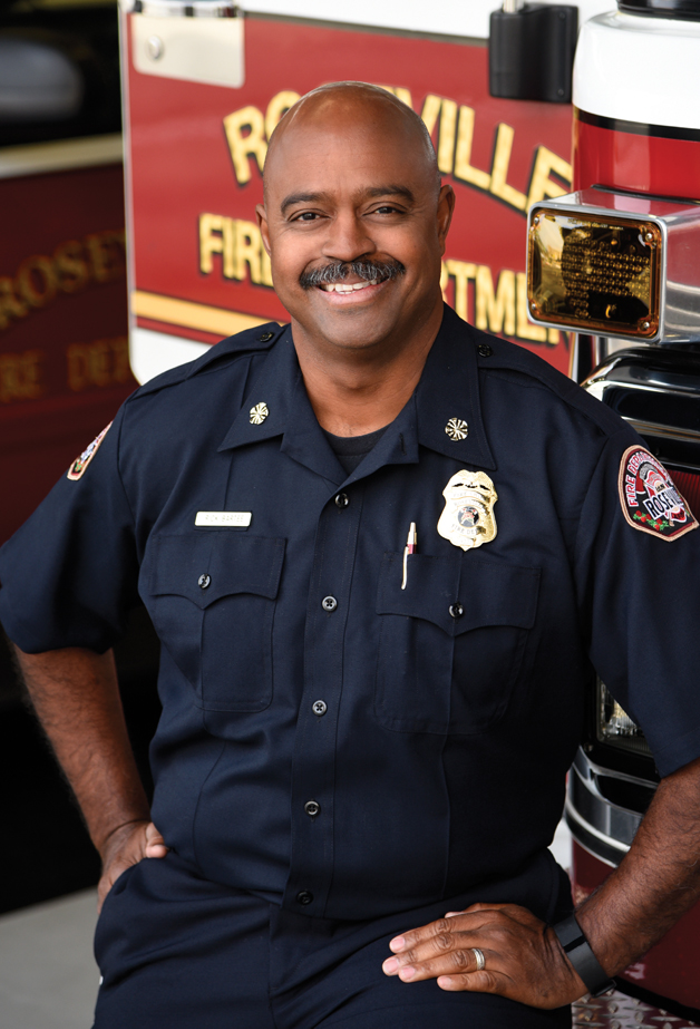 Best part about being a dad: I’m most thankful for my wife. She is strong when I feel like falling apart. I can’t imagine doing this without her.
Favorite activity to do with the kids: Being outdoors, whether walking/hiking or at a park.
Your ultimate dad superpower: The “death glare”—they can tell by the look in my eyes that I’m being serious.
Best dad advice: There are many times where the kids are right!
When the going gets tough…Pause, close your eyes, breathe, and focus on the task. The solution will come to you. 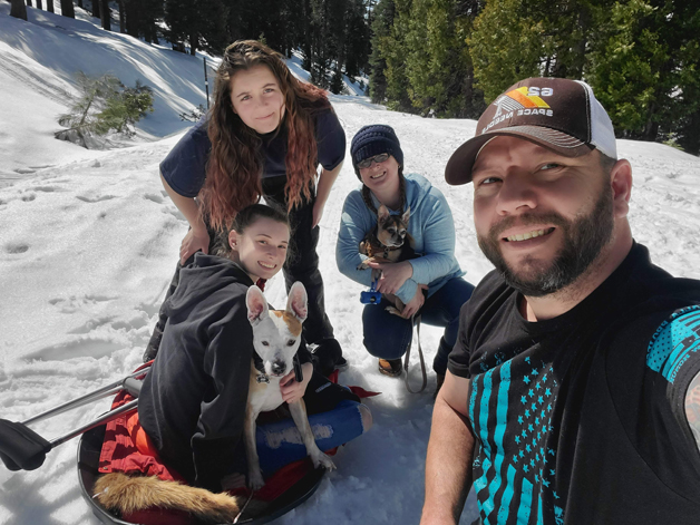 A self-described nerd, Chris loves Batman and Legos. In a past life, he was an event photographer, snapping pictures for Disney, Nike, and Kim Kardashian in Las Vegas. He became a contractor in California and is now a head technician. Chris has also done notable work for KidsFirst (kidsfirstnow.org)—a counseling and family resource center— assisting with their Forever Fathers program and even received a certificate from Assemblyman Kevin Kiley for his efforts. He adores his girls, too: Scarlette (14), his energetic biological daughter, who is a Friends fan and loves cracking jokes; and Kailei (15), his partner's daughter who considers Chris her dad and is strong, independent, and a drama enthusiast.
Describe your foray into fatherhood.
When Scarlette was young, I was told I couldn’t see her anymore. I wasn’t in a place to afford legal action so, unfortunately, we had no relationship for a few years. Three years ago, I started a reunification process and was awarded full custody about a year ago. We now have a great relationship. Recently, teaching the girls how to drive or talking to them about relationships and watching them turn into women has been amazing to experience.
What’s your parenting style?
Firm but fair. With the kids it’s a fairly simple rule: If you try your best and are honest then we’ll be as relaxed as possible. We also have an open-door policy. If you did something just come tell us.
How has fatherhood changed you?
It taught me how to put others first. Having two girls taught me to look at things from a female perspective. I now try and be an example so when they’re in a relationship they understand what it’s like to be treated properly.
What life lessons do you hope to impart to your children?
If you’re with someone who has a child, treat them as if they’re your own. Be open to life. Love others no matter their finances, race, sexuality, or education. Follow through with what you say you’re going to do. 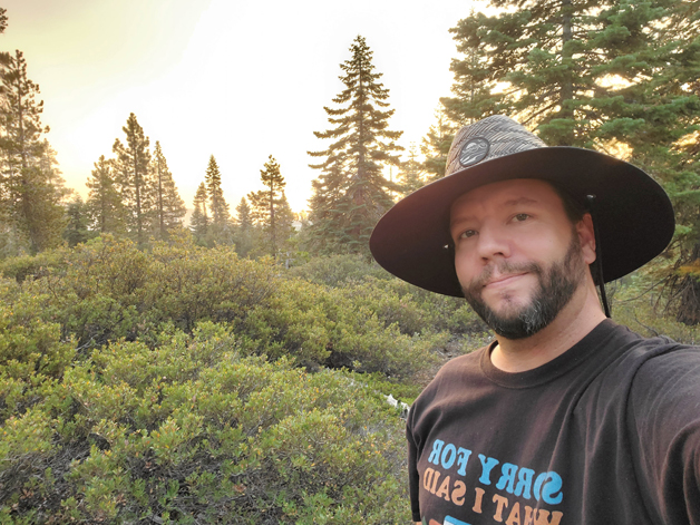 Best part about being a dad: Watching them grow and seeing what you’ve instilled in them as they navigate life and become their own person.
Favorite activity to do with the kids: Traveling/camping, watching ’80s and ’90s movies, and watching them laugh at things I remember laughing at.
Favorite dad joke: Them: "What’s for dinner?” Me: "FOOD.” Them: “What kind of food?" Me: "The edible kind.” Them: *eyeroll*
Your ultimate dad superpower: I’d love to say my utility belt, but Batman beat me to it, so I’d say my ability to be a dorky, fun dad and still be their protector.
Best dad advice: Listen to your children, listen to your partner, and always try and talk it out.
When the going gets tough…Loosen up and let your daughter paint your nails, put your hair in pigtails, and enjoy the moment. 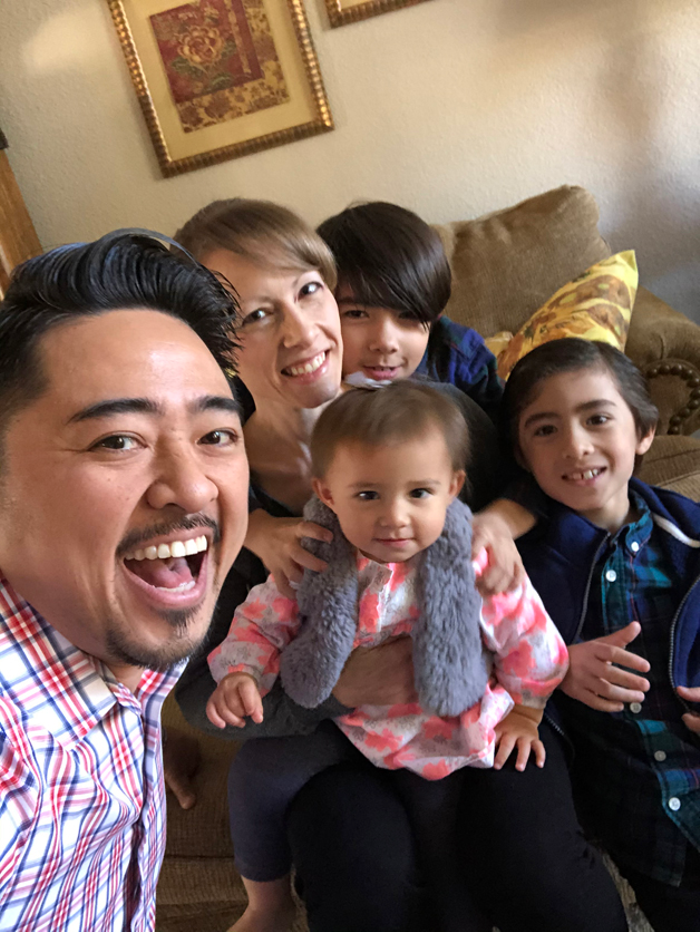 You’ve probably seen Adrian around Folsom. He’s the guy with the big smile and bounce in his step. You’ve also likely seen him at community events and festivities; present at Rotary Club and Lions Club fundraisers; and contributing his time to nonprofits like Folsom’s Hope, the Folsom Bulldogs, and Twin Lakes Food Bank. Adrian’s also an avid supporter of first responders and does a lot for them.
Amid his rigorous social schedule, Adrian also operates Folsom’s beloved Adrian Blanco Jewelry—for which he’s won numerous small business awards in an industry he’s been in for over 20 years. “I believe small businesses are the lifeline of our community and are what make Folsom so unique!” he says. Community service and entrepreneurship aside, Adrian is a proud papa to Lucas (10), Dillon (8), and Daisy (2). He spends time scouting and playing sports with the two adventurous boys and loves interacting with his little girl.
Describe your foray into fatherhood.
Having kids is something I've always looked forward to since I came from a huge family [but] I truly did not know the "love" my parents have for me until I became a parent myself. It's that indescribable, unconditional love!
What’s your parenting style?
I oscillate between being an authoritative and permissive dad. Setting rules are important but at the same time I believe in letting kids be kids.
How has fatherhood changed you?
My desire to love, protect, and provide is stronger than ever. I've realized that I'm able to feel certain emotions that I didn't know I was capable of feeling. It's amazing!
What life lessons do you hope to impart to your children?
Every parent wants the best for their children. I just want them to grow up happy knowing that they matter above anything else in this world. 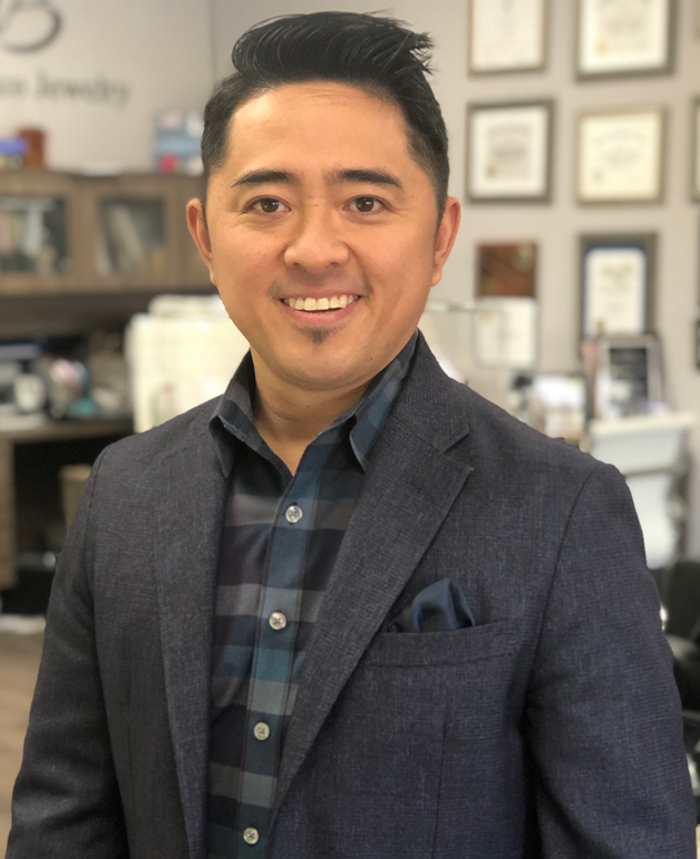 Best part about being a dad: Hanging out with my mini-mes!
Favorite activity to do with the kids: With my boys, playing Nintendo Switch; with my baby daughter, everything she does.
Favorite dad joke: “Why did the chicken cross the road” jokes.
Your ultimate superpower: I can fix anything!
Best dad advice: Always do your best, but most importantly have fun.
When the going gets tough…Just keep moving forward. 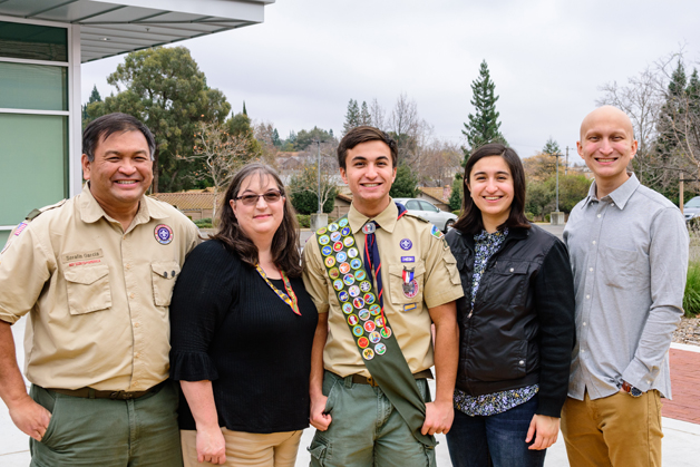 Serafin is a bit of a goofball with a penchant for…just about everything. The Intel engineering manager has 18 U.S. patents to his name and geeks out on computers, photography, “making things,” and music. The multi-talented musician has performed with prominent local band Azuar for over 10 years and is currently the music director at St. John the Baptist Catholic Church. Serafin was also a scoutmaster when his boys were young and now serves as a board member of its booster organization. His three children have excelled in life albeit “with very little handholding from us parents,” Serafin says. Christina (25) is a black belt in karate, has a master’s in applied physics from Harvard, and works for a research lab; Joey (22) is an Eagle Scout, rower, and natural leader who's currently studying computer science at MIT; and Nick (20) was also a scout and is at MIT where he sings with the Logarhythms.
Describe your foray into fatherhood.
Before we moved to Folsom in 1995, we were considering adoption since children just didn't seem to be forthcoming. There must be something in the water here since we ended up with three awesome kids. Before Joey’s college freshman year at MIT, we learned that he had a brain tumor. He subsequently took a gap year to receive treatment at St. Jude Hospital in Memphis. Dealing with his brain tumor was a real ordeal for the family, but it also brought out the best in us.
What’s your parenting style?
Laissez-faire. I try to raise my kids by example, ensure that they have options, and nudge them a bit while giving them space to make their own choices.
How has fatherhood changed you?
The responsibility certainly changed my priorities. I would probably be a bit more adventurous if I didn't have kids, but it's been a fun, extremely rewarding ride.
What life lessons do you hope to impart to your children?
Do the right thing; give back to the community; use your talents to make the world a better place; volunteer. 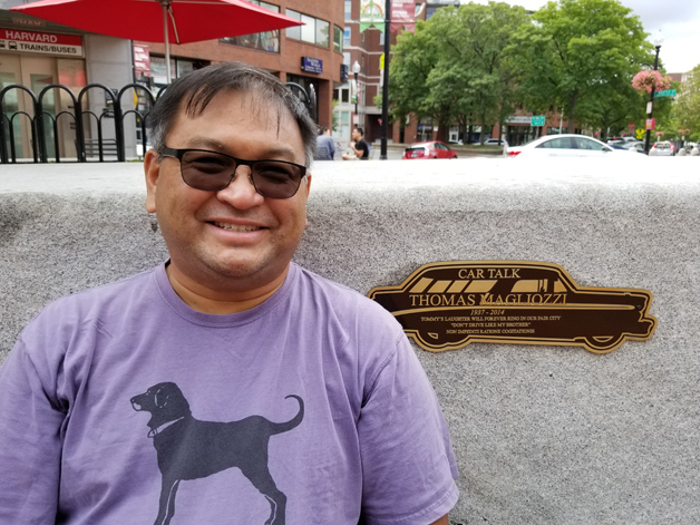 Best part about being a dad: Seeing my kids succeed in what they do and exercise "adulting."
Favorite activity to do with the kids: Camping.
Favorite dad joke: Any and every bad pun.
Your ultimate dad superpower: I instantly detect when something is out of place around the house—but especially in the garage.
Best dad advice: See the big picture; think long-term; think critically.
When the going gets tough…Take things one step at a time-and take a nap.
BY Tara Mendanha
Rick Bartee headshot photo by Dante Fontana. Rick Bartee family photo by Courtney Sheridan Photography. Other photo courtesy of their respective families.
Photos by Dante Fontana © and wholly owned by Style Media Group—please don’t steal our copyrighted photos. For more information about our editorial photos, please click here to contact us <<LINK TO https://www.stylemg.com/pages/contact-us