Earlier this year I had the pleasure of sampling the CX-9, Mazda's flagship three-row SUV. I found it to be beautifully made, beautiful to look at, and beautiful to drive. I wrote that it was better to drive than most cars, let alone SUVs. It should come as zero shock then that the little brother CX-5 is basically the exact same story from head to toe. And after recently spending time with the most expensive examples of Honda's CR-V and Toyota's RAV4, neither stand a chance in terms of opulence nor dynamics to this mighty Mazda. It's like facing Rafael Nadal at Roland-Garros; nobody comes close.

Approaching the CX-5, it looks exactly like a shrunken CX-9, especially in the same stirring Soul Red paint, which is no bad thing because of Mazda's trademark artisan curves and creases. Mazda has a stronghold on luxury-infused interiors on their modestly prices vehicles, and so as expected, the CX-5 Signature is endowed with an elegance using materials more fitting of upscale German contemporaries. The one thing I will say is some of the padding and the leather seats were somewhat slippery. Maybe it was just too new, as this particular one had just 400 miles on the odometer. 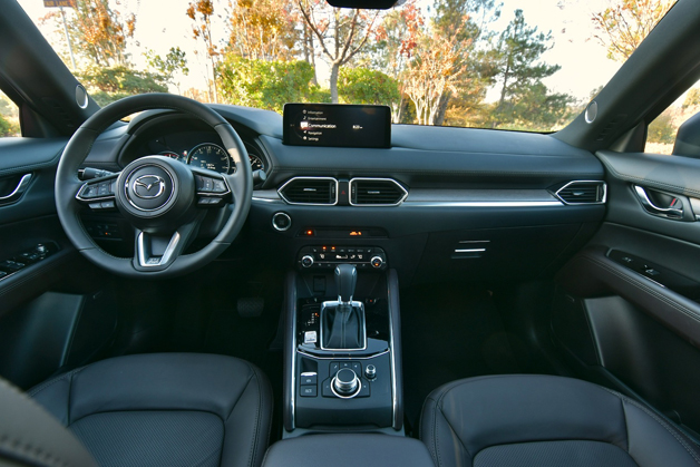 Comfort is great in any seat along with decent space throughout. I find a RAV4 more spacious, including the cargo area, but Mazda makes a larger SUV if you so desire.

Comfort is great in any seat along with decent space throughout. I find a RAV4 more spacious, including the cargo area, but Mazda makes a larger SUV if you so desire. This is supposed to be a compact utility vehicle after all, as others have seemingly increased in size to no end. Compared to the RAV4 though, and spending time behind the wheel of both, the Mazda is simply in another grade above given the legitimate luxury onboard. And that's just the inside environment; I have not even gotten to the driving bit yet! I am yet to try Kia's new Sorento and Hyundai's Santa Fe, but both will have to try more than their best to compete with the Mazda's class.

The real separator of what makes this Mazda so exemplary is the way it goes down a road—any road. On the highway, it drives arrow straight and is remarkably quiet (yes, luxury car quiet, shocker). And if you find yourself on a winding mountain road, the CX-5 is attracted to apexes like a large magnet. The handling balance shouldn't be this good in a mid-size crossover like this. Turn-in is keen and eager to change to whatever direction you desire. Body control is equally impressive and even more so when you consider the suspension is never harsh over bumps in normal driving, being actually smooth and compliant. 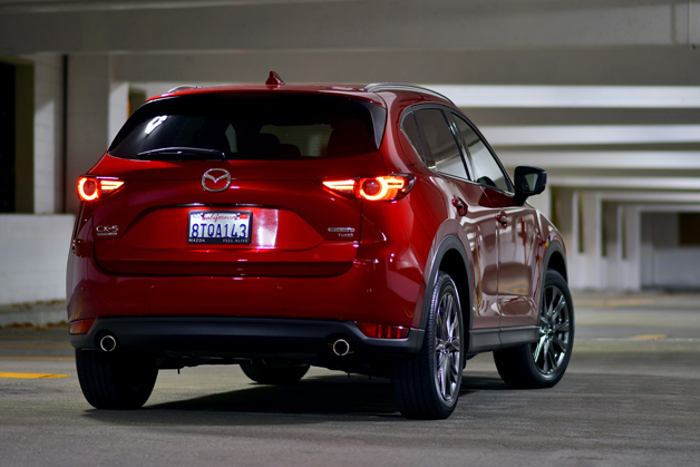 The real separator of what makes this Mazda so exemplary is the way it goes down a road—any road.

On a long, looping cloverleaf freeway onramp, the CX-5 displayed great adjustability. After turn-in, I steadily applied a progressing throttle which invoked small traces of mild understeer. As the corner's radius decreased towards the exit, I backed off the throttle which revealed a lovely bit of lift-off oversteer. This allowed the nose to find grip and have the rear rotate to aim straight for the apex which allowed me to pin the throttle and ride the way of turbocharged thrust all the way to the end. It's characteristics like this that place Mazda's vehicles high above any potential opponents; it's that good around the bends. Mazda's well-tuned all-wheel drive system also contributes to ensure optimal grip and power distribution in any scenario. 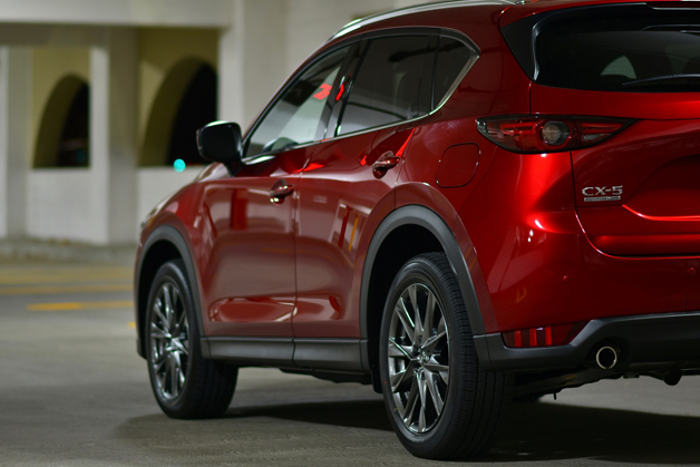 An older six-speed automatic does the shifting in an age of eight gears and CVTs, but the old six complies with smooth and quick shifts.

An older six-speed automatic does the shifting in an age of eight gears and CVTs, but the old six complies with smooth and quick shifts. It may only have six forward ratios, but it works harmoniously with and while matching the turbo engine's powerband. It's particularly responsive to manual gearchange inputs, too, when using manumatic mode. What's more is that Mazda's turbo creation uses an unusually high compression-ratio (for a boosted engine) that grants quick throttle responses and urgency. With the large torque output, the motor is generously flexible as it's able to produce big horsepower at reasonable RPMs. Lock yourself in third gear at 50 MPH, nail the accelerator, and the CX-5 simply takes off.

Fuel economy is the only metric that is not best-in-class, but still more than respectable. 70 MPH cruising yielded 30 MPG and averaged 24 during my time in mixed driving. While I enjoy the six-speed unit in practice, it does prohibit better highway mileage by running at a higher engine speed. Maybe a seven-speed with the same first six gears and a seventh gear overdrive could be something worth exploring for better high-speed mileage. Competitors may garner better economy, but then again the tradeoff is the relative artillery firepower  in performance that the mainstream Hondas and Toyotas just don't have in their vocabulary.

Pricing for this Signature CX-5 comes in as-tested at $39,225. It's not the cheapest thing, but a RAV4 Limited can easily cross $40k these days while a far less capable CR-V doesn't even breach $36k. The only reason you should consider an alternative to the Mazda is if you want a Hybrid vehicle, both of which Toyota and Honda offer with substantially improved fuel economies. But, after just your first short drive in a CX-5, you will be able to see what makes this vehicle so desirable. 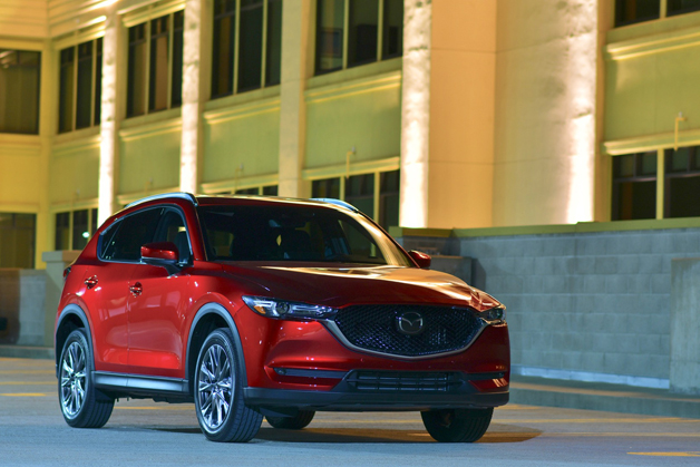 It's not the cheapest thing, but a RAV4 Limited can easily cross $40k these days while a far less capable CR-V doesn't even breach $36k.

Verdict: Like most Mazdas, it's the best vehicle in its class.