614 Sutter Street, Folsom, 916-353-0140, jwilds.com, @jwildsbbq
I'm spitballing here, but this is how I imagine the thought process went for the brain trust behind Historic Folsom's J. Wild's Livery & Feed. “We could convert one of our successful pizza restaurants (Chicago Fire) into a BBQ house and provide diners some historical context for its location.”  Pretty sound reasoning from over here in my saddle. Ownership has transformed the Sutter Street space into a top-notch smokehouse with some fresh décor, too, including murals and pictures of turn-of-the-century Folsom. 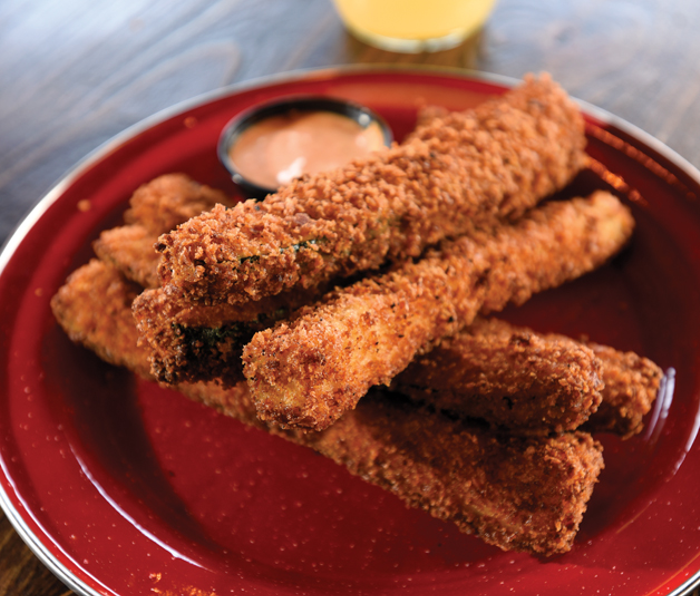 I hitched my iron horse up to where the original livery (aka stable) once stood and meandered inside to sample some of the proprietor's fare. I knew this was going to be meat-centric dining, so I started with fried zucchini wedges. They were what I was hoping for: large spears of the meaty marrows, coated in panko, and fried to a crispy exterior and al dente center alongside ranch and spicy aïoli.
After feigning interest in my companion's wedge salad (although it was good), I was ready to put the fork aside and get down to business. It may be sacrilege to some, but J.Wild's will flash-fry their ribs after taking the time to prep and smoke them to perfection. After being tossed in their house-made sweet barbecue sauce, the resulting appetizer becomes something entirely different: pork candy. Try it—I wouldn't steer you wrong. Just about the time I thought I’d had enough, out came the 3x3 family-style BBQ: three meats, three breads, and three sides. I chose ribs, brisket, and a half chicken as my proteins; charro beans, slaw, and Brussels sprouts for the sides, and two wedges of cornbread and a biscuit for the breads. The beans were my favorite of the sides—thanks to a hint of heat and queso fresco—though I probably hovered a bit too long, considering the trail ahead. The cast-iron baked sweet cornbread also put a hitch in my giddy-up; it was so good I ordered some to go. The chicken was moist with a crispy rub-crusted skin. The ribs had a distinct smoke ring and were juicy but not fatty or greasy; they also didn't "fall off the bone," which I appreciate, since I like to bite into BBQ ribs—not scoop them up with a spoon. J. Wilds gives you the option of a lean or fatty cut of brisket (known as the “flat” and the “point” in brisket-speak), and I chose the lean. The beef was mildly seasoned with their rub, fork-tender, and had just enough beef butter (OK fat) to retain its moisture. They were sold out of the server's recommended dessert (whiskey brown butter layer cake), so I grudgingly ordered the hot apple crisp—an oatmeal cookie meets hot apple pie meets vanilla ice cream. What's not to like?
After packing up enough leftovers to fill a chuckwagon, I expected a three-digit invoice, but the bill was remarkably reasonable, especially considering the quality. J. Wilds is family-friendly, so you can bring the li’l wranglers along; maybe they'll like the history, but they'll surely enjoy the BBQ.