I'm all about good value and finding bargains. I've tried on the Kitons and Brionis at Niemann Marcus, but a J. Crew Ludlow suit fits better off the rack and feels largely the same, quality wise. Or, you have the bargain yet tasty Argentine wines at Grocery Outlet. Trader Joe's Mac 'n Cheese—I could go on for ages. Imagine, then, being able to buy a brand-new BMW 7-series or Mercedes S-Class for $30,000 off. That's precisely what the Genesis G90 is.

Normally, for something to be discounted so much, it either has to be lacking in the features department, or about to pass its expiration date and spoil. However, Genesis' G90 is a bona fide executive, full-size, luxury sedan for those where the ultimate is the minimum accepted. It's no coincidence that this specific G90 receives an “Ultimate” badge at its trim level, and in this $76,695 G90 Ultimate, there wasn't a single option, as literally everything you can think and/or dream is included as standard.

But, let's move on to how this machine really establishes itself: Dapper is an understatement. The amount of stares the G90 acquired during my weeklong tenure with it was past belief. And yes, they were the good stares, not the ones that are aimed at Pontiac Azteks or AMC Gremlins. To call the Genesis striking is a disservice, such are the massive volumes of presence it carries. On the flip side, many also had no idea what a Genesis even is. Just please don't call it a Hyundai (Hyundai is the parent company and used to sell a Hyundai Genesis coupe and sedan the prior decade). 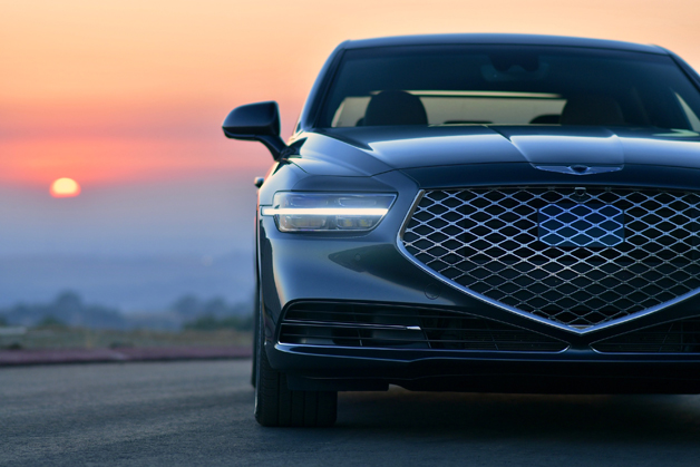 To call the Genesis striking is a disservice, such are the massive volumes of presence it carries.

From the oversized pentagonal grille, to the sharp yet somehow cosseting creases, and the saucer-like wheels ready to serve you crackers and brie for four, it has a demeanor that exhilarates the senses like no other sedan under a hundred grand. I LOVE those wheels by the way. Same with the flowing body line that runs like a stream from the front headlight all along the side and to the taillights. Park it next to a Bently Flying Spur and you'd have no way of knowing one of them costs upwards of $150,000 less. And, while the grille might look too oversized in pictures, trust me when I say it really starts to grow (not literally) on you in person.

This is a luxury car after all, so while a sharp suit is important, the guts beneath are what really matters. Unbutton it, swing open the doors, and you won't be disappointed. Lush and vibrant Napa leather is draped just about everywhere. And where there's not leather, you'll be greeted by Alcantara and metal. Oh, and there's an absolute gorgeous treatment of unlacquered open-pore wood trim that's velvety smooth. It's not just luxurious, but majestic. 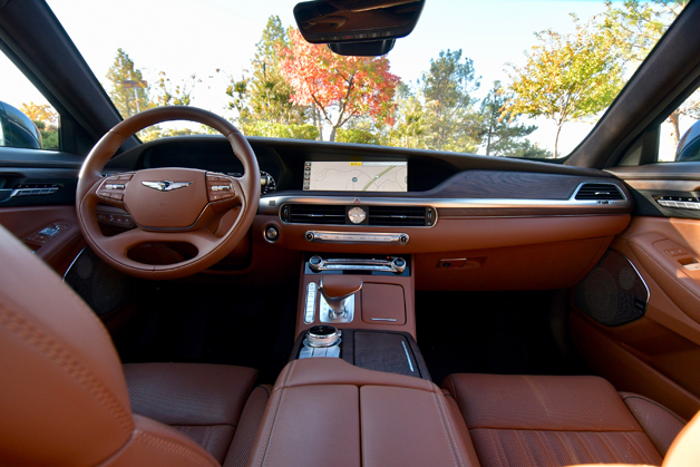 Lush and vibrant Napa leather is draped just about everywhere. And where there's not leather, you'll be greeted by Alcantara and metal.

The rear seat is more reminiscent of the drawing room at Downton Abbey than a car. This Ultimate came with dual rear screens for those lucky occupants plus a center armrest with full controls over the infotainment system and recline adjustments for the rear chairs. Leg space is huge due to the 124" wheelbase, but, if nobody is riding shotgun, you can even command the front passenger seat to tuck and move forward to grant even more leg room and allow you to escape into full Palm Beach sunbathing mode.

While the interior is pure first class and far and away subjectively and objectively the nicest interior in any new car under eighty grand, there is admittedly a sense of theater missing that is present in the current S-class. But then, when an S-class is at minimum $30,000 more, it should. However, the gap isn't nearly as wide as you'd think. How Genesis was able to cram this much quality into a car of this price is mind boggling. 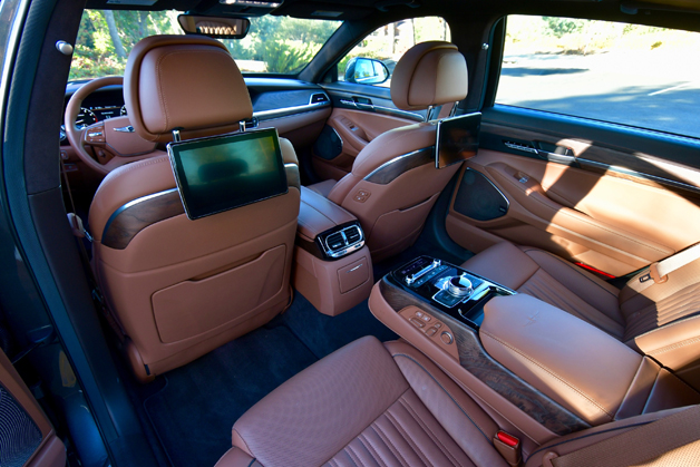 This Ultimate came with dual rear screens for those lucky occupants plus a center armrest with full controls over the infotainment system and recline adjustments for the rear chairs.

Under that long “bonnet” rests a suitably potent 5.0L V8 that does without turbocharging to a most musical effect. Though lazy at first in the name of smoothness and sophistication, lean into it and the V8 awakes to a raucous roar that would make Mopar Mike proud. The 425 horsepower V8 ends up taking the G90 to 60 MPH in five seconds flat, which, while quick, does lag behind a six-cylinder BMW 7-series equivalent. But who cares, a person of a stature deserving of this G90 should never be hurried, nor need to be. What was surprising was the frugality, averaging nearly 24 MPG and reaching a steady 29 MPG on level 70 MPH freeway.

Isolation is the name of the game when on the move, as it should be in a luxury car, with the G90 shielding you from road and wind noise, as well as bumps, supremely well. Behind the comfortable steering wheel, the G90 is very easy to drive with its road manners. Despite the vast dimensions of 205 inches long and 75 inches wide (not including mirrors), placement is effortless at speed. Driving through more crowded streets of downtown Carmel took a little more thought but was largely unchallenging. Parallel parking into a spot meant for a Civic was a breeze, thanks to the array of sensors and cameras onboard. 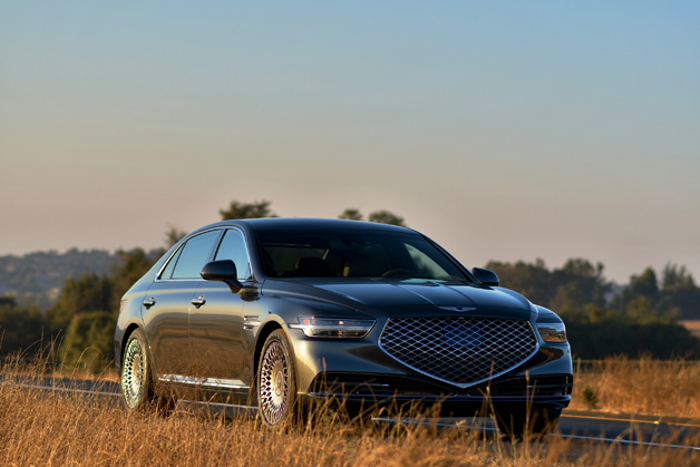 Isolation is the name of the game when on the move, as it should be in a luxury car, with the G90 shielding you from road and wind noise, as well as bumps, supremely well.

Handling...well, handling isn't exactly a priority. Turn the wheel and the G90 will go the direction you ask, mostly. Quick changes of direction make the size and weight become apparent while the steering is accurate, but more relaxed than on a Genesis G70 sport sedan. But, who are we kidding—this isn't a car made for handling but colossal comfort. Hours on the freeway proved no problem, thanks to wonderful ride quality that makes bumps vanish, confident tracking, and the helpful lane-keeping assist that provides small inputs in a semi-autonomous fashion. The Genesis system, also found on Hyundais, is far better than on other recent cars I've tried with similar aids.

Genesis' G90 rewrites the generally accepted luxury principles. True luxury—ultimate luxury—shouldn't have to cost both an arm and a leg; a single arm will do just fine. It's a marvel going into this new decade that a car with so much style, quality, and luxury can exist at an almost sensible yet entirely reasonable price. The typical Genesis 10-year warranty can't be forgotten either. And because Genesis hasn't quite caught on the way it should with such amazing products, the G90 also offers exclusivity for the time being. And that there lies the one almost-problem with the Genesis G90: It doesn’t send the brand statement and image that an S-Class Benz does. Driving a new flagship Mercedes sends a message about your success, but a Genesis just doesn’t carry that same weight yet, which is a real shame. After a week with it, the Genesis G90 is something to aspire to. And remember, Genesis is how old? A knockout like this right out of the gate should seriously worry the established crowd of luxury sedans. It might be the ultimate Genesis, but the G90 is also the ultimate in luxury car value. 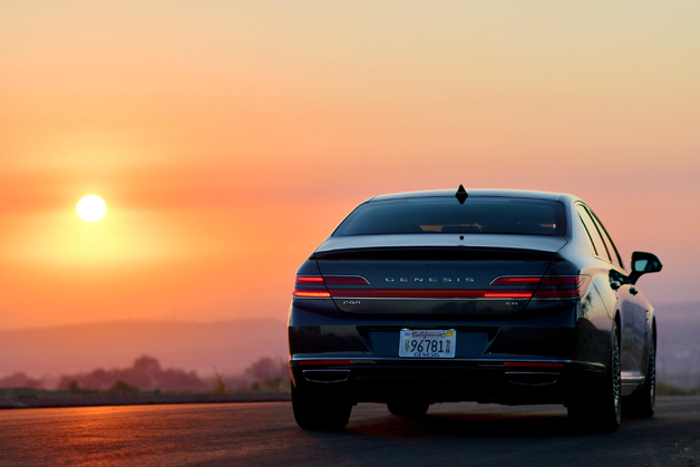 Pros: Luxury and style at an unrivaled price