Husband-and-wife-team Seth and Lauren Totten are bonded over their mutual love of running. Lauren first discovered her passion for it while playing soccer and ended up starting her high school’s first cross-country program—which still exists today. Her first “magical” marathon experience was in 2014 at Grandma’s Marathon, where she ran a 2:35. However, her most special of accomplishments was running a half marathon mid-pack at six months pregnant. “I surprised myself and ran a 1:44; my personal record is 1:12,” she says proudly.
Seth started running in order to become a better baseball player but realized the sport he actually needed to pursue was running. He ran collegiately, eventually finding the sport of triathlon, and turned to marathons after marrying Lauren. “I love running because of the grind; to show up, work hard, and run fast…it’s part of my core,” he says. 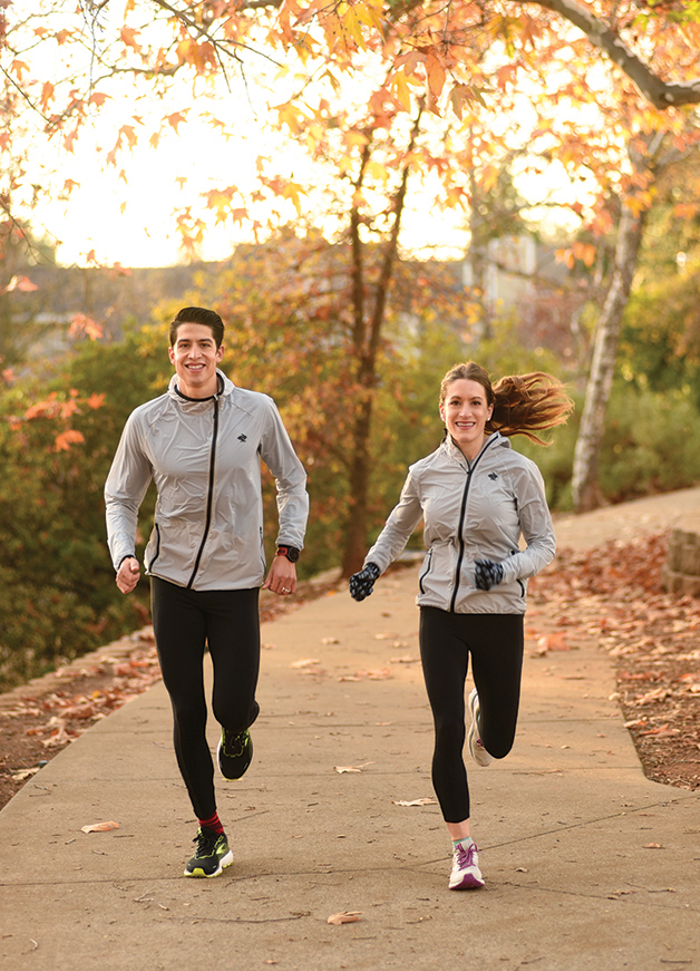 His best was running 2:14 and taking fourth place at the Dublin Marathon. “[It] really ignited a fire in me to continue pursuing the sport at the highest level,” he says, adding, “I still believe I have a much faster marathon in me.”
With races being cancelled due to the pandemic both Lauren and Seth’s days are now looking different—especially with infant son Lachlan added to the mix. They’re both keen on showing him the joys of running and the great outdoors. “I’m able to help my son explore [and] that fills me to the brim,” beams Lauren.

Workout snack: (Lauren) Pre-workout: buttered toast or toast with nut butter and lots of coffee; Post-workout: a smoothie. (Seth) Same, although I also have a bowl of oatmeal or muesli along with my smoothie.
Gear/gadget: We both run for Rabbit (a running apparel company) and can’t say enough about their comfy clothes! We also enjoy COROS watches and AfterShokz headphones.
Athlete/role model: (Lauren) I’m impressed and motivated by other moms who are getting out and running fast, like Sara Vaughn and Keira D’amato. I’m also a huge Courtney Dauwalter fan.
Quote/mantra: (Lauren) Job 37:6: He says to the snow, ‘Fall on the earth,’ and to the rain shower, ‘Be a mighty downpour.’

Twenty-five-year-old Aspen Kohl Ladd says she used to be “a shy kid who needed something to do.” So, when she was 14, her father took her and her brother to an MMA gym. “I realized in the first week of training that this was what I wanted to do when I turned 18,” she recalls. Fast forward to today, and the accomplished MMA fighter for the UFC currently ranks third in the world for her weight class.
“I love the competitive nature of the sport and the freedom fighting has given me,” she says. A lot of her time is spent in grueling training sessions—6-8 hours a day, five days a week. And when Ladd actually competes around three times a year, there’s an added 8-12-week “fight camp” to ramp up training. 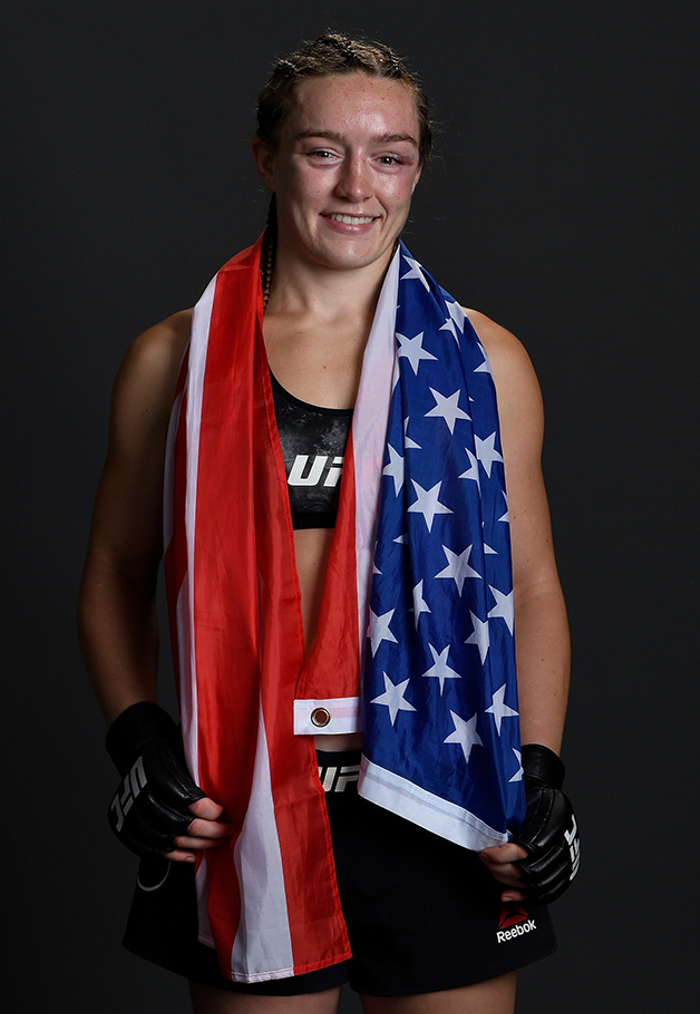 She’s now focused on building the business aspect of her career—during some downtime she gained due to a recent injury—with a website launch (aspenladd.com), seven-part docuseries, hiking vlog, and spokesperson gigs with companies like AllTrails and ESP Fitness.
Despite the new opportunities, Ladd is eager to get back to fighting once she heals and hopes to have the title of “world champion” one day. In the meantime, she wants to “enjoy and embrace whatever this crazy ride brings.”

Workout snack: I drink 1-2 gallons of water with 4-5 scoops of Optimum Nutrition’s BCAA and eat 4-6 times a day.
Gear/gadget: Onx gloves for anything fighting-related and the AllTrails app.
Athlete/role model: I admire success in general [along with] work ethic, commitment, integrity, and humility.
Quote/mantra: Just show up and give 100% of what you have. Each day you keep showing up you will find that your 100% looks different than it did the day before.

Shadrack Kiptoo Biwott had humble beginnings. “Growing up in rural Kenya I had to run [miles] to and from school each day,” he says. Then, at 14, he asked his older brothers for a pair of running shoes—something he’d never owned. “My brothers were professional runners and they agreed to share their shoes with me on the condition that I go for a run with them. Foolishly, I agreed and ended up 10 miles from home, exhausted…[but] I ran every day after that,” he says. 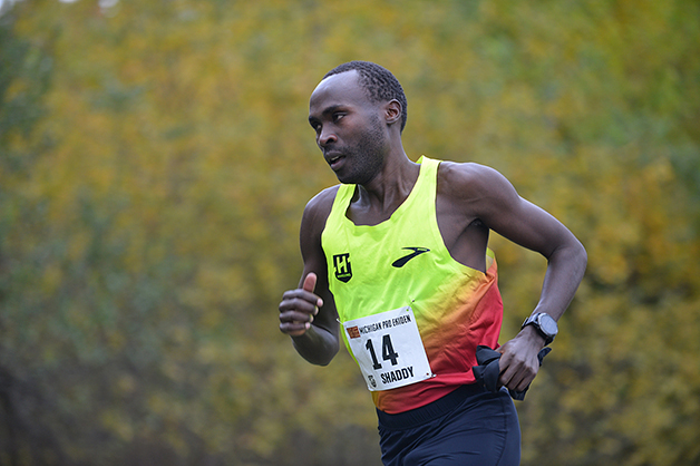 Biwott usually runs two or more marathons per year plus a few half marathons and has come in third and fourth in the Boston Marathon, as well as fifth and seventh in the New York City Marathon. His ultimate goal is to win a major marathon, which is not an easy feat. “On more than one occasion I’ve trained diligently for my race only to find myself too injured to compete on race day,” he says of the highs and lows of competing. But in the end, it’s the exhilarating feeling running gives him that keeps him going. “The wind in my face and the ground passing beneath my feet…to me running represents a sense of freedom.”

Amitis Pourarian remembers a family friend taking her to Folsom Taekwondo Center in the ’90s (it still exists today!) and introducing her to the art of taekwondo. “I loved that it was an individual sport and you could be as good as you wanted to be. No one had to pass you the ball to make the shot; it was up to you how good you could get,” she says of the intricate sport.
The four-time national champion and former USA Taekwondo team member also happens to be a seventh-degree black belt and the highest-ranking female in the United World Taekwondo Association. Preparing for her eighth-degree testing in 2023, Pourarian’s ultimate goal is to be a ninth-degree black belt. 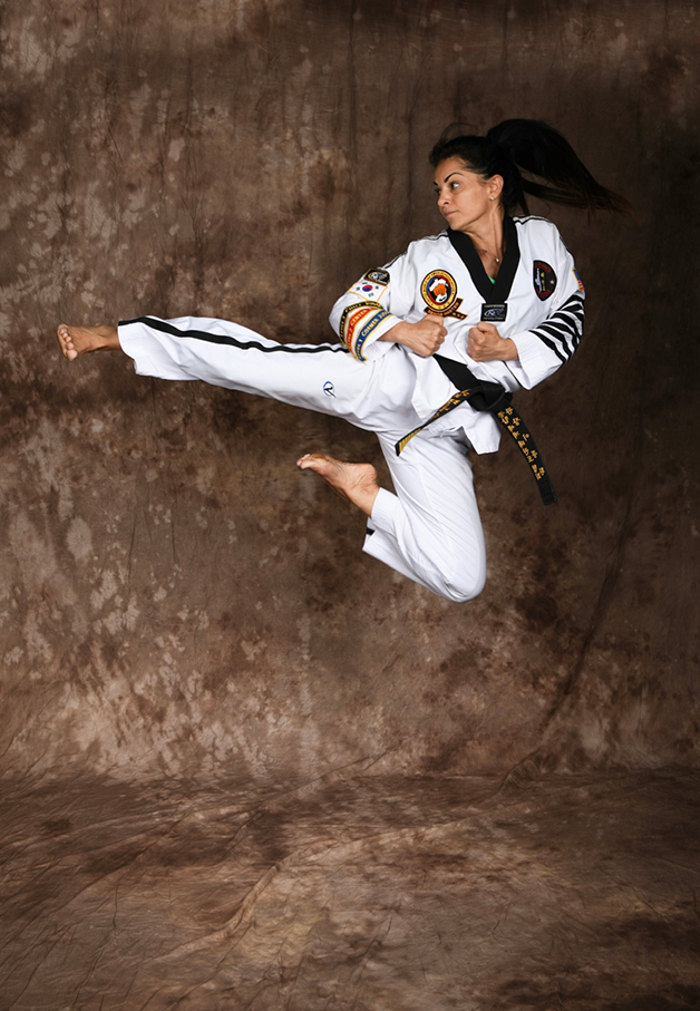 A lot of hard work goes into her success, including 100 push-ups every day and consistent training, along with the cardio kickboxing and taekwondo classes she teaches at her studio in Roseville, THE STUDIO Martial Arts & Fitness. And through her training, she’s seen it all—a torn hamstring and a broken wrist and nose—but says it’s all part of the game. “The only thing I would call a failure would be to not [compete]. When you compete—win or lose—it’s an experience, and we all learn from experiences,” she says.

Workout snack: A peanut butter and banana sandwich before any competition!
Workout gear/gadget: Muscle floss bands.
Athlete/role model: I strive to be my own role model. If I wouldn’t want to follow me than I need to change my ways.
Quote/mantra: If it can be done, why not by you?
by Tara Mendanha
*Photos by Dante Fontana © and wholly owned by Style Media Group—please don’t steal our copyrighted photos. For more information about our editorial photos, please click here to contact us https://www.stylemg.com/pages/contact-us
Lauren and Seth Totten photo by Dante Fontana. Aspen Kohl Ladd photo by Mike Roach/Zuffa LLC/Zuffa LLC via Getty Images. Shadrack Kiptoo Biwott photo by Dave McCauley at runmichigan.com. Amitis Pourarian photo by Lisa Howard Photography.