The fashionable Sonata gains a hybrid variant, and some insane efficiency gains.

Let's get this out of the way. If you're considering a hybrid, it's because you want efficiency and peak fuel mileage. With that being said, prepare to be impressed: I averaged 45 MPG during my time with the Sonata Hybrid Limited. On a level freeway mileage test, that number stretched to 50. Better yet, the base hybrid Sonata is said to average 50 and net 54 on the highway, thanks to its lighter weight. Those numbers slightly better the Sonata Hybrid's closest competitor, the anonymous Camry Hybrid. How's that for quick consumer advice? This new Sonata Hybrid is the most efficient and affordable mid-size sedan on dealer lots today. 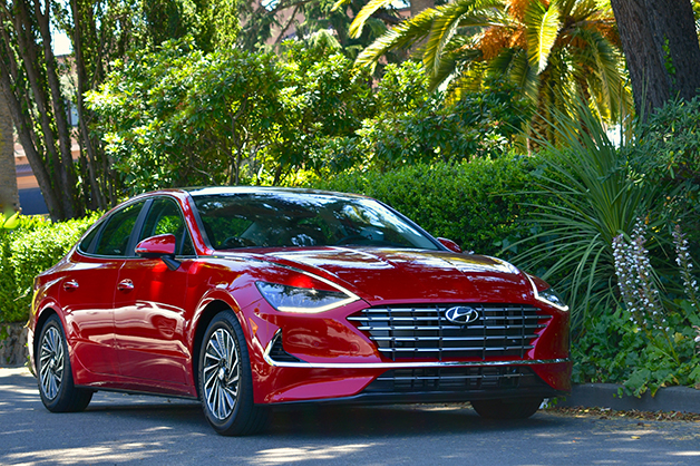 But of course, there's more to it than just a highway mileage number to this car. For example, we have the looks. This is the second 2020 Sonata I've driven, a couple months apart, and the looks have not worn down one bit. I think it looks stupendous, giving the impression of a much more expensive machine with its fanciful curves and large, but tasteful grill. Instead of the “over-styling” trend that's affecting many Japanese cars right now, the South Koreans have gone for a much more elegant and understated design with the Sonata. That large grill has a little bit of Aston Martin to it even.

My favorite part is the chrome trim that extends up from the headlights all the way to the windscreen. Start the car, and you see how part of that strip is actually the LED daytime running lights. It seamlessly fades into the rest of the chrome. So cool. The flat rear plays off the more round front nicely, with all the curves tapering to a point at the back. Neatly integrated spoiler, too. Park it next to a Camry, and from any angle, the Sonata wins big. 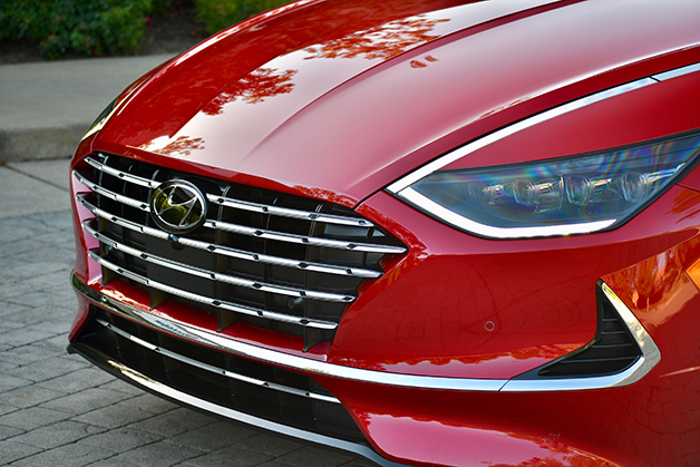 My favorite part is the chrome trim that extends up from the headlights all the way to the windscreen.

The same elegance protrudes into the cabin as well. If anything, the interior bests the exterior. Mazda used to be the un-challenged champion of instilling practical luxury into affordable cars, but Hyundai is catching up fast. From the design layout to the quality of materials used, this top-of-the-shelf Sonata Limited lives up to the hype. Priced like floor seats but adorned more like a box seat at the Lincoln Center.

It's thoroughly modern in hardware, with all the latest technology. Apple CarPlay, Android Auto, active safety systems, semi-autonomous driving, it has it all. Now, you might notice that there is no gear knob in the center console. How do you drive it then? Easy, look for the several buttons marked “D” “R” and “P” where the shifter would normally be. They look beautiful, with a glass like finish to them and provide an expensive feel to the touch. Yes, they're slower to respond than moving a stick back and forth, but it does provide some theatre. It also increases the sense of space in the cabin having no intrusive stick.

The leather seats are soft, but I still suffer a similar issue to the last Sonata I drove; the driver's seat is too high. I'm 5' 10" and the seat just doesn't go low enough. It could just be me, as I prefer sitting low in sports cars, but I can't help but feel like I'm perched on top of the seat rather than actually in it. No matter for my adult passengers, though, who had zero complaints on a 250-mile day trip about comfort or space. 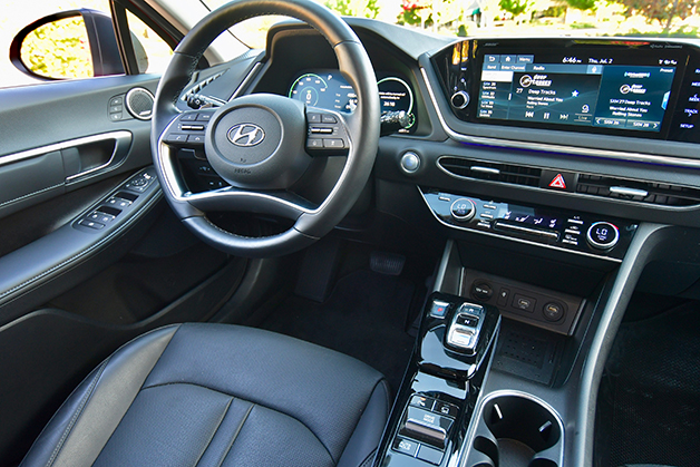 Apple CarPlay, Android Auto, active safety systems, semi-autonomous driving, it has it all.

Being the hybrid, you do lose the sunroof in place of some solar panels. Yes, you heard me right; this Sonata has actual solar panels, which Hyundai claims to give 2 extra miles of range each day for the onboard battery. As long as it's not cloudy. The panels do look impressive up-close and are definitely a talking point.

Now on the road, this is not a car designed for mountain switchbacks. While the steering is accurate enough, there is virtually no feel coming through the wheel and responses from the car can be timid. The low-drag tires contribute to understeer as you push the nose, but it still isn't terrible by any means when compared to other hybrid cars. While not a car meant for carving up backroads, it is more than plenty capable for the average driver.

That aside, at freeway speeds, the Sonata Hybrid is very stable and easy to control. Wind noise could be better, but again no complaints after a long day trip. It's a very easy to car drive, aided by the impressive lane keeping semi autonomy that Hyundai has designed when on long stretches. I did have to get used to the brakes when coming to a stop, being a little grabby, but after that, stop-and-go traffic was easy. You could also, at times, feel a slight shudder from the engine turning back on when pulling away from stops, but I haven't experienced a hybrid that doesn't do that. 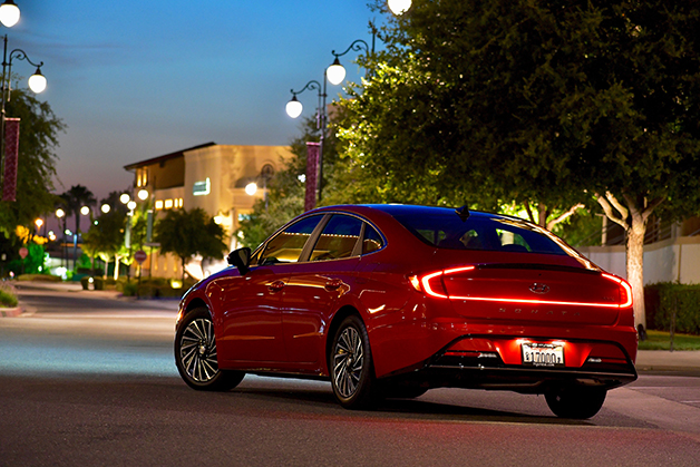 While not a car meant for carving up backroads, it is more than plenty capable for the average driver.

The engine is a 2.0L inline-four rated at 150 horsepower. Together, coupled with the electric motor and small, 1.6 kWh lithium-ion battery pack, combined output is 192 with 210 pounds of torque. In operation, it is smooth enough for a four-cylinder and largely unobtrusive. What does help is the use of a conventional automatic transmission instead of the typical CVT that hybrids use. It makes the car feel more “normal” in acceleration and less boomy when accelerating hard as a CVT would hold RPMs and cause more noise from the engine. So, if you’ve never liked CVTs, the Sonata Hybrid offers sanctuary.

Performance is perfectly...adequate for this car's mission. 0-60 averaged eight seconds flat, or about half a second behind the all-gasoline Sonata turbo I tested prior. Passing performance from 50-70 MPH was a respectable 3.9 seconds, being only a tenth off its stablemate. Uphill, that number did slow to 6 seconds as the hybrid powertrain struggled more on steep grades. Again, this isn't a quick car, but it's not designed for street racing. At least you'll smoke Priuses while getting almost as good as mileage in a FAR more stylish ride. 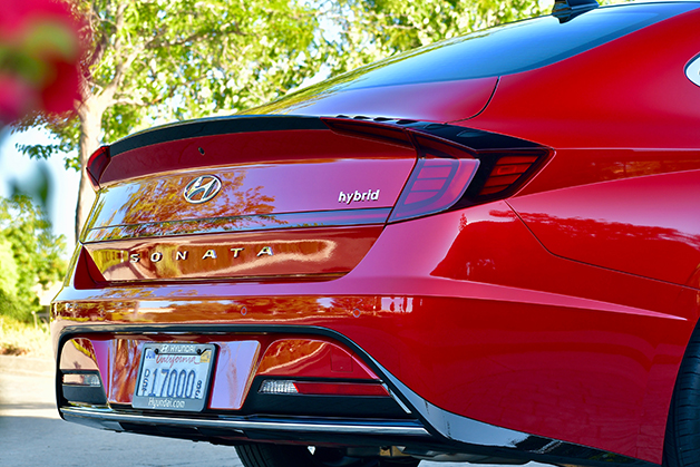 I enjoyed my time with the Sonata Hybrid. As an everyday commuter, it has a wonderful interior environment full of the latest tech and excellent furnishings for the price point. And it looks elegant on the outside, too, with far more class than a Camry or Accord. But again, the real reason for this car is the towering fuel economy. Couple that with Hyundai's incredible 10-year warranty on new cars and it becomes superb value with this much equipment and the overall quality. The sticker price of just over $36k sounds like a lot, and it is, but it still represents good value considering the equipment and quality onboard.

Being only marginally more expensive than its comparable gas-only Limited twin and considering how Sonatas will be 99% used for cruising and commuting, I have to recommend the hybrid over the regular Sonata. For the most part, they drive basically the same, look the same, feel the same, yet one gets 50% better overall mileage. Who says hybrids have to be ugly? Move over, Prius. 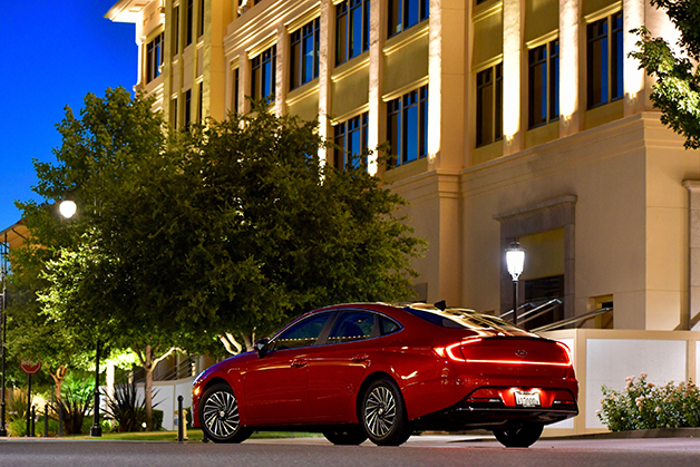 As an everyday commuter, it has a wonderful interior environment full of the latest tech and excellent furnishings for the price point.

Pros: Incredible mileage, inside and out style and tech

Mitchell Weitzman is a resident of El Dorado County and graduate of UC Santa Barbara. He’s been around cars his whole life and loves racing, such as Le Mans and Formula 1. Mitchell is also a seasoned driver with experience at Laguna Seca and Circuit of the Americas. He loves being able to tell a story through his words and pictures.