The Hot List: Top Tacos from Placerville to Roseville 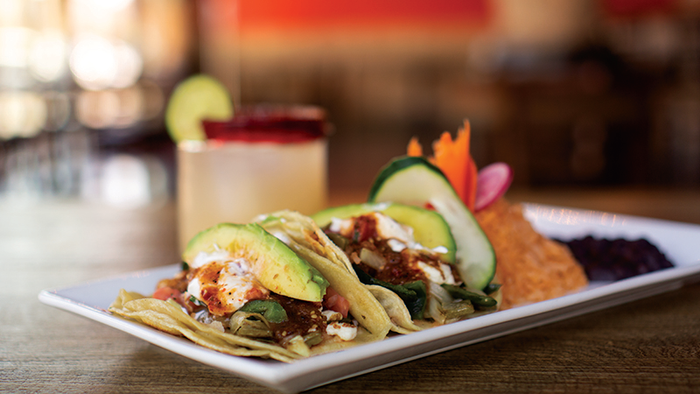 The Tacos de Rajas at Mezcalito (locations in Rocklin and Folsom) are a fun, and tasty, twist on a traditional meaty taco. With a combination of cactus (nopal), roasted poblano peppers, caramelized onions, pico de gallo, grilled queso fresco, and sour cream, these veggie-filled vessels are then topped with Mezcalito’s signature guajillo salsa. If that hasn’t made your mouth water, we don’t know what will! mezcalitocuisine.com 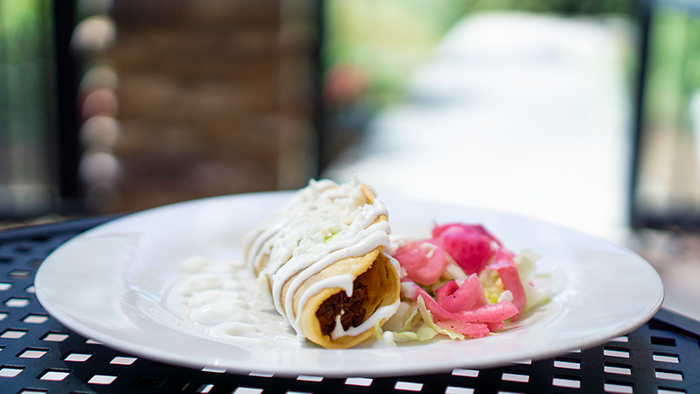 Mashed potatoes on a taco, anyone? If you answered “yes, please” then try the Tacos Sinaloenses at Mexquite in Folsom. Crispy corn tortillas are filled with mash and their classic shredded chicken or beef; topped with a zigzag of sour cream, queso fresco, lettuce, and marinated red onions; and served with Mexican rice and refried beans. Sounds—and tastes—like comfort food to me. mexquite.com 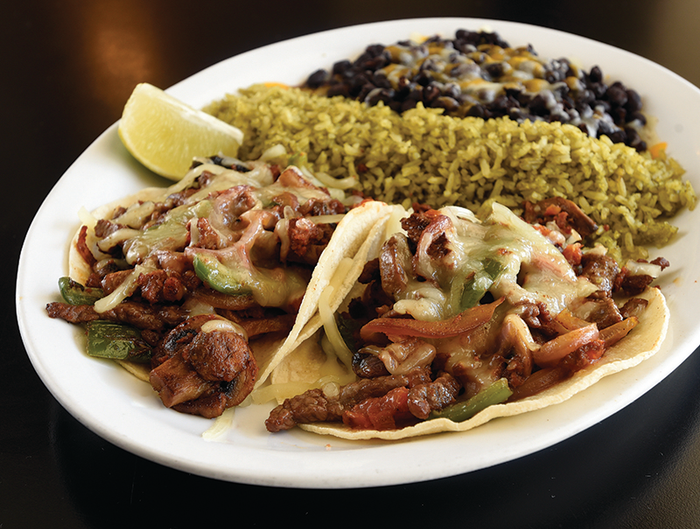 This next one’s bursting with flavor. The Tacos Chilangos at Cascada in Placerville have all the staples of a good taco: juicy meat, a hint of spice, and flavorful accompaniments. Here, sautéed steak and chorizo with onions, jalapeños, mushrooms, tomatoes, and jack cheese are piled into corn tortillas. One bite of these and you’re in taco heaven. cascadainplacerville.com 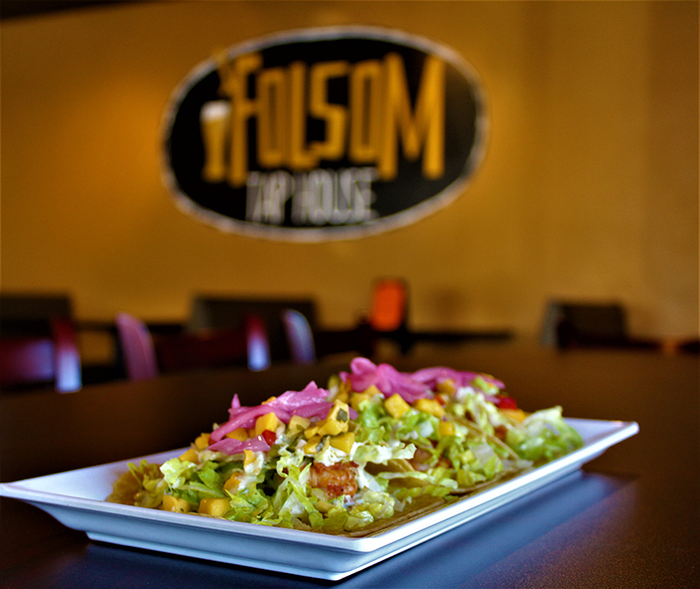 We’ll never say no to shrimp tacos. And when they’re Folsom Tap House’s Spicy Sriracha Shrimp Tacos, you know we’re making a beeline for them. Grilled Sriracha-glazed prawns are complemented by a summery, sweet mango salsa, pickled red onions, lettuce, and a piquant roasted green chili sauce. Get in my belly, already! folsomtaphouse.com 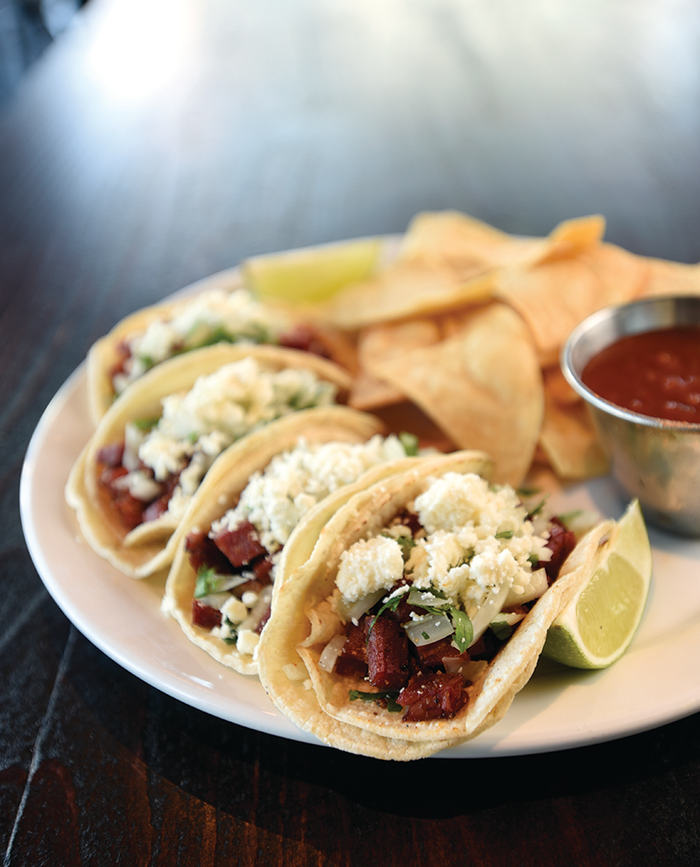 We love a tried-and-true taco. We also love those with a twist. So, when we saw Crisped Corned Beef Tacos on the menu at Goose Port Public House in Roseville, we had to put them to the test. Contrary to what you might think, these tacos are anything but dry and exude flavor—especially when paired with Cotija cheese, salsa, and lime. Taco ’bout tasty! gooseport.com 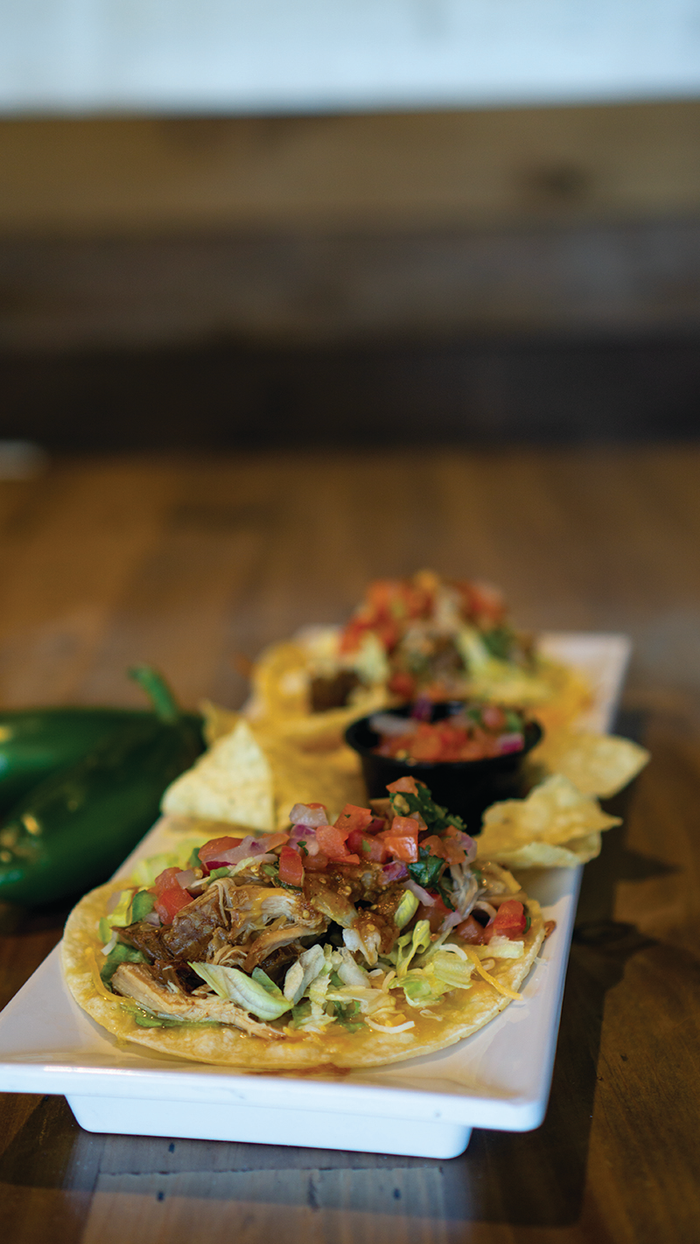 Folsom’s Rock-N-Fire might be famed for their pizzas, burgers, and wings, but did you know they serve tacos, too? The Carnitas Tacos—which boast delicately tender braised pork that’s seasoned to perfection, Colby-Monterey Jack cheese, and pico de gallo on soft corn tortillas—are particularly praiseworthy. Understated, yet undeniably tasty, these are worth a try. rocknfirerestaurants.com 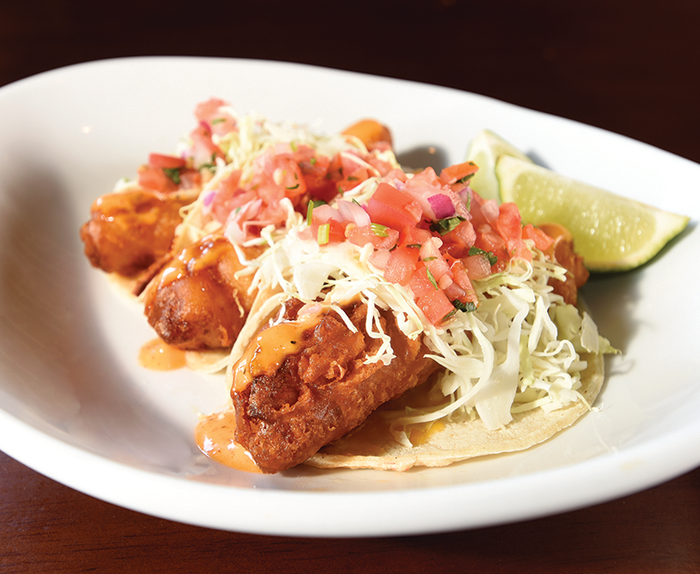 There’s something fishy about the Pescado Tacos at Bar 101 in Roseville; they shouldn’t be this good. Crispy beer-battered cod is topped with pico de gallo, cabbage, jack cheese, and a delightful house-made sauce on corn tortillas. Throw in a squeeze of fresh lime and you’re somewhere coastal, sipping on a margarita, and digging your toes in the sand. bar101roseville.com 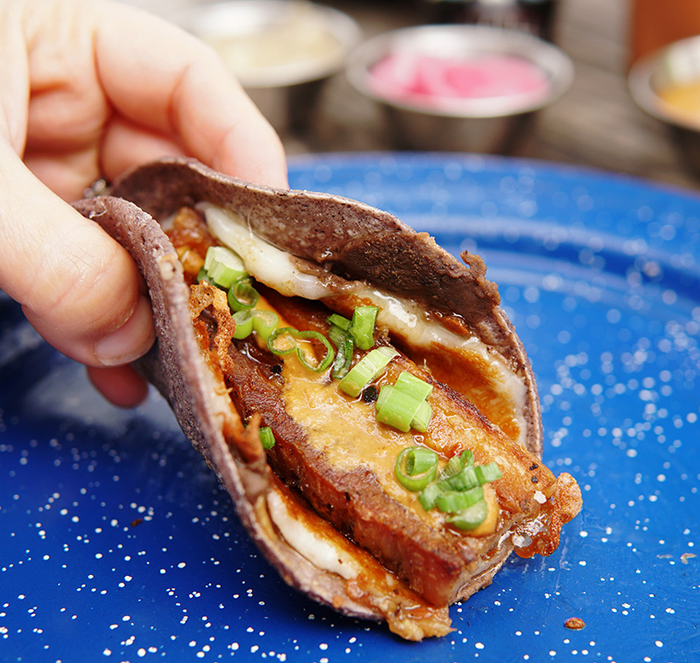 There’s no wrong order at Nixtaco in Roseville (even their vegan tacos are top-notch), but the Pork Belly Taco is our current go-to. Made from slow-roasted belly that’s chilled, sliced, then seared to order, they’re glazed with a chipotle, star anise, and coriander-infused honey glaze and served with grilled cheese, refried beans, peanut chipotle aioli, and scallions on a scratch-made tortilla (with corn ground in-house). If variety is the spice of life, Nixtaco reigns supreme. nixta.co 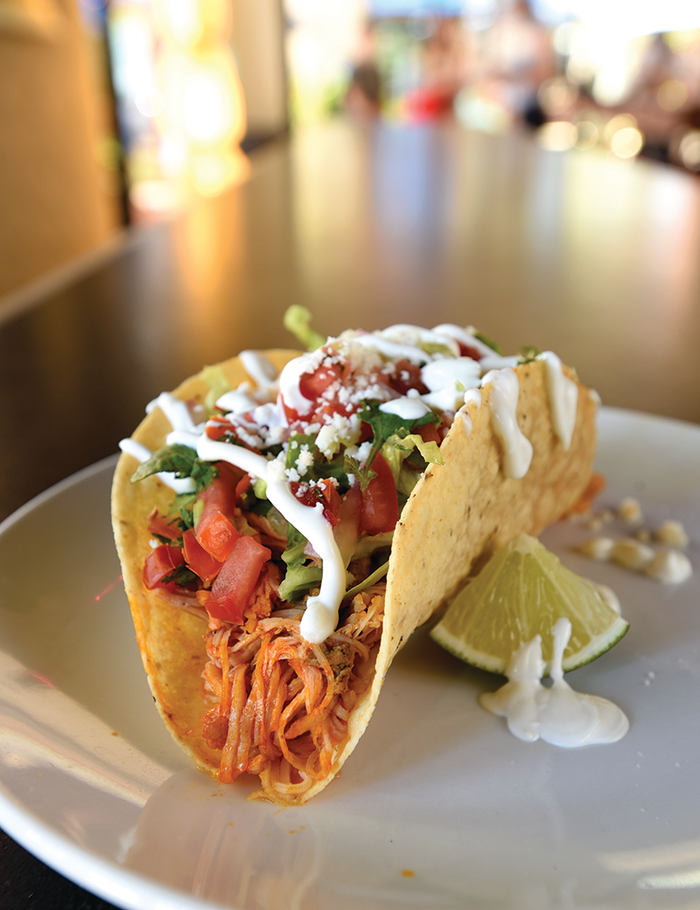 You really can’t go wrong with the Tacos Americanos at Zócalo. Crispy tacos cradle succulent braised chicken, lettuce, serrano salsa, crema, pico de gallo, Jack and Cotija cheese, and their homemade hot sauce. Once you start shoveling one of these babies into your mouth you’ll be hooked. zocalotogo.com La Rosa Blanca in Folsom stays true to its roots and serves up Mexican fare without the bells and whistles. Modest yet flavorful, their Tacos de Papa are a house specialty and a simple, satisfying treat. The crispy tacos are filled with a combination of seasoned potatoes and smoky chorizo and served with rice and beans. Sounds filling? That’s because it is. 916-673-9085 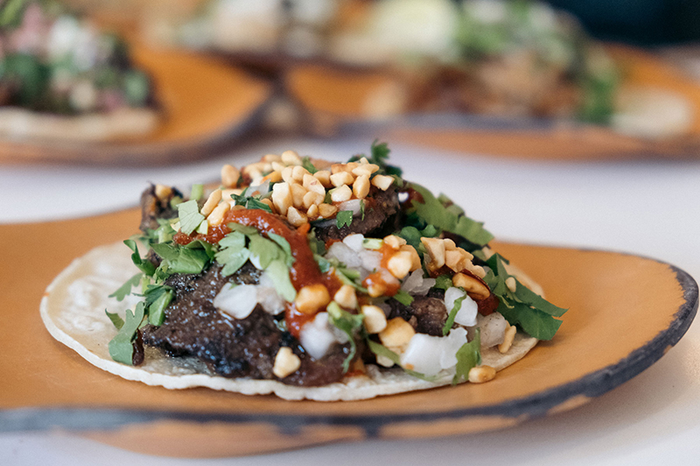 Folsom’s Mas Taco Bar thinks the taco is the perfect vessel for global flavors. They’re not wrong. Just take one bite of their Vietnamese Pork Tacos and you’ll instantly be transported across seas and continents. Sweet, salty, fragrant seasoned pork is topped with onions, cilantro, Sriracha, and—the best part—peanuts. It’s a feast for the senses. mastacobar.com 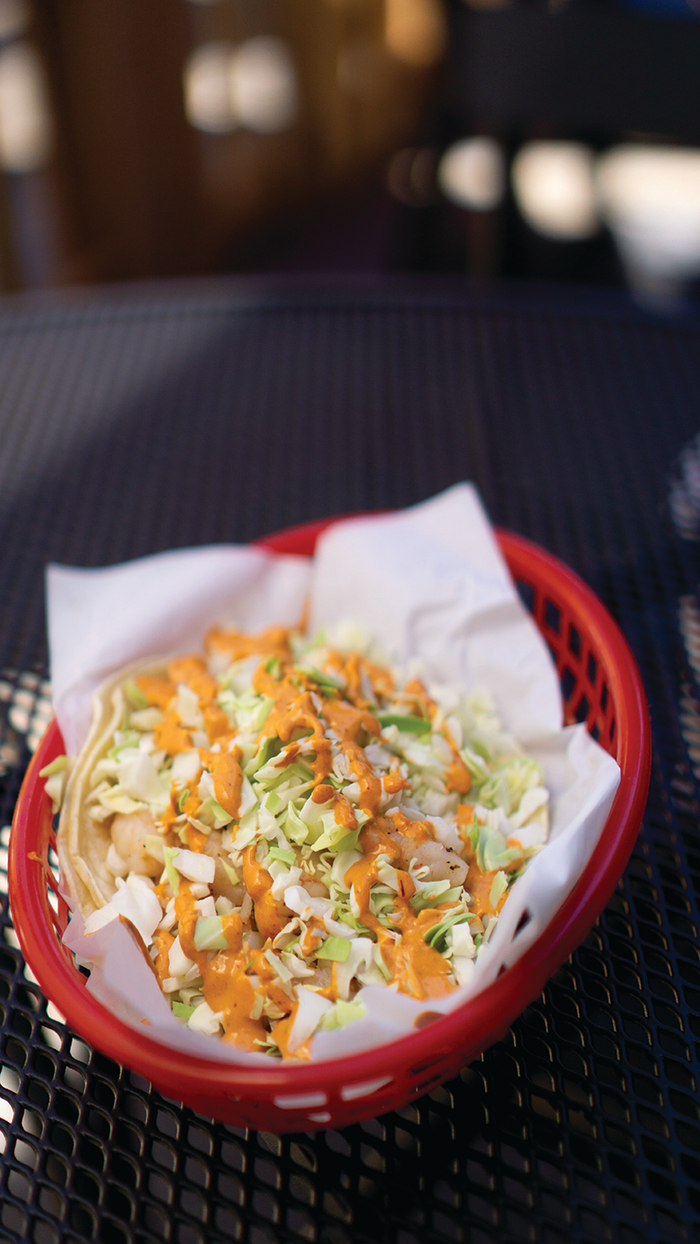 If you ask the regulars for recommendations at Sutter Street Taqueria, they’ll tell you to try the shrimp—and with good reason. Their Shrimp Tacos (heck, their shrimp everything) are loaded with tender prawns and tossed in a light, savory sauce that brings a brightness to the flavor palate. Pro tip: Order two servings since they’ll be gone in no time. sutterstreettaqueria.com

11:00am · Virtual Event
View All Add Your Event