Remodel Reveal: From Drab to Fab It's 2020, and modern design is en vogue—so it's reasonable to think that owners may be passing over country décor in favor of more contemporary elements. But it takes just a peek at the photos from this modern farmhouse-inspired renovation to know that the combination of country chic and clean-brushed metals creates a stunning look well-suited to modern California living.
At the helm of the project were Jake and Dan Oliver, a father-son duo and co-owners of general contracting firm Terra Inc. Construction (terrainc.net). With an approximately $150,000 budget and impressively short six-week timeframe, the company flipped the 2,735-square-foot home from a relatively monotone and generic space into an inviting and modern country escape. "We went for a combination of traditional and country farmhouse design on the interior with the large, dark blue island in the kitchen and blue vanities," says Jake, "as well as a farmhouse sink and a combination of brushed gold and matte black finishes throughout."
The blue, cream, and pure white color scheme was carried into the master bathroom, where the Olivers opted to replace a deck-mounted, step-up bathtub with a freestanding and modern bright white soaking tub. The double vanity was replaced with blue cabinets and gold hardware, with gold-framed round mirrors, and above-counter sinks to mirror the bathtub's gentle curves. The resulting final product is a bright and attractive escape that feels much more open and intentional than the original space. 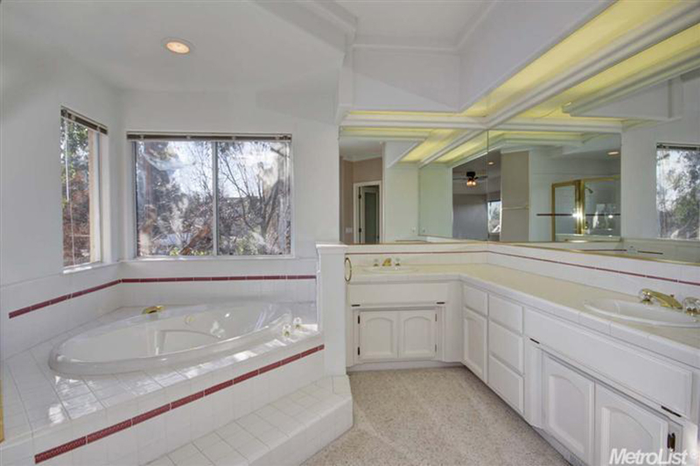 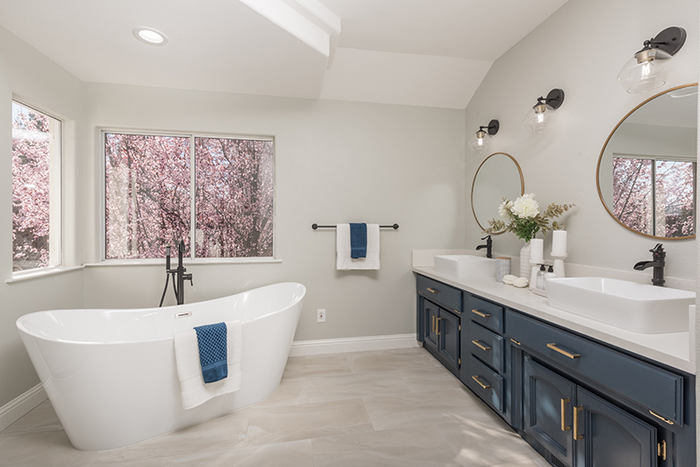 Terra Inc. Construction executes approximate 15 home flip projects a year and has been in business for over 40 years, so they've learned what homes make for the best projects. "The house was a good candidate for a flip, because it had good bones and a nice open-concept floor plan in a good location," says Jake.
For the project, Terra Inc. Construction focused on the kitchen and bathrooms, though the entire home got a facelift. According to Jake, remodeling your kitchen increases your home's resale value more than any other room, followed by bathrooms—especially master baths. This advice mirrors a 2019 study from popular décor and renovation company houzz.com, which found that approximately 30% of home renovation projects were kitchen remodels. Despite being the most expensive room to address—the same study reported a $14,000 average price tag per project—the returns are high. Remodeling Magazine's 2020 Cost vs. Value Report found that homeowners in the Sacramento area recouped anywhere from 49-74% of the renovation cost in increased home value when it came time to sell.
Jake recommends homeowners try to save money on their remodels by shopping around for contractors—but cautions against making the decision based entirely on price. "Get multiple bids from licensed contractors who have insurance—both general liability and workers comp—to protect you as the homeowner from liability." He also suggests homeowners consider remodeling based on craftsman, country farmhouse, or modern aesthetics, all three of which are currently popular with homebuyers. 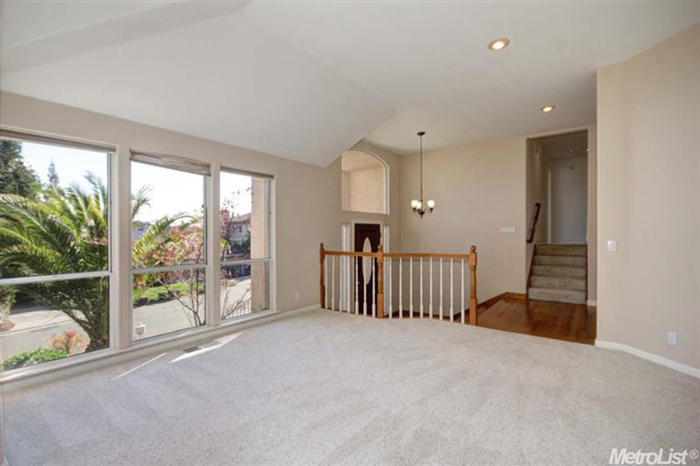 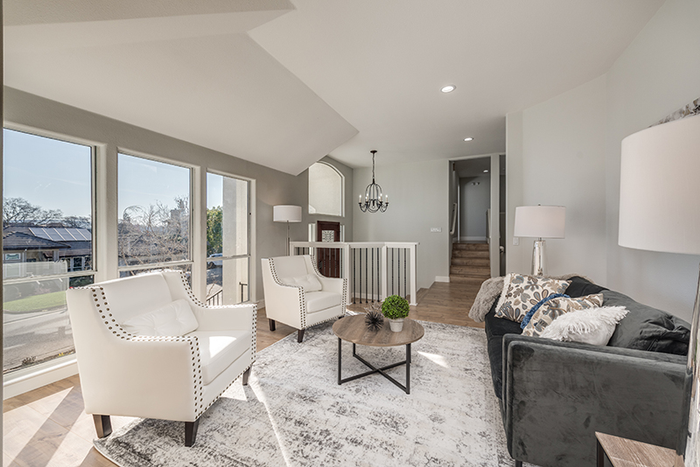 That said, there's no need to renovate your home in a style that doesn't speak to you. Fortunately, there are professionals who can help style your home to make it as aesthetically pleasing as possible to potential buyers when it's time to sell: home stagers. Stagers may rearrange your furniture and décor, display new art, or help to declutter your home so potential buyers can better imagine themselves in your space. Jake says hiring a home stager upon completion of their renovation made a huge difference in their bottom line. "We partnered with Danielle Miller with Studio D Staging & Redesign (studiodstaging.com) in El Dorado Hills and got five offers—all above list price—and went to escrow in five days," he says. In total, the entire project went from start to sold in just 10 weeks.
While the crisp colors and high-end finishes in this modern farmhouse home may inspire major renovation envy, remember that not every home renovation needs to be in the six figures to be impactful. In their 2019 Remodeling Impact Report, the National Association of Realtors polled homeowners on the impacts of painting a single interior room—one of the most affordable home improvement projects homeowners can do without hiring a skilled professional. Sixty-one percent of survey respondents said that painting a room increased their sense of enjoyment when at home, and 75% reported feeling a sense of accomplishment when looking back on the project. According to Jake, homeowners can take on other small projects themselves, too, if they have a bit of extra time and budget. "Some flooring can be done by a homeowner with some practice," he cautions, "but expect it to take longer and be more expensive than what you anticipate!”
Photos courtesy of Terra Inc. Construction.