Folsom residents Heather and Matt Kocina met with Kent Eberle, MCR, CKBR, UDCP, CAPS, president of Eberle Remodeling (eberleremodeling.com) in March 2019 to discuss renovations on their two-story home. “Kent wanted to get an idea of what we were looking for, and we wanted to get any suggestions he had for us,” Heather says. With an estimated (and accurate) timeline of about four to five months, the entire first floor renovation included gutting the couple’s closed-off, dark kitchen and transforming it into an open-concept space with a large island for entertaining and top-of-the-line appliances—including three ovens! Here, the Kocinas and Eberle share how this kitchen went from drab to fab. 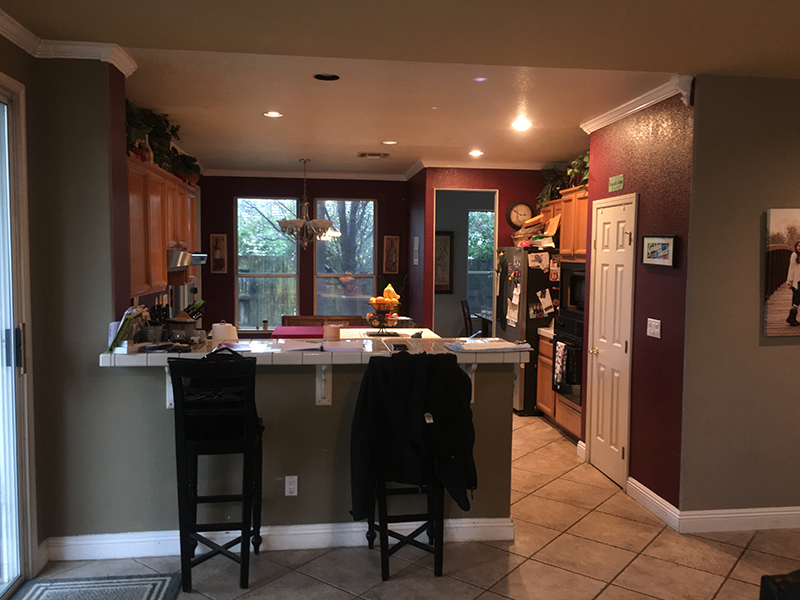 The Before: photo courtesy of Eberle Remodeling.

Making Plans
Following the initial consultation, Eberle presented a general timeline for the design and product selection, a detailed proposal for construction and an overview of the construction phases. Once the agreement was signed, the Kocinas received a detailed schedule. Heather’s cousin helped Matt with the demolition during the first week of July 2019. Eberle Remodeling started construction the following week, and the whole remodel was completed just before Thanksgiving, allowing the Kocinas to host a family celebration with nearly 60 guests.
Budget and Timing
Since the kitchen renovations were part of a larger remodel, the budget was not itemized for each project. Eberle says typical kitchen remodels can range from $75,000-$150,000, with costs varying based on the design details, scope of work, and quality of products utilized. For timing, Eberle says kitchen remodels gutted to the studs, like this one, would take between six to 10 weeks, depending on the size and complexity of the project.
Kitchen Essentials
The Kocinas wanted as much of an open concept as possible with the largest island that could fit in the space. They felt it was worth investing in top-of-the-line appliances, all of which are by Wolf. Eberle was tasked with creating a larger island to increase functionality and to build a space that felt more welcoming. The team removed the existing peninsula and small island, both of which limited accessibility to the kitchen. They re-configured the kitchen with a new layout, narrowed the depth of the existing pantry, and added a double oven underneath the existing stair landing.
Getting Started
The Kocinas had weekly and monthly construction plans from Eberle, which helped with their budgeting as well as provided an overview of the construction phases. Taking the couple’s wish list into account, Eberle planned the layout and function of the remodel. The couple hired Lindsay Tate of Lindsay Tate Designs (@lindsaytatedesigns) to pick out all the finishes. “We hired Lindsay about a month into the process, and had to change some of the original choices my husband and I selected, because we had no clue what we were doing,” Heather says. “We watched HGTV and browsed several magazines and websites to find the style that we both liked, but to put everything all together to make it look like a dream model home is another thing!”
Living Without a Kitchen
During the construction, the Kocinas moved to the second floor of their house, which allowed the contractors to have the space and time to work. “We could not use our kitchen for four months. We made it work, because we knew there was a bright light at the end of the remodeling tunnel,” Heather says. “Make sure you have a great support system to help you out. Since we did not have a kitchen or laundry room during this time, my mom cooked us dinner every night and helped out with our laundry.” 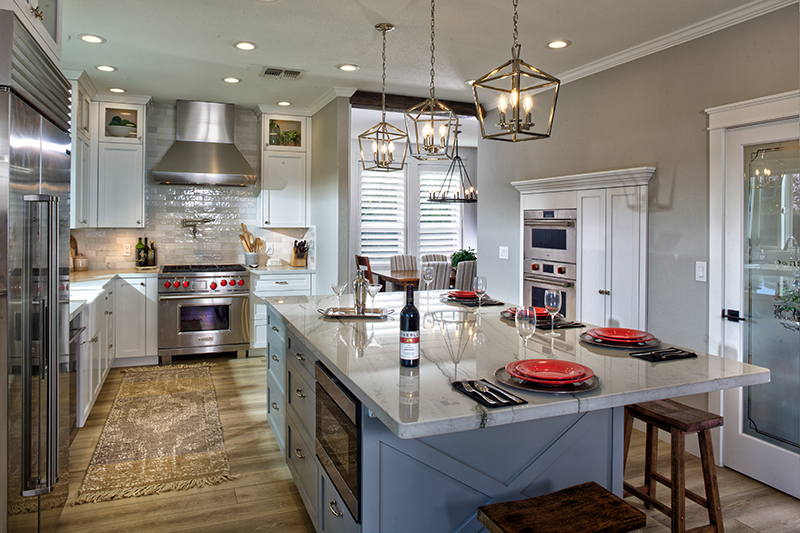 The After: photo courtesy of Eberle Remodeling

The Big Reveal
Overjoyed by the results of the complete kitchen renovation, Heather cried happy tears upon seeing their dream kitchen. She loves the big island with a Mont Blanc quartzite countertop, which seats eight to 10 people comfortably. Kings Custom Cabinetry (kingscustomcabinetry.com) designed the custom cabinets, which feature shaker style doors, hidden light rails, dovetailed drawers, rollout drawers, and soft close drawers and doors. “I feel like a professional chef with all the high-end appliances and gadgets around me,” she says. For Eberle, the balance between the aesthetic of the kitchen as well as the functionality of the space made this kitchen renovation stand out.
by  KOURTNEY JASON

7 Things to Know Before You Gut Your Kitchen

Thinking of a kitchen remodel? Here’s what you need to know before you get started.