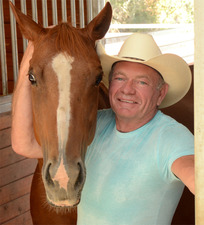 Roby now lives on a six-acre ranch outside of town with his three horses, but his path from a corporate world to a rural one wasn’t direct, or easy. In 2004, both of Roby’s parents passed away within a year of each other. Prior to this time, Roby had been forced to quit his San Francisco job to help out at home, and their subsequent deaths caused him to rethink his life, and his career. He decided to channel his grief into helping others and soon found a job at New Connections, a drug and alcohol rehabilitation center in Concord. Later, when a position arose at the El Dorado Community Foundation (EDCF)—an organization helping local charitable organizations raise funds and become self-sustaining—Roby jumped at the opportunity. He’s now EDCF’s executive director, and nothing gives him more satisfaction than bringing together his new “family” of community-minded people. “I was brought here by a power greater than myself,” Roby shares. “It all just fell into place.”